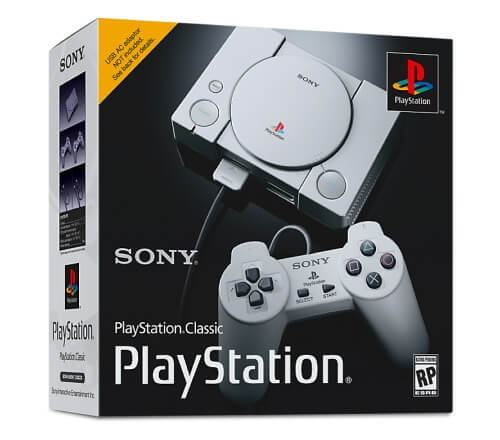 Following the enormous success of Nintendo’s NES Classic and SNES Classic retro consoles, Sony are getting in on the act by resurrecting their beloved original PlayStation. Compare over 2 PlayStation Classic listings from 1 leading game retailers, with prices from just £87.99 to £109.66.

Don't forget to use our handy filtering system to help find your ideal PlayStation Classic deal.

Learn more about the PlayStation Classic

Following the enormous success of Nintendo’s NES Classic and SNES Classic retro consoles, Sony are getting in on the act by resurrecting their beloved original PlayStation. First released in the UK more than 20 years ago, in 1995, the PlayStation is remembered fondly by millions of gamers across the globe.

Sony’s first foray into the gaming scene, the first console in the incredibly successful PlayStation line introduced us to games such as Crash Bandicoot, Gran Turismo, Driver, Tekken, Spyro and many more. With 3D graphics that far outstripped those seen before on a home console, a vast library of games and a controller design that instantly became iconic, the PlayStation was a roaring success.

By the time it was replaced by the PS2, the PlayStation had become the best-selling home console of all time (since usurped only by the PS2) and established Sony as a major player in the gaming world. Now, you have the chance to experience what made the PlayStation such a success all over again.

PlayStation games defined their generation of gaming, and have had a significant influence on everything through to modern titles. Now you have the chance to experience them all over again with the PlayStation Classic!

Of course, no true PlayStation nostalgia session would be complete without some local multiplayer mayhem! The PlayStation Classic comes with two replica original PlayStation controllers, so you're ready to go with two players straight away. 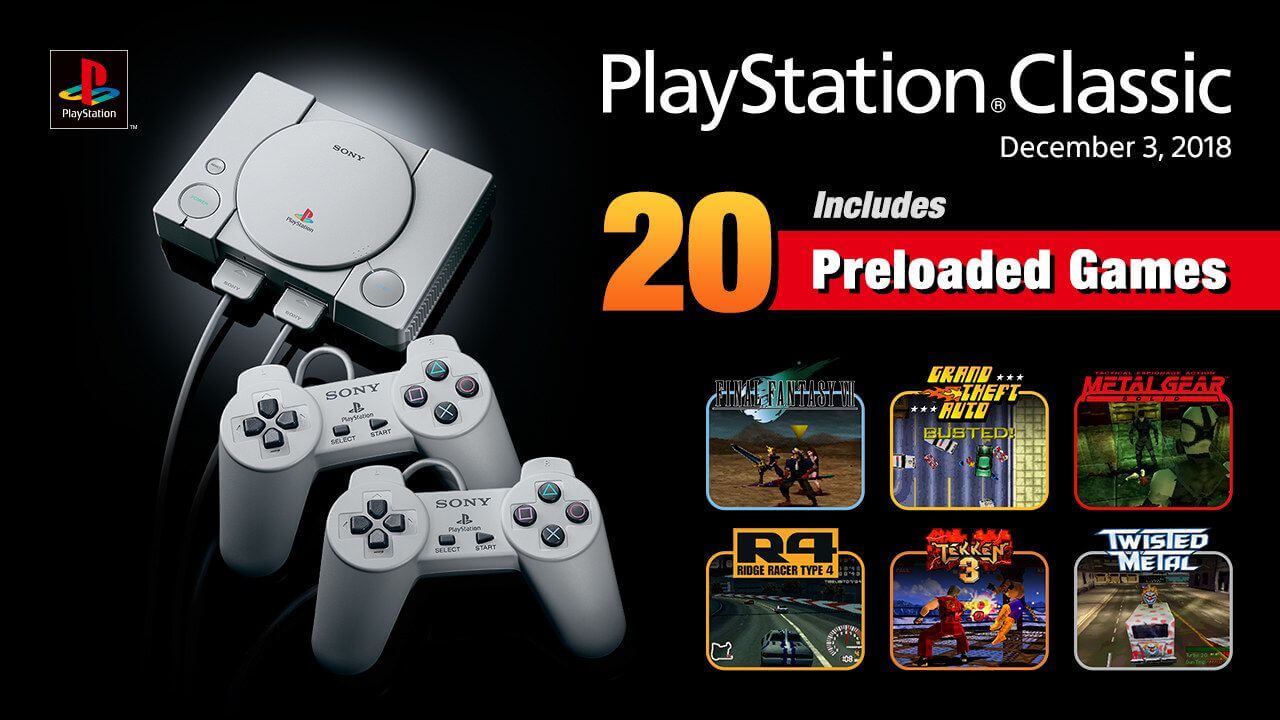 The grandfather of all 3D fighters that have come since, Battle Arena Toshinden blazed the trail followed by Tekken and Soul Calibur.

Hit the slopes with one of the first extreme sports sims of the 3D era. Rack up huge skill scores as you race to complete a variety of courses as fast as possible.

From the studio that would go on to produce the hugely popular Driver series, Destruction Derby remains a cult classic.

One of the most beloved titles of all time, Final Fantasy VII has earned a status as one of the best RPGs ever.

The game that launched an empire. Grand Theft Auto may be in a top-down format that has long since disappeared from console iterations of the series, but it retains the same sense of fun, exploration, and humour.

An innovative puzzle game, Intelligent Qube remained popular for years after release in 1997 thanks to addictive, challenging gameplay.

Collect jet pods and save the world in this revolutionary 3D platformer.

An all-time classic, Metal Gear Solid remains to this day one of the most beloved titles of all time, its mixture of stealth and storytelling still cultural touchstones to this day.

The original in the hugely popular series, Mr Driller is a puzzler that sees you tunnelling through levels while avoiding falling displaced blocks.

Proof that the PlayStation wasn't merely a proving ground for early 3D, Oddworld was a success thanks to memorable character design and tight controls.

The game that gave the world its best loved limbless French character, Rayman stands up today as a masterclass of presentation and boasts solid gameplay to match.

Yet another landmark game, Resident Evil launched the survival horror genre and with it a truly legendary series of titles.

The first in the Persona series that continues to this day on the PS4, Revelations never actually made it to European shores on original release, meaning this is the perfect opportunity to dust off this RPG.

Though its name might sound a bit more like a Street Fighter title, Super Puzzle Fighter II Turbo is a cartoony puzzler that has spawned a sequel as recently as last year.

Described upon release as a mix between Metal Gear Solid and the N64's Goldeneye, Syphon Filter itself became highly influential, with advanced AI and engaging gameplay.

One of the definitive fighting games ever, Tekken combines a memorable roster of characters with fast, fluid gameplay.

Yet another famed series that had its first title featured on the PlayStation, Tom Clancy’s Rainbow Six garnered a reputation for tricky, tactical gameplay.

Twisted Metal is a surreal destruction based driving game, in which you must compete with other drivers in a battle royale-style contest to win the annual Twisted Metal competition.

Venture into the old west with Wild Arms, an RPG with an innovative battle system.