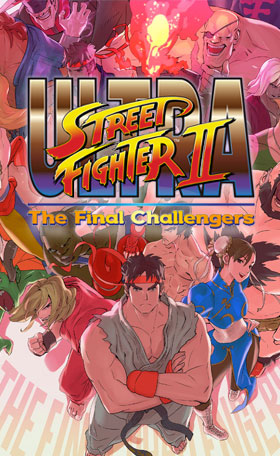 Find the best deals on Ultra Street Fighter II: The Final Challengers for Nintendo Switch. We compare 7 deals (starting from £24.99) across every edition offered by our partner retailers.

Whether it’s reliving your childhood or discovering it for the first time, Ultra Street Fighter II: The Final Challengers is a worthy reboot of what is considered by many to be one of the greatest fighting games ever created.

Ultra Street Fighter boasts two distinct graphical styles – the classic pixel art as well as updated HD graphics – as well as a roster of 19 different characters, so no matter if you’re a tactical fighter or one who likes to go with all out brawn, there’ll be a character for you.

Better yet, you can now experience the fighting game that is still played competitively all over the world on the move, thanks to the Nintendo Switch’s handheld and table top modes. You can also face off against a friend without any additional controllers, with each half of a pair of Joy-Con controllers functioning as a stand alone controller in multiplayer!

Get a feel for the gameplay and various modes, including online, present in Ultra Street Fight II!