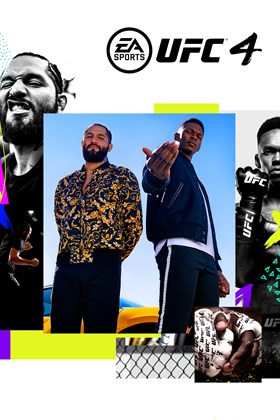 Find the best deals on UFC 4 for PS4, Xbox. We compare 51 deals (starting from £17.31 across every edition offered by our partner retailers.

UFC returns following a two-year hiatus to act as the #1 MMA video game, letting mixed martial arts enthusiasts everywhere pound, kick and grapple their way up once again to the top. Stepping into the Octagon has never looked or played better thanks to a significant graphical upgrade, with character models and environments impressing on a visual level whether played on PS4 or Xbox One. UFC 4 has been worth the wait.

UFC 4 is your chance to shape your own fighting legend within the all-new career mode, in which you can create your own custom fighter and work your way through the slums up and into some of the most recognisable MMA venues. You’ll be banging it out in the backyard one minute and then surrounding yourself by hundreds of fans the next. Such immersive environments help to better sell the fantasy of what it means to become the ultimate fighting champion.

A technology called Real Player Motion makes its debut in UFC 4, allowing for fighters to clinch and grapple more realistically – to the point that it’s driven by player positioning and their physical context. Elements like this combine with believable punch and kick animations to help bring the world of MMA to life. Players will experience a larger spectrum of outcomes as a result.

While the likes of Floyd Mayweather and Tyson Fury have been UFC mainstays starting in previous entries, this fourth entry marks the debut of other heavyweights including Pedro Munhoz and Calvin Kattar. All fighters have had their likenesses scanned in using the latest tech, so players can rest easy knowing that they look and handle like their real-life counterpart.

Online Blitz Battles keep you on your toes

The biggest change to online tournaments comes in the form of UFC 4’s new Blitz Battle mode, where players must duke it out with other fighters in six rounds of rapid fights. The rulesets keep changing from round to round, ensuring that players don’t rest on their laurels and must constantly shake up tactics in order to succeed.