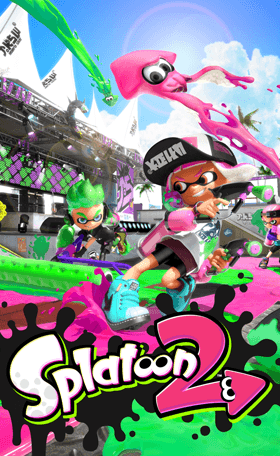 Find the best deals on Splatoon 2 for Nintendo Switch. We compare 28 deals (starting from £36.99) across every edition offered by our partner retailers.

Splatoon surprised many when it became one of the most enduring and popular games on the Wii U. Nintendo have rarely dabbled in what could be termed as more adult themed gaming genres, with shooters being a prime example. However, by replacing bullets and other ammunition with a type of inky gloop that let players cover not only their opponents but the stage as well gave the game a child-friendly spin that proved immensely popular.

Splatoon 2 takes that winning formula and runs with it, making everything bigger and better. A single player story mode picks up where the last game finished, and allows players to adventure through a colourful world that combines platforming and shooting skills. The multiplayer offering, Splatoon 2’s key feature, can be accessed either online or locally, with two players able to play on one Switch.

New multiplayer modes, including a survival-style game entitled Salmon Run, will join the immensely popular Turf War mode from the first game. Another returning feature will be Splatoon’s celebrated squid mechanic, which allows players to teleport from place to place on a map via the ink fired from weapons.

See what Splatoon 2 has to offer beyond its multiplayer mayhem!