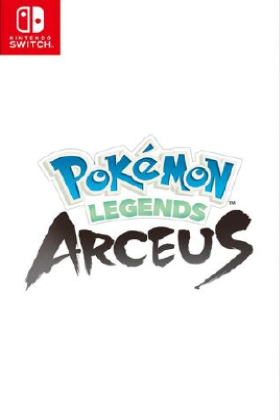 Find the best deals on Pokémon Legends: Arceus for Nintendo Switch. We compare 8 deals (starting from £42.85 across every edition offered by our partner retailers.

Following years of fan outcry and ensuing speculation, the Pokémon franchise will finally be going open world for an all-new spin-off instalment. It’s called Pokémon Legends: Arceus and takes place during an ancient time of the world, rolling back the clock to let players roam a version of the Sinnoh region set centuries before the one we saw in Pokémon Pearl and Diamond. Developer Game Freak is pulling out all the stops to make this creature collecting outing feel unique.

Pokémon Legends: Arceus will release exclusively for the Nintendo Switch during the early part of 2022. It very much takes inspiration from the likes of The Legend of Zelda: Breath of the Wild, presenting players with a much more open take on a land they thought they knew. You’ll still be battling wild Pokémon and exploring different territories, only now you’re not confined to the linearity of established routes and can instead travel wherever you like.

Explore the history of Sinnoh in Pokémon Legends: Arceus on Nintendo Switch

Set in a feudal Japan-inspired version of the Sinnoh region, Pokémon Legends: Arceus documents your journey to create the very first Pokedex. This you do by travelling freely across a range of terrain types, carefully sneaking up behind wild Pokémon and engaging them in battle. It takes place at a time when not everything was known about the world’s favourite collectible creatures, imbuing you with a sense of unknown discovery. For all these reasons and more, Pokémon Legends: Arceus is a first for the franchise.

Pokémon Legends: Arceus is the first game in the popular JRPG series to let you pick between three starters from totally different generations. In this case you have the choice of Rowlet (from Sun and Moon), Oshawott (from Black and White) and Cyndaquil (from Gold and Silver). All three still fall into the tradition of being a grass, fire and water type Pokémon.

Exploration and discovery are core to the experience in Pokémon Legends: Arceus, and being inspired by Link’s latest Nintendo Switch outing means you’ll be doing so in ways that are new for a Pokémon game. Expect to be climbing mountains, flying over the ground below you and using tall grass to sneak around enemies and Pokémon. These actions have appeared in the series before, but Pokémon Legends: Arceus will have you doing it in real-time within the open world setting.