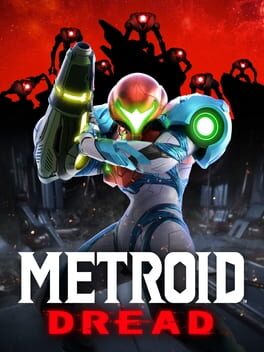 Find the cheap deals and prices on Metroid: Dread for Nintendo Switch. We compare 43 deals (starting from £34.99 across every edition offered by our partner retailers.

19 years after the last original 2D Metroid game released on the Gameboy Advance, the previously shelved fifth entry has resurfaced and made its grand return as Metroid: Dread for Nintendo Switch. It comes from the same developer behind 2017’s remake of Metroid II, MercurySteam, who have built upon the planned initial blueprint to deliver a modern action game centred around one of Nintendo’s most iconic characters.

Picking up directly from where Metroid: Fusion left off, Dread finds bounty hunter Samus Aran trapped on yet another planet. This time, however, she’s facing a totally new threat. Because while she’ll need to be careful so as to not disturb by the native alien wildlife, as the name suggests there’s also danger around every corner. In Metroid: Dread it’s a series of EMMI defence robots who will pursue Samus when spotted, adding an extra dynamism to Metroid’s typical exploratory gameplay.

Explore and survive on a planet full of secrets in Metroid: Dread on Nintendo Switch

Samus has explored various hostile worlds in the past, but planet ZDR has its own unique gamut of dangers for her to fend off against. Luckily classic abilities like the Screw Attack, Morph Ball and Spin Jump all return, alongside more modern control options such as free-aiming and the counter punch. Metroid: Dread intends to be a perfect blend of the old and new, encouraging you to dig into planet ZDR’s mysteries while trying to survive against monsters and robots.

It wouldn’t be a Metroid game if your weren’t actively encouraged to double back and re-visit previous areas with all-new gear and equipment. Alternate paths and hidden locations are just waiting to be discovered, and you’ll need to use these fresh abilities to progress and see everything. Just be sure to explore the sprawling map while avoiding the many dangers that lay ahead.

To celebrate the release of Metroid: Dread on October 8th, 2021, Nintendo is also releasing an two Metroid: Dread amiibo in a standalone package. One figure features Samus in her newly coloured armour, while the other depicts one of the 7 EMMI pursuit robots you’ll spend much of the time avoiding. Both figures are expected to offer some form of in-game functionality.