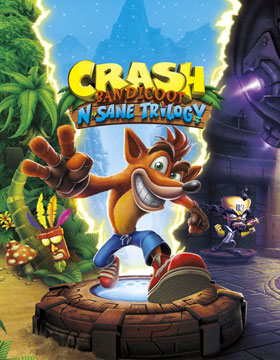 Find the best deals on Crash Bandicoot N.Sane Trilogy for Nintendo Switch, PC, PS4, Xbox. We compare 49 deals (starting from £16.99) across every edition offered by our partner retailers.

In this age of mind-blowing graphics and intricately complex gaming mechanics, it’s hard to imagine a simplistic game, relying on little more than devilish platforming design making the cut. However, Crash Bandicoot N. Sane Trilogy succeeds at doing just that.

Few games can claim to have defined a gaming generation as Crash Bandicoot can. Two decades on from the original PlayStation’s launch, it’s hard to think of another series which enjoyed such complete and total domination of a console as Crash did on the PS1. The classic original spawned two successful platforming sequels, as well as a hugely popular karting spin-off.

Famed for its memorable cast of zany characters, Crash’s bright, colourful graphics bely a difficulty that has made the series’ a legendary challenge. Taking the three original Crash Bandicoot platformers, the N. Sane trilogy remasters these beloved titles with striking graphical enhancements that keep the series’ looking fantastic on even the very best modern hardware.

This brilliant package, combining three classic titles in one, is a must-own for any former PS1 owners and beyond!

Get your first dose of nostalgia with the official Crash Bandicoot N. Sane Trilogy trailer.

See what IGN have to say about the N. Sane trilogy.