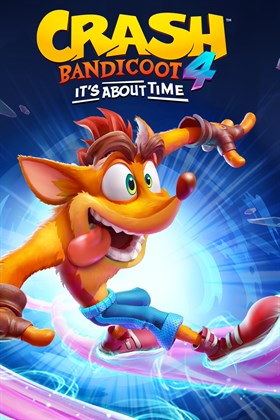 Crash Bandicoot 4: It's About Time

Find the best deals on Crash Bandicoot 4: It's About Time for Nintendo Switch, PS4, PS5, Xbox. We compare 58 deals (starting from £27.95 across every edition offered by our partner retailers.

Following on from the release of Crash Bandicoot N. Sane Trilogy back in 2017, Activision is looking to maintain the 3D platforming hype with an all-new entry into this much beloved franchise. Crash Bandicoot 4: It’s About Time is pitched as the canonical fourth entry of the series, disregarding everything from Wrath of Cortex onward to bring the franchise back to its roots. Expect lots of frantic spinning, plenty of box hopping and Crash’s general sense of zany humour.

Crash himself has seen a drastic redesign, looking good and now equipped with all manner of new abilities that will help him take on his arch nemesis Neo Cortex while travelling through multiple periods across time. What’s known as Quantum masks, when equipped, allow Crash to bend the rules of reality in interesting ways, letting him overcome different obstacles.

A time-spanning 3D platforming adventure designed for PS4, Xbox One and PC

Whereas the N. Sane Trilogy quite rightly stayed faithful to the original series format in order to recapture the first three games, Crash Bandicoot 4: It’s About Time has been specifically designed with current-gen consoles in mind. This has allowed new developer Toys for Bob to find the perfect blend of the old and new, opening up levels slightly and introducing new mechanical elements like thew ability to play as Neo Cortex in addition to Crash and Coco.

The first original Crash Bandicoot game in over 10 years

Crash Bandicoot 4: It’s About Time has that subtitle for a reason, being the first new canonical series sequel to release in over a decade. Luckily the hilarious 3D platforming of yesteryear remains intact and the new time travel conceit enables the developers to get extremely creative with levels. You’ll be spinning your way through pirate ships, the prehistoric age and much more.

In addition to just jumping and spinning, Crash Bandicoot 4: It’s About Time introduced what are called Quantum Masks that allow Crash to navigate levels extremely uniquely. Flipping gravity, slowing down time… all these abilities and more let you defy the laws of physics and will transform Crash so that he’s better equipped to deal with platforming puzzles and obstacles.