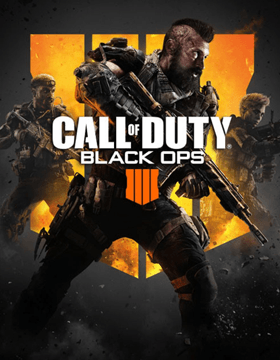 Find the best deals on Call Of Duty: Black Ops 4 for PS4, Xbox. We compare 43 deals (starting from £4.97) across every edition offered by our partner retailers.

After 3 years, Call of Duty returns to the Black Ops universe with Black Ops 4 (IIII). Unlike previous entries in the Black Ops series, Black Ops 4 has no single player, instead solely focusing on a high octane multiplayer experience.

With a range of different playable classes designed to suit your playvstyle, Black Ops 4 also comes with a range of multiplayer modes. As well as the classic deathmatches and other traditional modes, the most notable addition is that of Blackout, a dedicated battle royale mode that is certain to be the must-play addition to the game.

As either a solo player, part of a duo or a member of a squad, you’ll pit your wits against up to 100 other players and fight it out for ultimate supremacy. After landing on the gigantic map, it’s up to you to scavenge weapons, medical supplies and vehicles to propel yourself to victory. It’s a similar mode to that of PlayerUnknown’s Battlegrounds and Fortnite, both of which have been enormous gaming phenomenons in recent months. Call of Duty Black Ops 4 could yet prove to be the biggest battle royale hit of them all.

Five classic Call of Duty maps will make a return to the delight of long-term fans. Additionally, there’s new exciting locations, including Ancient Greece and the RMS Titanic. That’s not all. Zombies mode is back as a co-op mode, with additional customiseable options, including what sort of enemies you’ll face.

Don’t forget that there’s nowhere better to find the best prices and deals for the game than Console Deals!

“You give us the fire, we’ll give ’em hell” See what Call of Duty Black Ops 4 has in store with this incredible cinematic trailer!

Watch the staff over at IGN record a victory in a duo version of Black Ops 4’s Blackout mode, the battle royale mode that is sure to be the game’s most popular mode.