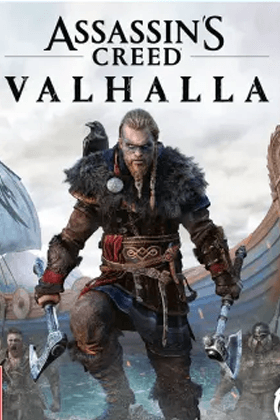 Find the best deals on Assassin's Creed Valhalla for PS5, PS4, Xbox and more. We compare 124 deals (starting from £27.19) across every edition offered by our partner retailers.

Following on from Assassin’s Creed Odyssey in 2018, Ubisoft’s highly polished stealth-em-up franchise finally returns in 2020 with a new entry set during the Viking era. Seeing you blaze your path from Norway to England as either a male or female incarnation of Eivor, it merges a noticeably dark (though beautiful) open world with visceral combat and is sure to be one of the year’s biggest Triple-A releases.

With this new Nordic setting comes a boatload of new mechanics and features to the Assassin’s Creed framework, such as an emphasis on duel-wielding, having to grow your community settlement and even the art of flyting, which was historically a form of Viking rap battle. Elements like this combine with the series’ traditional mix of exploration and thoughtful combat, deepening the Assassin’s Creed experience much further.

No Assassin’s Creed entry would be anything without a badass new protagonist, and luckily Valhalla delivers the goods in that sense. You’ll be able to build your own version of Viking warrior Eivor, who you can play as either a man or a woman, making decisions and completing missions that will subtly change the outcome of this sprawling story. Odyssey handled this aspect well, and Valhalla one ups this in almost every way, letting you select different dialogue choices and outfit your version of Eivor with whatever type of weapons and armour you choose. Plus, 9th century England is a thrill to explore either on current or next-gen consoles.

Take part in and lead epic raids against your enemies

While Assassin’s Creed Valhalla will be full of single-player missions for you to sink your hidden blade into, a new mission type crops up in raiding. It is here where you must lead your Viking army into some fast surprise attacks against the Saxon armies. If successful, you’ll be able to claim all the riches for your clan and further invest it into your settlement.

Eivor’s journey begins in the native Viking country of Norway, before seeing you travel across the icy North Sea to 9th century England. These two locations alone are enough to indicate Assassin’s Creed Valhalla’s variety, with the environment around you quite literally changing the more time goes on. All this you explore from the comfort of your reliable longboat, which you can continually upgrade.