Last month, we brought you the news of what appeared to be the first Xbox One X hard bundle (i.e. where the game is bundled in the console itself). Featuring Forza Motorsport 7 alongside Microsoft's flagship console, the bundle was unusual in that there was very little fanfare around the launch. The box was also unusual; while most hard bundles feature the game's artwork prominently, the Forza bundle had just a small circular logo detailing the game included.

However, it appears that both the quiet launch and the box style is here to stay for the One X. This morning, we bring you news of not one but two new One X bundles. As far as we're aware, these bundles come with just a console, a controller and the game; neither appears to be packaged with a subscription to Xbox Live or the new Game Pass service. 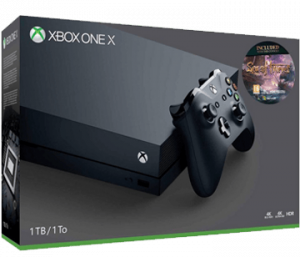 It's no great surprise that Sea of Thieves has received its own One X bundle. The title, developed by famed UK developer Rare, is one of the Xbox's major releases of 2018 and is, crucially, exclusive to the system. The game's graphics, which have received a good deal of praise, are also sure to benefit from the One X treatment. 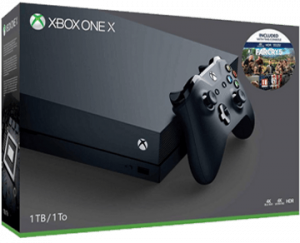 This is much less expected. Far Cry 5 is set to be one of the year's big games, and is cross platform. However, it hasn't had any sort of Xbox One S bundle like Sea of Thieves has. In fact, before this bundle emerged, it wasn't even clear who (if anyone) had secured the marketing rights to the game that enabled them to create bundles like this.

Far Cry 5 is set in an expansive open world with enough going on to put the capabilities of the entry level systems to the test. The One X is a natural home for it, capable of showing off just what incredible detail has gone into designing the world.