Having designed various types of controllers and peripherals for all three of the big console platforms, Nacon is still a big deal in the video game accessory space. From professional-level gamepads that help you step up your game in the latest FPS to stylish headsets that offer crystal clear audio, when Nacon put a new product out in the world, it’s always worth paying attention to. The latest one of the rack is what’s known as the Pro Compact wired controller designed specifically for Xbox consoles. It tries to do a lot with very little – literally – but the question is: does it pack the punch we now expect from a next-gen console experience?

As we’ll no doubt get into, it’s a bit of a mixed bag. The Nacon Pro Compact controller isn’t a bad offering, by any means, but it is one that may irritate a large portion of the gaming audience for one specific reason. It does, however, pack in lots of exciting technical features absent in a lot of other customisable Xbox gamepad options. Are said features primed to push your buttons? Let’s find out… 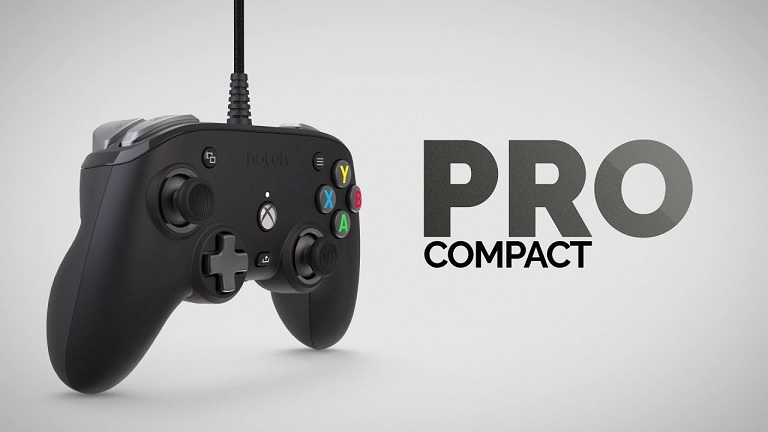 This is a third-party controller that keeps things smooth and stylish. Whereas some rival options tend to want to wow you with swappable components that end up making the final product a little garish, we’re pleased to report that the Nacon Pro Compact is a trim and nice-looking product. Available in both Black or White (to match either the Series X or S), Nacon sent us the latter for this review, and it really makes for a clean aesthetic. We particularly grew to like the textured matte surface on both the front and back of the controller. Going for glossy could have risked the Nacon pro looking cheap, but the more muted surfaces results in the opposite effect and feels good in the palm.

Obviously in contrast the white controller’s overall pared-back colour palette are the black accents that come from the triggers, D-pad and analogue sticks. These match the colour of the 3M braided wire nicely, though, and help tie the gamepad’s style together. Lastly, in terms of style, you have the Nacon Pro Compact’s face buttons. These are definitely more pronounced than what you’d find on Xbox’s official gamepad solution, especially since the letters appear larger and make full use of all four colours. Is this ideal? Probably not. But it’s not a deal-breaker and the controller will still look good sitting next to your white Xbox console when not in use.

As with most third-party controllers, the Nacon Pro Compact is fully functional with every iteration of Xbox from the One series onwards. This means that those still playing on the last generation of consoles have nothing to worry about when picking one up. Much like Microsoft’s own ethos, Nacon have been wise to have the Pro Compact stay fully flexible, to the point that it’ll always be recognised instantly as soon as you plug it in via a USB connection.

The Nacon Pro Compact is indeed wired, which may be a little disappointing to some. If you’re a die-hard Xbox player who likes the freedom that comes from not being tethered to your console, the Pro Compact won’t do much for you. A 3-meter cable is a great length, don’t get us wrong, but it can still be a hinderance in instances where the only USB slot you have left is around the back of your console – you instantly lost about a foot. That said, you won’t suffer any lag when using the Nacon Pro in competitive games thanks to the wired connection, and the gamepad’s wired nature obviously isn’t much of an issue when playing on PC.

Performance is where the Nacon Pro Controller really shines, not least due to the number of technical features and rampant customisation options it packs in. Despite it’s lightweight, small-ish design, those who constantly find themselves frustrated with re-mappable button limitations won’t find any barriers here. Now, admittedly, the one drawback is that a separate “Pro Compact” app needs to be downloaded to your Xbox to take full advantage. Whereas other third-party options will let you simply hold down a button to remap it to a different function, here it’s a little more involved but it’s worth it.

After downloading the dedicated app and connect the Nacon Pro Compact to your console, swapping a button’s existing function is as straightforward as selecting an alternate from the drop-down menu. So far, so understandable. However, where the gamepad really steps it up is in how you can also adjust the D-pad’s responsiveness and dead zone. Nacon have a number of pre-set options available in the app depending on the type of game you want to play – Racing, Sports, FPS, and so on – but this you can also fully tailor. Nacon really should be commended for offering Xbox players an unrivalled amount of flexibility and customisation with regards to control. Want to switch around the left and right sticks? Go for it.

And so we enter the make-or-break portion for the Nacon Pro Compact wired Xbox controller. You see, when Nacon say “compact” they actually really mean it. For once it isn’t just hyperbolic marketing speak. The Pro Compact is significantly squatter than the official Xbox controller, which can make reaching the back triggers a bit of a pain for players with bigger hands. We would go so far as to say that the Nacon Pro is borderline a nuisance to use in these cases. We know this because, when testing it out across a handful of multi-hour play sessions, it was a constant struggle to have it sit comfortably in the hand. Reaching to the shoulder buttons from the back triggers using our index fingers and back again also never felt natural.

We’re sure that Nacon has done its homework in developing a button layout and overall size that would perfectly suit smaller hands. If anything, this just goes to show how much of a struggle it is for those players to use the standard controller often included with consoles. However, this does nothing to help people with either regular or slightly larger-than-average sized hands who want to make use of the Pro Compact’s amazing flexibility, because the act of using it can be a pain (sometimes literally). “Ergonomic” is sprawled out on the controller’s box, and for half of the gaming audience we can’t help but say this simply isn’t true. Hoorah for Xbox players with smaller hands. For everyone else, though, the official Xbox controller wins out on comfort. 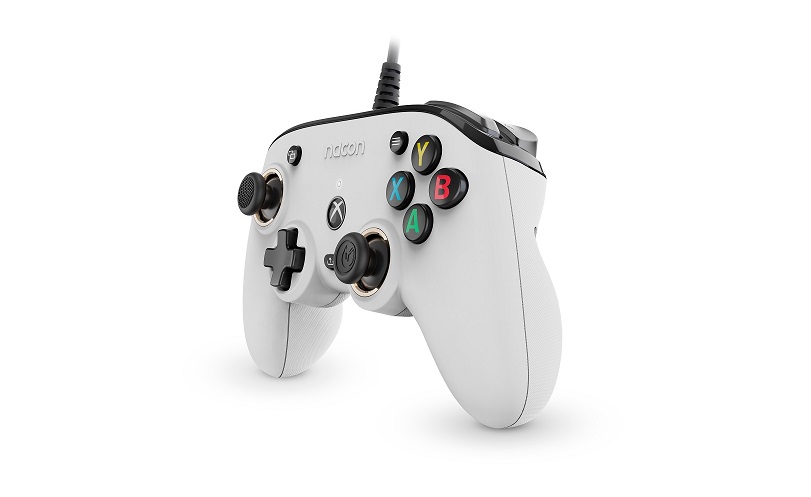 On the more positive side of things, the Nacon Pro Compact sells for a commendable £50 here in the UK – though you may find it slightly cheaper at select UK retailers. We’d say that’s a fair price overall for a gamepad as customisable and good-looking as this. And while you could probably find more competitive third-party options, it’s hard to argue that the Nacon Pro Compact represents a good value proposition. Just be sure to consider the size of your hands before committing to a purchase.

3/5
The Nacon Compact Pro wired Xbox controller is a valiant attempt at appealing to players who often struggle to get comfortable using a standard first-party controller. The side effect of this, though, is that this is a gamepad that struggles to be everything to everyone - for better and for worse. The extremely clean design, function and unparalleled amount of button customisation is to be commended, yet those who get on just fine with official gamepads will find using the trigger and shoulder buttons frustrating. Proceed with caution. 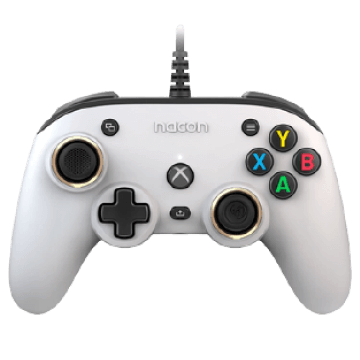