If you were to ask any Gears of War fan what they wanted to see next from the franchise, I doubt many would be frothing at the mouth for a turn-based tactics game in the style of XCOM.

It’s a testament, then, that by taking this longstanding Xbox franchise into a more strategic direction (and releasing exclusively on PC at launch, quite surprisingly) not only has developer The Coalition managed to reinvigorate the series with a jolt of new energy, but also ensured that this is still very much a Gears game – in spite of the new top-down perspective. Successfully reformatting all the franchise’s familiar hallmarks – such as chainsaw executions, enemy downs and a general sense of hulking badassery – Gears Tactics adds a lot more weight to each of them thanks to a strong focus on action, a clean UI and an engrossing single-player campaign. Simply put, it’s a rollicking good time!

Set roughly 12 years before the event of the original Gears game, the focus here is not on Marcus Fenix or the rest of Delta squad, but rather Gabe Diaz – father of Gears 5’s Kait – who is tasked with putting a COG squad together to take down a new Locust menace. And yes, you did read that correctly. As this is a prequel story to any prior event Swarm enemies are nowhere to be seen here, and I’d be lying if I said that it wasn’t nice to be fighting against Gears’ classic Locust enemy during their peak.

Its emphasis on story is arguably what sets Gears Tactics apart from the likes of XCOM and Phoenix Point the most, with The Coalition treating it as an equally important part of the series canon. The development of its two lead characters Gabe and Sid Redburn are evidence of this, as is the inclusion of fully-fledged cinematic cutscenes that really sell you on the idea that Gears Tactics is a true Gears game and not just a spin-off that warrants forgetting. There are three acts to play through in total, each featuring mission chapters that gradually ramp up in difficulty thanks to new enemy types being introduced and some seriously challenging multi-phase bosses that will test your strategic shooting ability.

Battles in Gears Tactics might entirely play out in turn-based fashion, but there’s a quick sense of pace given to every skirmish thanks to the number of moves each unit can make. Whereas other games of this ilk seem to want to stick to two action points, Gears Tactics grants you with three – which is more than enough to have a squad member, move, shoot and then set up for Overwatch. Even on the standard difficulty setting battles never feel too easy, though, mainly due to your Locust foes having the exact same capabilities. Needless to say, managing all four COG members efficiently means knowing each class’ special skills, and it’s through these that you’ll stand a fighting chance. 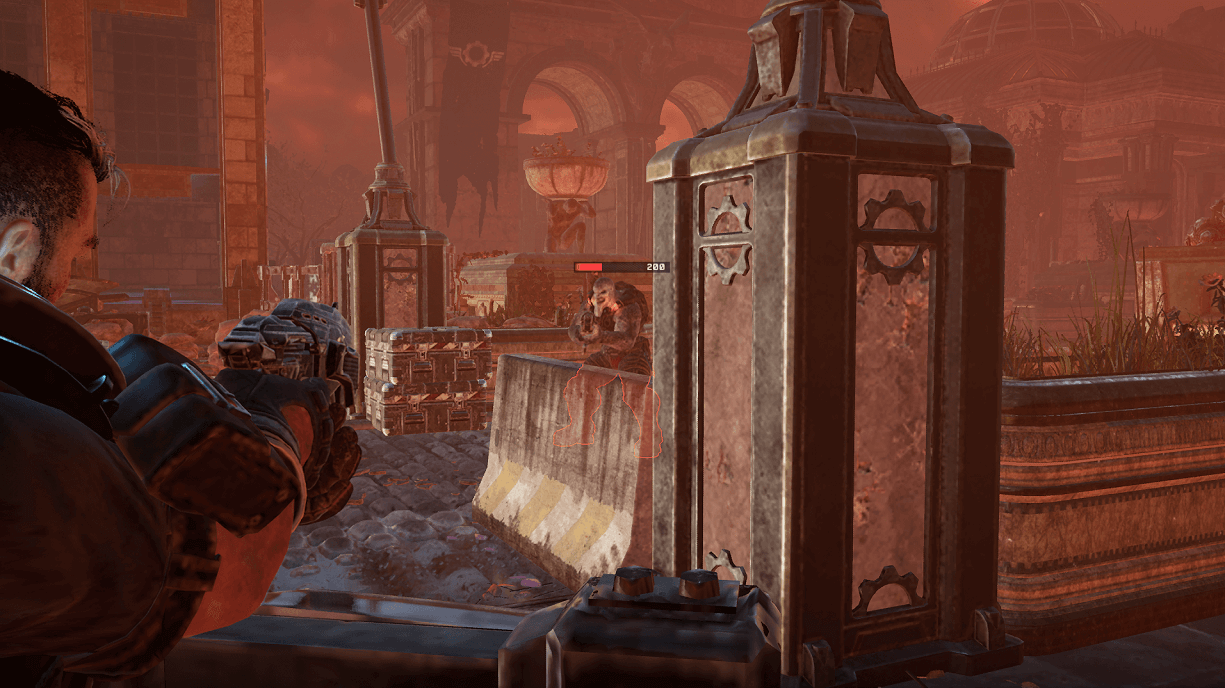 There are five class types featured – Heavy, Vanguard, Scout, Sniper, and Support – all of whom boast roughly 30 different skills that can be enhanced in their skill tree once they level up. And while main characters are given pre-determined classes and won’t suffer from permadeath, you’ll recruit and rescue other COG soldiers that are procedural generated and always at risk of falling. Luckily, Gears Tactics does throw you a lifeline in particularly tough battles, granting each of your units with a second wind ability that will let them revive once per chapter with just one action point. Features like this makes Gears Tactics less of a grind, doing well to ease in series fans that are new to this genre.

On the visual side of things Gears Tactics gets the job done just fine. I’d say it’s a lot more impressive than any XCOM game, but at the same time the level of environment and explosion detail will be dependent on your PC’s graphics card. I played on a gaming laptop equipped with a GTX 1070 on medium settings and could always run the game at a smooth 60 fps. Gears Tactics was never going be able to match the graphical powerhouse that is Gears 5, but it marks a major step up over most other strategy games.

I mentioned in the intro how well integrated several of Gears of War’s established conceits were. One of the best examples of this are the emergence holes, whereby at any moment the ground will crack and hordes of Locust will start to crawl out. Dealing with them in Gears Tactics works much in the same way as it does in the main series, only in the new layout, knowing they could pop up anywhere before your turn makes the appearance of unannounced enemies more dangerous than they’ve ever been. Wretch enemies are the worst for this, so be sure to have your units reloaded and primed for Overwatch in these instances.

Gears also hasn’t lost any of the other games’ gore factor in the jump to a top-down perspective. Deal enough damage to a Locust and they’ll likely enter a downed state rather than die, enticing you to get up close and personal with a lancer execution. Enemies have a habit of covering any downed ally with Overwatch to prevent you from doing this. However, by taking this risk you’re not only rewarded with a grizzly kill animation, but possibly a stat increase or action point bonus, too. This is just one instance out of many where Gears Tactics challenges you to balance a sense of risk/reward.

It’s quite clear that Gears Tactics has been developed with strategy veterans and newcomers in mind. You only need take note of how there is now map management to speak of included here, with Gears Tactics instead always pushing you onward to the next bombastic plot point. Sure, you return to your convoy mobile base of operations in between battles, but never in Gears Tactics do you need to worry about cities falling to enemy takeovers or civil unrest. Rather, you’re always encouraged to upgrade your characters, get into battles and get out. The result is a more fast-paced turn-based experience that cuts out the genre’s typical micro-management. It’s better for it.

Overall, Gears Tactics represents an exciting new change of pace for this classic series. It might be a prequel story you can only experience from a top-down perspective, but believe me when I say that this is well and truly a Gears of War game and not just some cash-in or experimental spin-off. As a strategy game it always empowers you thanks to quick-paced turns, understandable mechanics and the lack of permadeath. As a prequel story it offers some interesting context into the original COG-Locust war while still providing added texture to Kait’s narrative in Gears 5. Gears Tactics is a tricky balancing act, but it’s one that The Coalition has pulled off with flair and ease.