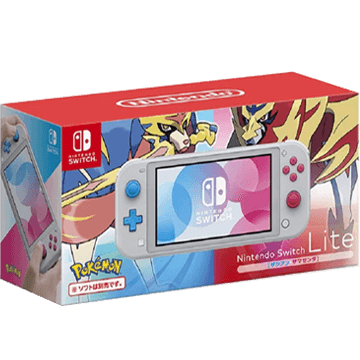 Compare 2 deals from 2 UK retailers, with prices starting from just 179.98 to 359.95 on the Nintendo Switch Lite: Pokemon Zacian & Zamazenta Edition. Our easy filtering system allows you to find the perfect deal buy your console today!

Since exploding on to the GameBoy back in the ’90s, Pokemon has been a fixture of Nintendo’s roster of beloved exclusive titles. Over the years, we’ve seen countless games, TV shows, films, and of course, special edition games consoles to tie in with one of the biggest pop culture phenomenons that the world has ever seen.

Coming in an exclusive light grey colour, the console reflects the colour of Sword and Shield legendary mascots, Zacian and Zamazenta, with blue and pink buttons giving the console a distinctive look. The back of the console features some dark grey etched decals of the two legendary Pokemon.

One thing to bear in mind when buying this special edition is that it does not come packaged with Pokemon Sword or Shield as standard. In the above comparison, you can see all the various bundle options that we’ve found, which include plenty of options to get both the console and your chosen edition of the Switch’s first original Pokemon title from a variety of different retailers.