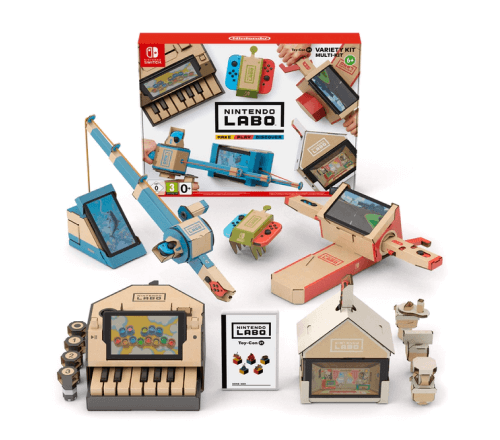 Browse 13 deals on Nintendo LABO for the Nintendo Switch from the UK’s biggest retailers, starting from just £3.95. We compare prices every single day to help you find the lowest price possible. 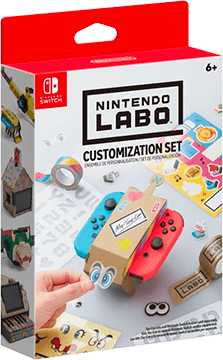 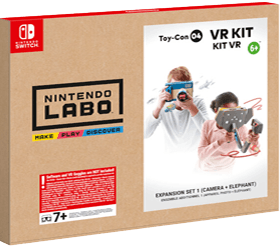 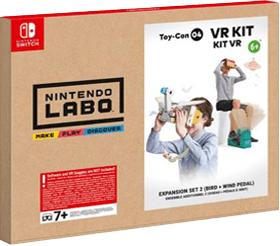 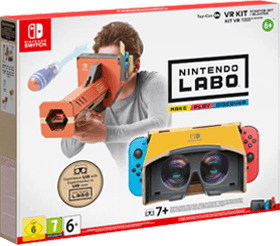 Be part of the latest innovation from Nintendo! Bring your Switch console to life with the aid of some brilliant cardboard creations. Combine these designs and models with some nifty software to bring them to life! Use the supplied models, or let your imagination run wild and create your own, then create custom software for them.

Currently, there are four LABO kits available. We’ve compared all the prices to find you the best deals above, but in case you need a bit of help figuring out which kit it is you want, read on…

The first LABO kit comes supplied with software and cardboard kits for five games in total – RC car, fishing rod, house, motorbike (now compatible with Mario Kart 8 Deluxe) and Piano. In addition, it also has some spare sheets that you can use to create your own designs, that you can then bring to life by creating your own programs.

Take on a monster challenge with the LABO 002 kit, which is so far the most complex released by Nintendo. Comprising of a backpack and a complicated handle system, the 002 backpack kit enables LABO to track your movements and turns you into a skyscraper-high robot that must fight other giant automatons within a city.

Then, we have the Nintendo LABO customisation kit. As the name suggests, this kit simply serves to allow you to breath more life into your cardboard creations, with a selection of stickers and tape to brighten up your designs. It comes with no software, and should be bought in conjunction with one of the other two kits.

Finally, there’s the Nintendo Labo VR kit, which allows your Nintendo Switch to be inserted into a cardboard-constructed unit that transforms it into a set of VR googles. Games like Breath of the Wild and Super Mario Odyssey have been updated to feature VR-specific modes to let you experience them in new ways, while other VR mini-games sold separately from the main starter kit let you mimic the actions of an elephant, bird and blaster.

How many different Labo kits are there, and what do they contain?

Likely to be the most popular Labo kit thanks to – as the name alludes to – the variety it provides. In all, there are five sets included, plus a couple of extra sheets of cardboard you can use to create some of your own inventions in the Labo ‘Garage’.

The included games are:

Fishing rod – build a functioning rod, line and all, and catch fish on the Switch screen

Motorbike – swerve through traffic with your homemade handlebars

Piano – play, practice and even compose on your very own mini piano

As the name suggests, the second Labo kit comes with just one kit – the robot. This elaborate backpack and headset gives you the power to fight giant robots as they rampage through a city.

This small set is designed to supplement either kit 01 or 02, and comes with tape, stencils and stickers to help personalisation your other Labo creations.

The latest Nintendo Labo skit allows players to experience games like the Legend of Zelda and Super Mario Odyssey up close, by transforming your Nintendo Switch console into VR goggles.

Will more Labo kits be released?

Though we have had no confirmation either way yet, it seems extremely likely that we’ll see more kits released in the future. The numbering system used on the first two kits – 01 and 02 – certainly hints at more to come. Who knows, perhaps Nintendo will wait to see what brilliant inventions people come up with and use those ideas in future kits?

How much does Nintendo Labo cost?

While the prices of the two kits may seem high given Labo’s cardboard construction, it’s worth noting that both kits come with the game card with the Labo software. Though we’re not currently aware of what Nintendo has in store next for Labo, it’s not an unreasonable assumption to make that future kits may be available without buying another game card, and thus will cost less.

Can I replace any parts?

One of the beauties of Labo is that it’s simple to replace should you break any of your parts. Whether you’ve crashed your car or accidentally punctured your piano, there are two solutions available to you.

Firstly, Nintendo have announced that they’ll be selling the cardboard layouts for individual sets. This means that if you damage just one of your models, you can replace it without having to buy the others or the software again. Currently, these replacement kits aren’t available on Nintendo’s UK store, but they should be soon.

Your second option is downloading the templates direct from Nintendo and applying them to any cardboard you’ve got lying around. This is particularly handy if you’ve damaged just one or two tiny components and have no need to purchase most of the model again.

Can I used Labo with any console?

No, Labo works only with the Nintendo Switch, not the Switch Lite. No older Nintendo consoles, nor any PlayStation or Xbox consoles, will work with it.

How long does it take to put the Labo kits together?

Each kit is different, with varying levels of complexity. Some, like the RC car, are expected to take only around ten minutes per car. Others, like the piano, with its intricate inner workings, can take upwards of three hours. Polygon have written a handy guide on the length of time each kit took them on average to put together.

Have we missed any questions you’d like answering? Get in touch with us and we’ll add it to the guide.

How does Labo work?

Nintendo have made a name for themselves over the years for their left field ideas. Nowhere is that truer in their latest innovation, the Nintendo Switch accessories called Labo. Labo combines sheets of cardboard with game software to help turn your Switch into an interactive gaming device like no other.

With Labo destined to become one of the must-buy gifts for any Switch owner over the next few months, we’ve put together the answers to just about every question you may have about starting your own Labo adventure!

Labo combines accessories with on-screen software to create interactive games. These accessories are made from cardboard, and come as flat sheets. It’s up to you to then construct them and use them in conjunction with the minigames that come on the game cartridge.

In addition to the specially designed kits, the Labo software enables you to design your own games and basic functions that you can then combine with your own cardboard designs. The only real limit is your imagination!