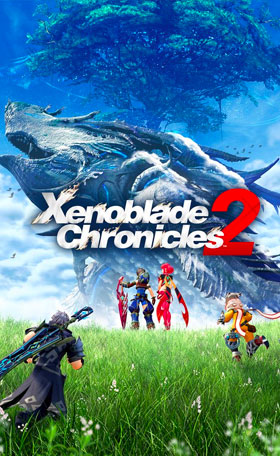 Find the best deals on Xenoblade Chronicles 2 for Nintendo Switch. We compare 11 deals (starting from £14.98) across every edition offered by our partner retailers.

Announced along with the Nintendo Switch, Xenoblade Chronicles 2 established itself early on as one of the new system’s most highly anticipated titles. With an all-new world and characters, Xenoblade 2 promises to delight both newcomers to the series and fans of the original alike.

Set in a world shrouded by cloud called Alrest, you take on the role of Rex, a young protagonist who finds himself embroiled in the battles between the various worlds of Alrest. Numerous different kingdoms and guilds built upon the backs of gigantic creatures called Titans compete in Alrest for supremacy and military power.

With turn-based combat, Xenoblade Chronicles offers players an almost inexhaustible variety of methods with which to do battle. Characters can be separated into ‘drivers’ and ‘blades’, with the latter influencing the abilities and powers of the former. Choosing which members of your team to use and which abilities to leverage in key situations can be the difference between victory and defeat.