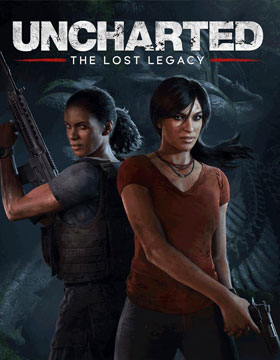 Find the best deals on Uncharted: The Lost Legacy for PlayStation 4. We compare 12 deals (starting from £4.98) across every edition offered by our partner retailers.

Embark upon a completely new adventure in Uncharted: The Lost Legacy. Following on from the colossal success of Uncharted 4 back in May 2016, The Lost Legacy picks up where the last game left off.

You play as Chloe Frazer and must adventure through India in the midst of a civil war in order to obtain some sacred artefact. Using steal, combat or a combination of the two, along with companion Laura Bailey, Chloe must take on a variety of enemies as well as puzzles and various other challenges in order to reach her goal.

As with previous Uncharted games, dialogue selection allows you to influence the progression of the story and the inter-character relationships therein. Though a standalone expansion to the series, no detail has been spared in creating a vivid, lush environment in which to explore and an absorbing story in which to play a part.

See what The Lost Legacy has to offer in this official gameplay video.

Learn of the twists and turns you’ll be embarking upon in Uncharted: The Lost Legacy.