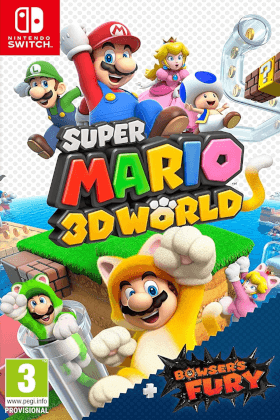 Find the best deals on Super Mario 3D World + Bowser’s Fury for Nintendo Switch. We compare 20 deals (starting from £42.85) across every edition offered by our partner retailers.

Nintendo is celebrating Super Mario’s 35th anniversary in style this year, packaging a trio of much-beloved entries into the 3D All Stars Collection and releasing an upscaled remaster of Super Mario 3D World. The latter is the same colourful platformer Wii U owners were treated to back in 2013, now repackaged and updated for the much larger Nintendo switch player base. There’s even a new, never-before-seen expansion titled Bowser’s Fury to dive into.

Super Mario 3D World + Bowser’s Fury is pure 3D platforming at its finest, setting Mario and friends off on what was their true HD adventure as they battle against the maniacal Bowser. The original Wii U version feature unique touchscreen controls and microphone elements that would allow players to reveal hidden items. All of these will successfully appear on Switch to still render Super Mario 3D World one of the best modern Mario games.

Another great Mario game on Switch, complete with new expansion

In addition to the main Super Mario 3D World levels, this Nintendo Switch version will also come pre-packaged with the new Bowser’s Fury expansion. This promises to be a far darker take on the universe, with the announcement trailer depicting a stormy and down-trodden version of the mushroom kingdom that Mario must overcome. Has Bowser gone too far this time?

The first appearance of Cat Mario

He might primarily be a plumber, but Mario has in fact donned a range of different super-powered suits over the years. Super Mario 3D World continued this tradition, marking the very first appearance of the cat suit, which allows the man himself to run faster, perform more effective attacks and scurry up walls in order to access hard-to-reach areas.

Super Mario 3D World differs from most other Nintendo 3D platformers in that it supports true four-player gameplay. However, whereas the Wii U version limited this to four people playing on the same screen, Nintendo Switch will allow you to do so online, too. Insanity is inevitable as soon as Mario, Luigi, Peach and Toad roll their way through levels together.