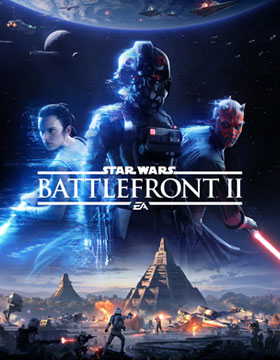 Find the best deals on Star Wars: Battlefront II for PlayStation Portable, PC (Microsoft Windows), PlayStation 2, Xbox. We compare 32 deals (starting from £7.33) across every edition offered by our partner retailers.

Star Wars games have never struggled to find an audience thanks to the film series’ massive and fanatical following, but even amongst such a hugely popular canon of games, Star Wars Battlefront 2 may well prove to be an outlier. With incredible graphics that truly bring the iconic landscapes and cities of the films to life, fast paced gameplay reminiscent of the gargantuan battle scenes and a vast array of familiar characters, Star Wars Battlefront 2 is a must-have for any fan of the series.

A single player story mode will give you an immersive gaming experience, as you follow the plot of the films and take part in some of the major set piece battles from the seven major entries into the film series. Customisable classes offer an RPG-esque aspect to proceedings, as you can choose to optimise your character as you see fit in order to play to your strengths and preferred combat style.

The online aspects of the Battlefront 2 will enable you to join in huge pitched battles on Naboo, Hoth and other landmark locations, all backed by one of the greatest film scores ever. You can even take charge of some of most celebrated Star Wars characters in order to give your team a heroic advantage, regardless of which era of films they belong to.

Get a feel for Battlefront II’s gameplay with the official trailer.