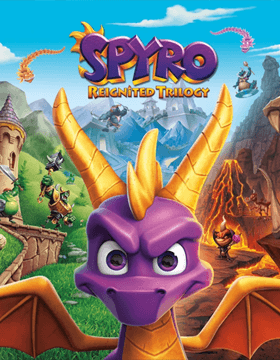 Find the best deals on Spyro Reignited Trilogy for PlayStation 4, Xbox One. We compare 52 deals (starting from £13.99) across every edition offered by our partner retailers.

Spyro belongs alongside a very select group of iconic gaming mascots that came to prominence during the 1990s. Sonic, Crash, Lara Croft are all part of this group, which hold a very unique and special place in the collective gaming psyche of the world.

Now, Spyro is finally back. After a long hiatus, the Spyro: Reignited Trilogy will allow one generation to relive their childhoods in completely remastered, glorious HD graphics, while introducing this classic character to a younger group of gamers.

As the name suggests, the Reignited Trilogy will take the lead from 2017’s Crash Bandicoot N. Sane Trilogy and remaster the first three games in the series: Spyro the Dragon, Spyro 2: Ripto’s Rage (originally called Gateway to Glitter in Europe) and Spyro: Year of the Dragon. Smash, fly and incinerate your way through levels, rescuing your dragon friends while taking on Gnasty Gnorc and a range of other villains.

Rather than a standard remaster, which would typically just involve upscaling resolutions, the Reignited Trilogy presents the Spyro games as you’ve never seen them before, with beautiful textures and updated character models befitting the current generation of consoles.

The Spyro Reignited Trilogy not only brings these three iconic games back to life with remastered graphics and textures, but it preserves what made them so popular in the first place. Stuart Copeland’s iconic score returns, as does Tom Kenny, who voiced Spyro in two of the original games.

The Spyro Reignited Trilogy will release on PS4 and Xbox One this September, followed by a Nintendo Switch release on an as-of-yet-unconfirmed date. Here, you’ll find all the lowest prices and best deals on Spyro!

See the trailer that got Spyro fans’ hearts racing!

Hear what the developers had to say about remaking three classic games.