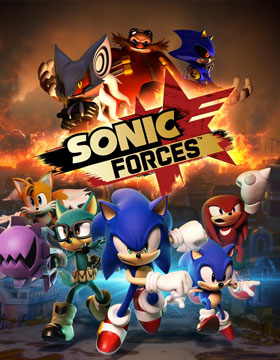 Find the best deals on Sonic Forces for PC (Microsoft Windows), PlayStation 4, Xbox One, Nintendo Switch. We compare 31 deals (starting from £15.95) across every edition offered by our partner retailers.

Sonic Forces’ story is a familiar one; Dr Eggman has created a new weapon, named Infinite, to take down Sonic, and it’s up to everyone’s favourite blue hedgehog to fight back and save the day. As the title suggests, Sonic is joined by a cavalcade of familiar friends including Knuckles and Tails. Certain stages dictate which character you can use, and some even allow you to form tag team partnerships to draw up the abilities and skills of each character.

Though Sonic Forces has been marketed as the year’s 3D Sonic game, in contrast to the retro 2D platforming action found in Sonic Mania, Forces presents a great variety in the gameplay that is certain to keep newcomers to the series and Sonic purists happy. The 3D sections of the game still embody the series’ iconic sense of blistering speed, with stages in the style of Crash Bandicoot. Many stages also feature side-on platforming sections that evoke the original games.

Featuring bright, colourful graphics, familiar characters and zones and, of course, breakneck speeds, Sonic Forces is a must for any Sonic fan.

Learn the plot of Sonic Forces.

See the sort of gameplay Sonic Forces has to offer.