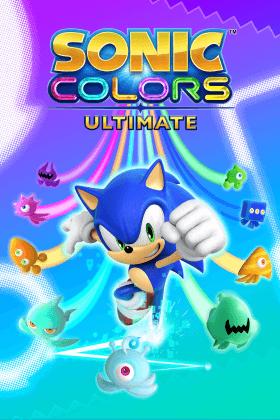 Find the best deals on Sonic Colours Ultimate for PlayStation 4, Xbox One, Nintendo Switch, PC (Microsoft Windows). We compare 22 deals (starting from £27.95 across every edition offered by our partner retailers.

Over a decade after the game first released as a Wii exclusive back in 2010, Sonic Colours returns later this year via a remastered edition set to launch on PlayStation 4, Xbox One and Nintendo Switch. This is the same fast-paced style of platformer SEGA devotees have come to expect from one of the blue blur’s most beloved outing, only now it boasts upgraded visuals, improved controls and all-new abilities introduced in other Sonic the Hedgehog games released since.

Sonic Colours: Ultimate focusses on Sonic’s latest attempt to thwart the evil Dr. Eggman, who has been busy building a glitzy amusement park that’s being powered by an ancient race of Wisps. This inspires Sonic and the gang to take down these attractions using lightning speed and whip-smart tactics, all as they must traverse six colourful worlds each with their different challenges and dangerous enemies. It’s still considered as one of Sonic’s best adventures yet!

This new Ultimate edition is being rolled out to commemorate Sonic’s 30th anniversary year. But there’s also another big reason to celebrate, as this marks the first time that players on PlayStation and Xbox will get to play Sonic Colours. Previously it remained trapped on a console unable to present high-definition graphics, yet that’s soon about to change when the game arrives on PS4, Xbox One and Nintendo Switch this September 7th.

The Nintendo Wii was a highly successful console, but not being able to output 1080p visuals meant players could only enjoy Sonic Colours in standard definition. Sonic Colours: Ultimate resolves that problem, however, enhancing gameplay using stunning upscaled visuals that take advantage of more recent console hardware. All the titular colours are now eye-popping!

Sonic Colours: Ultimate features all the bells and whistles featured in the original release, yet SEGA have gone all out to include something new in form of ‘Rival Rush’. It’s here where you’ll be able to go head on with Metal Sonic, attempting to outpace the metallic fiend to try and unlock in-game rewards and climb the leaderboards.

Read more >
Ratchet & Clank: Rift Apart bounces back, sells more in its second week at retail
Read more >
Every big game releasing on PlayStation, Xbox and Nintendo Switch in July 2021
Read more >
Nintendo slashes up to 75% off a range of eShop games in the ‘Digital Deals’ sale
Read more >
You’ll soon be able to play next-games on your Xbox One console via xCloud