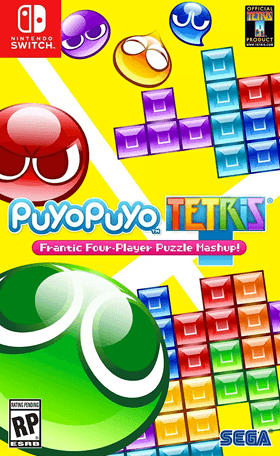 Find the best deals on Puyo Puyo Tetris for Xbox One, Nintendo Switch, PC (Microsoft Windows), PlayStation 4, Nintendo 3DS. We compare 15 deals (starting from £7.97) across every edition offered by our partner retailers.

Gaming, perhaps more than any other entertainment industry, is known for its franchises. Beloved casts of characters, locations and styles of gameplay have been developed and refined over the course of many games and years, in some cases even decades.

One genre, however, that hit its stride early on and has since often issued minor tweaks rather than wholesale reimaginings is puzzle games. Puyo Puyo Tetris combines two of the most enduring puzzle games of all time in one package. Both games operate with a slight twist on a similar formula. In Puyo Puyo, the player must connect falling coloured blobs together to try and eliminate them and create chain reactions, while in Tetris, the player progressed by competing full lines without a single break.

Watch the official trailer for Puyo Puyo Tetris on the Switch.