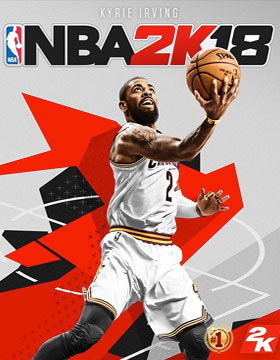 Find the best deals on NBA 2K18 for PC (Microsoft Windows), PlayStation 4, Xbox One, Nintendo Switch. We compare 13 deals (starting from £3.45) across every edition offered by our partner retailers.

NBA 2K18 takes everything that made the 2K17 version such a hit and expands upon it, offering perhaps the greatest basketball game ever committed to console. The presentation, from the in-game menus and broadcast-style cutscenes to the on-court action is top notch, as are the player and jersey likenesses, meaning this is as close to the real thing as you can get without watching a live game.

Care has been paid to make each player feel different to use, with accomplished dribblers differing from seasoned long-distance shooters. The computer AI reflects this too, with defenders intentionally marking players they know to be dangerous at the cost of leaving less skilled players available.

NBA 2K18 plays like a love-letter to the sport of basketball. The neighbourhood hub world is all encompassing, allowing you to choose game modes from training to careers right through to the NBA itself. You can even pit your encyclopedic knowledge of the sport against other fanatics in a trivia competition.

If you’re a basketball fan, NBA 2K18 deserves to be top of your shopping list.