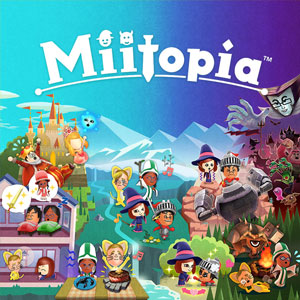 Find the best deals on Miitopia for Nintendo 3DS. We compare 27 deals (starting from £27.00 across every edition offered by our partner retailers.

One of the most creative Nintendo 3DS experiments makes its grand return on Nintendo Switch later this year. Giving players the opportunity to insert themselves (as well as friends and family) into their very own life-sim/RPG, Miitopia is a colourful and comedy-filled adventure that doesn’t really play like anything else. Who cares if Miis haven’t been a thing since the days of the 3DS and Wii? That won’t stop Switch players from getting in on the fun.

Miitopia weaves an inventive tale involving a menacing dark lord who is going around stealing people’s faces. Only by injecting yourself into this story and building relationships with your real-life friends in-game do you stand a chance of stopping him. This sets the stage for a different and hilarious turn-based RPG where you’re constantly getting stronger and looking after all the allies around you.

A hilariously quirky quest to save the world, mixing many genres together

Miis were first introduced as a way to represent yourself on both the 3DS and Wii platforms. It was long since thought that Nintendo had abandoned this concept, but it lives on in this remastered version of Miitopia. You’ll start this oddly zany adventure by recreating yourself as a Mii, slowly bringing in other characters that become more important as the story goes on. And when you’re not saving the world there’s always a café, beach and other locations to visit.

Miitopia may already be a known quantity by the time it comes to Switch in May, but Nintendo have sprinkled in a few new additions to make this version unique. Fresh customisation elements like makeup and wigs weren’t there in the 3DS version. The biggest change is that you can now have a horse as your companion, which will lend you a hand in battles if you care for it dearly.

Charming presentation that is fun for all the family

Of all the other first-party Nintendo franchises, Miitopia is definitely tapping into the vibes of, say, an Animal Crossing in terms of how approachable it is. Players of any age can enjoy the game due to how flexible it is by letting your create and introduce different people. It’s focus is on providing a personal experience where all of the family are guaranteed some fun.