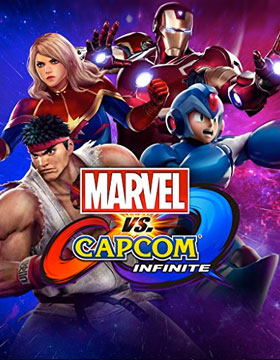 Find the best deals on Marvel vs. Capcom: Infinite for PlayStation 4, Xbox One, PC (Microsoft Windows). We compare 11 deals (starting from £12.95) across every edition offered by our partner retailers.

Creating a roster of fighters that combines iconic characters from the Marvel comic and Capcom gaming universes, Infinite offers fans of both franchises the opportunity to play as their heroes and fight it out. A story mode, complete with cinematic sequences, augments more traditional classic fight modes.

Infinite offers the ability to construct tag teams to fight with, with characters that be interchanged in the heat of battle to help combat your opponents team. It augments this team dynamic with ability boosting ‘infinity stones’, which add a whole new layer of tactics to the fights, as you work out which pairing to utilise and which strengths of your opponents you must nullify or weaknesses you must exploit.

A must for fans of either franchise – there are 30 characters to pick from in all – Marvel vs Capcom: Infinite offers a fresh, well-balanced take on the tried and tested quality of the fighting genre.

See what IGN thought of Marvel vs Capcom: Infinite.

Watch some gameplay footage of the game.