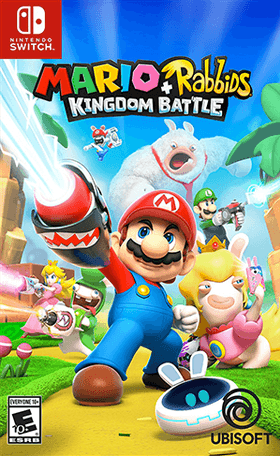 Find the best deals on Mario + Rabbids: Kingdom Battle for Nintendo Switch. We compare 21 deals (starting from £9.98) across every edition offered by our partner retailers.

From the combined creative minds of Nintendo and Ubisoft comes Mario + Rabbids, occupying a genre of game starring the portly plumper and Ubisoft’s crazed rabbit creations that neither have ventured into before. Unlike many Mario games, where the emphasis is on free-flowing action in both the 2D and 3D worlds, Mario + Rabbids is a turn-based strategy game that tasks you with putting together a team and strategically taking out some familiar enemies from the Mushroom Kingdom.

Set in a warped version of Mario’s home, the game will allow you to choose from not only familiar faces from the iconic Nintendo franchise, but as Rabbids masquerading as Mario, Luigi, Peach and others. Together, they must team up and face off against a cavalcade of Mushroom Kingdom villains, and outwit them in a series of moves.

What at first looks easy quickly becomes deceptively tricky, as you try to figure out how best to utilise your team’s strengths to solve the puzzle at hand.

Watch Nintendo play through the first world of the game.