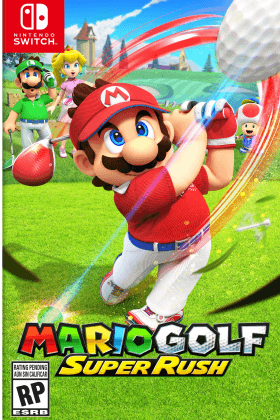 Find the best deals on Mario Golf: Super Rush for Nintendo Switch. We compare 26 deals (starting from £36.86 across every edition offered by our partner retailers.

The latest instalment of Mario Golf to come to Nintendo Switch is also the platform’s first, this time depicting Mario and friends on an all-new golfing adventure for the first time on a home console since Mario Golf: Toadstool Tour on the GameCube. It’s called Mario Golf: Super Rush, featuring a reimagined version of speed golf where players must travel from course to course in between shots.

Mario Golf: Super Rush allows teams of four to hit the green and play together in tournaments, either locally or online. What’s more, you’ll have the choose to play using accurate motion-controlled swings or with traditional face button controls. Both methods encourage you to become a master of teeing off. Rise through the golfing ranks either in a bid to be the best amongst friends or in Super Rush’s RPG-like story mode.

The Mario Golf series has always been especially fun compared to other sports games the moustachioued plumber has leant his likeness to, but Super Rush will be the first to take advanhtage of full HD graphics. This alone is enough to bring golfing fans closer to the arcade swinging action than ever before, either as your own customisable Mii or a familiar character from the mushroom kingdom.

If you’re a single-player fan wanting in on the arcade golfing fun, Super Rush has you covered by way of a dedicated story mode. It’s here where you’ll make your way through the Mushroom Kingdom’s most challenged coursing, trying to chip in as many hole-in-ones and birdies as possible. This you do as your dedicated Mii character bumping into familiar characters in the overworld.

Unleash special shots to rise to the top

Mario Golf: Super Rush challenges players to perfectly balance stats such as Power, Timing and Stamina in order to pull off the perfect swing. Putting with power is key to outpacing your friends in the game’s trademark Speed Golf mode, where everyone tees off at exactly the same time before having to chase after the ball from course to course.