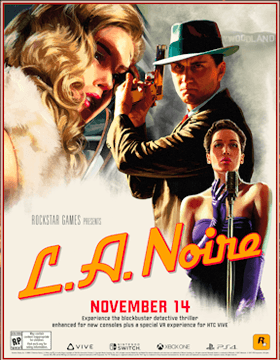 Find the best deals on L.A. Noire Remastered for Nintendo Switch, PS4, Xbox. We compare 7 deals (starting from £9.99) across every edition offered by our partner retailers.

With its highly authentic setting, meticulously detailed, case-driven storyline and its revolutionary motion captured cutscenes featuring notable actors, L.A. Noire set a standard for open world games in 2011 that few games have come to matching since. Now it’s back for the Xbox One (and One X), PS4 (and PS4 Pro) and Nintendo Switch. The X and Pro editions of the game will be released in stunning 4K resolutions that will give this outstanding period game the graphical justice it so clearly deserves. The Switch version will enable you to take your adventure on the go with you.

As a member of various L.A. police departments, including homicide and arson, you must work your way through several highly absorbing cases and further your career while gradually uncovering a wider case of conspiracy and corruption.

With accurate period details from the vehicles, clothing and dialogue to even the music on the radio, L.A. Noire presents an immersive experience that few games can claim to match, and it deserves to be experienced on the most modern gaming systems.

Watch the trailer for the Nintendo Switch version of the game.