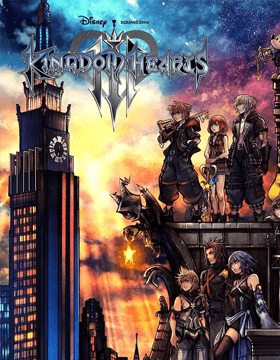 Find the best deals on Kingdom Hearts III for PS4, Xbox. We compare 41 deals (starting from £5.50) across every edition offered by our partner retailers.

The Heartless invasion is here. It’s up to you to save us all.

Through the power of friendship, Sora, Donald and Goofy must overcome tremendous challenge and defy the odds to save the universe.

Kingdom Hearts III follows Sora, a Keyblade wielder, through Disney and Pixar worlds straight from the movies to battle against evil. Join your closest allies Donald Duck and Goofy on an adventure of a lifetime to stop the Heartless from invading and overtaking the universe — one world at a time.

Sora is the unknowing heir to a spectacular power – the Kingdom Key – which draws out the true power of Sora’s Keyblade. In Kingdom Hearts 3, the mysterious Keyblades can transform into new forms to unlock new moves. Equip 3 Keyblades at any one time and switch between these on the fly to unleash devastating attacks and combos and defeat the Heartless hoards with style.

Explore and interact with each world in new ways and use the environment to your advantage. Get a combat power up and you can even summon Disney theme park rides (attractions) to attack your enemies with. The pirate ship from Pirates of the Caribbean and the mad tea cups (Mad Hatter) are two of the best power ups.

Kingdom Hearts III has the best graphics in the series to date with worlds and characters that wouldn’t look out of place on the big screen. Enjoy the beautiful, interactive worlds for everything they have to offer, and when you’ve spare time, play over 20 minigames inspired by Disney animated shorts. There’s always something to do.