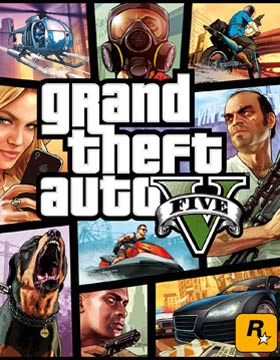 Find the best deals on Grand Theft Auto V for PC (Microsoft Windows), Xbox One, PlayStation 4. We compare 79 deals (starting from £8.61) across every edition offered by our partner retailers.

Having launched a simplistic, yet controversial, top-down game nearly two decades ago, few would have suspected that the Grand Theft Auto series would go on to become one of the most popular and played video game franchises in the world.

In Grand Theft Auto 5, the seventh main instalment in the series, game producer Rockstar have surpassed the notable achievements of former games by creating the biggest GTA yet. Played from the perspective of three protagonists rather than just one, GTA V is the most ambitious entry into the series to date, with more vehicles, more action and a vastly bigger open world in which to play.

You’ll take charge of Franklin, Michael and Trevor, as their stories intertwine and take them on a huge variety of missions, heists, stunts and more across the sprawling fictional state of San Andreas, which encompasses a built up metropolis of Los Santos, the forests to one side and the desert to the other.

Of course, while GTA V is bigger, the core mechanics of creating mayhem through vehicles and weaponry remain intact, with the potential to cause chaos greater than ever. GTA Online enables you to join friends in pulling off heists, racing and duking it out against other teams in death matches for supremacy in what has become one of the most popular online games of all time.

The official gameplay video showcases many of the activities you can get up to in GTA V!

Get a flavour for GTA Online with this adrenaline-pumping trailer!