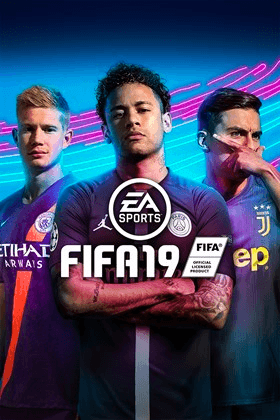 Find the best deals on FIFA 19 for PlayStation 4, Xbox One, Nintendo Switch, PC (Microsoft Windows). We compare 29 deals (starting from £9.95) across every edition offered by our partner retailers.

The upcoming release of FIFA 20 might be fast approaching, but the updated squads, kits and souped-up licensing agreement featured in FIFA 19 ensures that there’s still plenty of reasons to enjoy kick-off in last year’s release. FIFA 19 was where the Champions League, long requested by veteran players, finally appeared in the series, along with the Europa League and European Super Cup, adding an extra level of realism to the game’s career and story modes.

As well as a huge roster of leagues and teams, incredibly detailed graphics and player recreations and a vast number of game modes, FIFA 19 plays host to several new gameplay enhancements designed to make the best-selling football series the best it’s ever been. The Active Touch System is designed to deliver the most realistic player and ball control ever in a game. Timed finishing gives the player better control over the precise moment when they release a shot, a vital advantage when a split second can make the difference between success and failure. 50/50 battles have also been overhauled, with an algorithm calculating several factors and working out which player would most likely emerge victorious from a one-on-one duel.

Another returning feature, alongside the enormously popular online collectable mode FIFA Ultimate Team is the story/campaign mode, this time called The Journey: Champions, which is now in its third season. Play as Alex Hunter and pick up where you left off as you seek to become the world’s greatest player.

Up to 5 jumbo premium gold packs

Up to 20 jumbo premium gold packs

Up to 40 jumbo premium gold packs

FIFA 19 was released in September 2018 to acclaimed reviews, with many enjoying the various new enhancements made to EA’s best-selling football franchise. Alex Hunter’s rise to glory continues in the next step of FIFA’s story mode, for example, with The Journey: Champions charting his successes after being signed to Real Madrid. Will he replace cover star Christiano Ronaldo as star player of the world? It won’t be easy, but play hard enough and it’s possible.

Also new in FIFA 19 was what’s known as the “Active Touch System”, which aims to give players greater control over the ball by providing a level of absolute precision never before seen. This allows players to achieve a better degree of fluidity and personality, performing flicks and touches that are more representative of what it would be in context of the football player’s position on the pitch.

Pro Evolution Soccer’s loss is FIFA 19’s gain, as The UEFA Champions League, UEFA Europa League and UEFA Super Cup tournaments all make their way into EA’s game for the very first time after the licensing agreement with Konami’s rival football series is no longer active.