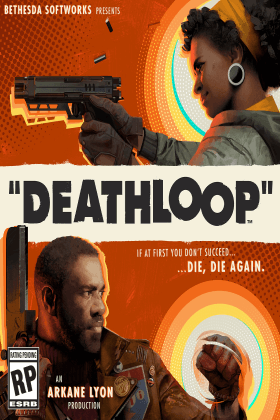 Find the best deals on Deathloop for PC (Microsoft Windows), PlayStation 5. We compare 61 deals (starting from £21.36 across every edition offered by our partner retailers.

Deathloop is a new physics-defying first-person shooter from the team behind the Dishonered series, once again letting you utilise unique powers to take down tricky and elusive targets. This time, however, the action all plays out across the same location over the same 24 hours repeatedly. Your character is trapped in a time loop, you see (hence the game’s title), which gives you the means to experiment with your kills.

You play as a relapsed assassin in Colt, who finds himself waking up on a beach located on the island of Blackreef. It’s here where the world’s richest and brightest minds gather to experience absolute bliss during a night that last forever. It’s now up to you to make use of this repeating loop, taking down all 8 targets as creatively as possible in order to escape.

Time-bending mechanics blend with tight gunplay in this PS5 exclusive

Deathloop is a killer PlayStation 5 shooter that truly showcases the power of next-gen. Blackreef, being an island made up for four distinct locations, is a prime example of this. Colt can visit these areas that will change depending on the time of day, shooting and teleporting through sun-kissed beaches, nightly restaurant parties and many more. This is the first true first-person shooter built for the ground up for PlayStation 5.

A repeating loop with one random factor

The idea behind Deathloop is that you’ll gain more knowledge about Blackreef and its inhabitants the more in-game days you play. One factor you won’t be expected and will need to accommodate for, however, is Julianna, another assassin trapped in the loop who will try to mess up your plan. She can be played by either a person or AI, so you’ll always be kept on your toes.

Deathloop looks and plays like a 21st century FPS, but the tone has heavily been inspired by 60s spy thrillers such as James Bond. Everything from the island itself to some of the optional character skins exude this classic sense of style, going some way to make you feel like you’ve been transported to a whole other alternate version of the 60s. Breaking the loop has never been more sophisticated.