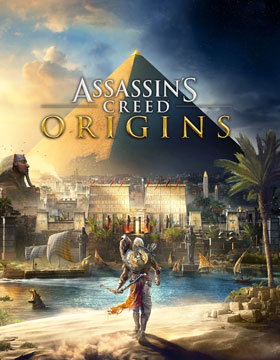 Find the best deals on Assassin's Creed: Origins for PC (Microsoft Windows), PlayStation 4, Xbox One. We compare 58 deals (starting from £4.98) across every edition offered by our partner retailers.

Assassin’s Creed has always delighted in letting players explore areas and time periods of historical significance in an exciting, action-packed way. With Origins, the series’ tenth installment, they’re taking players back to one of the most iconic historic periods of Egypt. So confident to the game’s designers feel about their choice of setting that they’ll even be including (in a future update) a ‘Discovery Tour’ mode, which offers a virtual history tour of the game’s locations.

While Origins may be set further back in time than many of its predecessors, its gameplay mechanics are the most modern of the series. Combat has been overhauled, with a more dynamic, adaptive animation system providing a more fluid and natural fighting style when compared to previous games in the series. An eagle companion enables aerial exploration and the ability to see the vast landscape. The open world nature of the game, a staple of the series, remains intact, with players requiring stealth as well as strength to work their way through the story.

Graphically, Assassin’s Creed games have always been at the forefront of their respective hardware platforms, and Origins is no exception. Dynamic lighting, realistic character modelling and an expansive world that has been carefully polished to show off the true capabilities of this generation’s hardware, including the Xbox One X, for which Origins is one of the system’s first specially ‘Enhanced’ titles.

Watch the cinematic trailer for Origins.