There are plenty of reasons to get excited about the upcoming release of WWE 2K20 on Xbox One and PlayStation 4. It’s the first entry developed by Visual Concepts, commemorates the 20th anniversary of WWE Smackdown!, but more importantly, it features the return of various legendary wrestlers and WWE hall-of-famers. Combine this with a completely revamped gameplay overhaul and enhanced visuals, then you really have the biggest and best WWE game yet!

Due for official release on 22nd October, we thought it worthwhile running through all the legendary wrestlers set to return in WWE 2K20. The game will feature an updated roster covering all the current superstars wrestling in RAW and Smackdown, sure, but these are the classic wrestling icons we can’t wait to get our hands on most.

Our noses could smell this legendary WWE superstar cooking from a mile away, and not only because he tends to reek of Hollywood success these days. Dwayne ‘The Rock’ Johnson has quickly become a fan-favourite character to unlock in the modern WWE 2K games, whether that’s via playing through the in-game career mode or completing specific exhibition requirements. He may have officially retired from full-time wrestling since 2004, but his intermittent appearances on Smackdown! And RAW in between movie roles keeps his legacy alive.

WWE 2K20 features an entirely new character model for The Rock, featuring multiple outfits that will let players play as him from both the attitude era as well as how he looks now in his many modern appearances. And of course, you can’t have the most electrifying man in all of sports entertainment return without his duo of signature moves: The People’s Elbow and The Rock Bottom. Both are sure to devastate any challengers that meet him in the ring when WWE 2K20 arrives.

One of the most prominent and revered female wrestlers to ever step into the WWE ring, Chyna unfortunately passed away recently in 2016 after her wrestling retirement many years before. This marks her first appearance in a game since 2000’s WWF SmackDown! 2: Know Your Role, marking the end of a 19-year hiatus. It’s all thanks to WWE 2K20 being an adamant celebration of 20 years of wrestling games, with Chyna’s appearance being but one of the many different cherries on top.

Affectionately known at the time as the 9th wonder of the world, Chyna has been lovingly brought to life for her long-awaited appearance in WWE 2K20. Popular signature moves like The Walls of China also return, ready to cause pain to any wrestling rival that she’d prefer to have tap out. For the very first time Chyna will be able to go toe-to-toe with current female wrestling icons like Sasha Banks and Becky Lynch, making her appearance here all the more memorable.

One of the most explosive personalities to ever step into the WWE ring, Hulk Hogan makes his highly anticipated return as a legendary unlockable character in WWE 2K20. He’s stayed absent from the in-game roster since WWE 2K15, but returns now to bring Hulkamania to back onto PlayStation 4 and Xbox One. Hi fiery character has been faithfully brought to life from his entrances to signature special moves, making him a force to be reckoned with when faced in the ring.

Hulk Hogan is without doubt one of the oldest legendary wrestlers to make an appearance in the game, but players can look forward to playing as him in his classic persona as well as something a little more modern. “The Real American” has used his larger-than-life personality and stark wrestling ability to win many WWE championships, which you can effectively recreate when unlocking him in game.

Master of the world’s strongest slam, Mark Henry has been a WWE mainstay since way back in the ‘90s, having wrestled alongside other epic attitude era superstars such as The Rock, Triple-H and The Undertaker. Henry was recently inducted into the WWE Hall of Fame for the class of 2018, now mentoring the younger talent of RAW and Smackdown! This makes his appearance in WWE 2K20 on Xbox One and PlayStation 4 all the more special.

It’s not been that long since he last appeared in a WWE game, having featured prominently last year in 2K19. However, Mark Henry’s appearance in WWE 2K20 will benefit greatly from developer Visual Concept’s fresh gameplay overhaul, rendering his aesthetic and signature moves to look more believable and effective.

Inducted in WWE’s Hall of Fame since 2014, Jake ‘The Snake’ Roberts is a wrestling legend that has gone up against such greats as Andre the Giant and Triple-H – spanning entire generations to put the python on them. He makes a return to the series via WWE 2K20, representing an era of wrestling than spans as far back as 1975. Jake Roberts earned the Snake moniker due to how untrustworthy he could be in the ring, and this has been fully realised in WWE 2K20.

Players will be able to take on the Jake ‘The Snake’ Roberts persona via various outfits that are each representative of a different decade. When you have a storied career as long and fruitful as this, then you wouldn’t expect anything less. His iconic finishing move, the DDT, was eventually named one of the coolest moves to ever appear in WWE – and you can affectionately recreate it many times over in WWE 2K20.

Mankind’s playful yet weirdly off-kilter look has made him a popular favourite that has had many special appearances in past WWE games. His iconic finishing move, Mandible Claw, sees him takoe a sock puppet and gag other wrestler’s using it, so what’s not to love about recreating it in WWE 2K20? Of course, as well as Mankind, legendary superstar Mick Foley has had other great personas like Cactus Jack and himself over the years. All these appear in full force in 2K20. 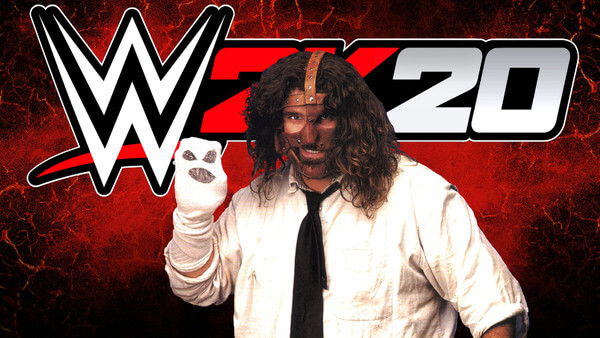 Unfortunately, Mankind will only be available as a DLC character at launch, meaning that you’ll have to purchase the Deluxe Edition of WWE 2K20 if you want to play as him on day one. Still, after unlocking him, you won’t regret it. The mandible claw and double arm DDT make for exciting signature moves that can be utilised in the ring at any time.

We’re sure we haven’t heard the last of the WWE wrestling legends set to appear in WWE 2K20. After all, 22nd October is still a few weeks away, so there’s every chance that 2K will opt to commemorate the 20th anniversary of Smackdown! more by giving players more character reveals. We’ll continue to update this blog should that be the case, so stay tuned…