Players still struggling to purchase a PlayStation 5 through the usual means may soon have better luck, as Sony recently revealed it would soon be selling hardware directly to European consumers. It’s expected to happen by the end of March 22nd, with Sony’s dedicated retail site – known as PlayStation Direct – set to roll out across territories like the UK, Ireland, Germany, Belgium and more.

PlayStation Direct already launched in the US during September of last year, acting as a way for Sony to effectively cut out the traditional retail middleman by selling consoles, games and accessories through its own site. News that the service will soon be expanding to Europe comes courtesy of a leaked slide from a presentation Sony gave to investors, where it laid out future plans to roll out new growth vectors. 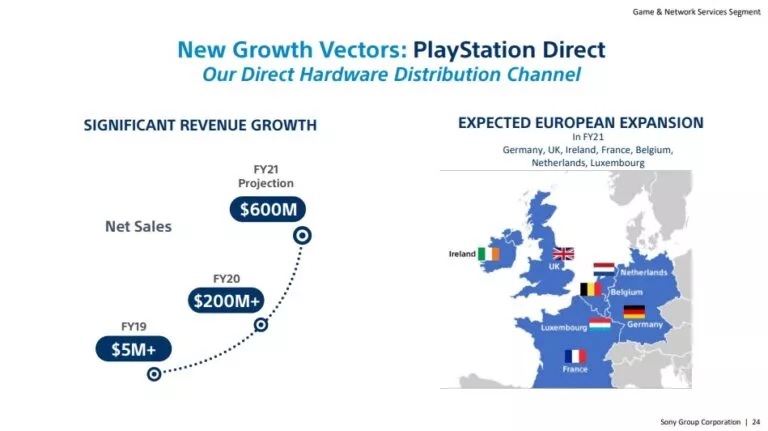 “PlayStation Direct has achieved significant revenue in the US market within little more than a year of starting operations,” SIE CEO Jim Ryan expressed to investors during the presentation. This, he said, would lead to “300 percent further growth within this fiscal year”. This puts PlayStation Direct’s rollout in a similar timescale to when Sony is hoping to have swapped semiconductor suppliers, another feat the company hopes will improve satiate demand for ongoing PS5 stock.

At present, PS5 drops are being snapped up here in the UK all too quickly, with average consumers still falling behind the speed of scalpers and bots. Hopefully as the launch of PlayStation Direct’s European arm grows nearer, PlayStation 5 stock will even out. If not, the service will have arrived just in time. Until that time, you can keep track of recent PS5 stock drops by checking our dedicated portal page that’s updated daily.