Aside from being an absolute mouthful to say, SpongeBob SquarePants: Battle for Bikini Bottom is also one of the unlikeliest candidates to get the remake treatment. Stuff like this simply doesn’t happen for licenced games typically, especially when said game is from an era when the practice was seen as cash-grabby. And yet it says a lot that, in a year when players are being given the chance to re-experience the horror of Resident Evil 3 and the wonder Final Fantasy VII’s Midgard with a new lick of paint, this classic PS2 platformer based on everyone’s favourite porous sponge is back and more vibrant than ever.

Dubbed the “Rehydrated” edition, this updated version of SpongeBob SquarePants: Battle for Bikini Bottom looks and plays just as you remember it, very much being a remake that goes the route of the faithful rather than revolutionary. The basic skeleton of this robot-invasion story set in the titular underwater city doesn’t shake things up too much, therefore, with mechanics, characters and locations all being familiar. Such slavishness to the 2003 original does wind up making Rehydrated feel outdated in certain aspects. Overall, however, minor drawbacks aren’t enough to make this return trip to SpongeBob’s colourful world any less charming or enjoyable.

One of the major boons for any game based on an existing TV show or film is the ability to experience locations you’re already familiar with in a totally different light. The original Battle for Bikini Bottom succeeded at this, letting you roam the likes of Jellyfish Fields and Downton Bikini Bottom from a new perspective, but Rehydrated takes up another notch thanks to new and improved assets and some modern lighting. The result is a 3D platformer set in the SpongeBob universe that really pops off the screen, serving as a visual jamboree of epic proportions that easily sees Battle for Bikini Bottom sit alongside the recent Crash Bandicoot and Spyro the Dragon remakes.

Compared to those titles, however, Rehydrated feels a lot more traditional by 3D platforming standards. This is because most of your time is spent exploring various regions of Bikini Bottom, hunting for collectables and taking down various bosses, all as you bash your way through endless hordes of maniacal mechanical robots unleashed by Plankton as part of his greatest scheme. It’s a good choice of narrative through line, as what’s here definitely feels much grander than what occurs in a traditional TV episode of SpongeBob SquarePants.

Adding to this variety are the handful of playable characters, which includes the net-wielding SpongeBob himself, his trusty companion Patrick and Texan squirrel Sandy Cheeks who can temporarily hover to reach high spaces and use her lasso to take down bots from afar. Knowing which character to use when is always easy thanks to the presence of a nearby bus stop. Simply hitch a ride to quickly switch one out for the other and do your best to gather every micro hub’s collectables. Even if some characters from the show aren’t voiced by their TV counterpart – we’re looking at you Mr Krabs – the actors behind these three main heroes do return and any sound-a-likes do a decent job. 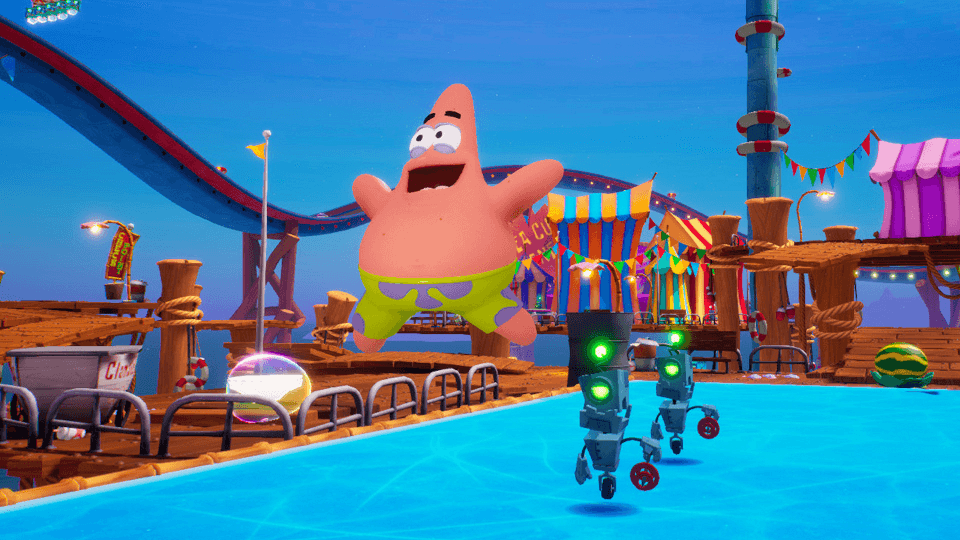 The robot invasion conceit helps ensure that you’re journey through a ravaged (and now more vibrant) Bikini Bottom is never dull, as new enemy variants are introduced each requiring a different approach to best be defeated. Plankton’s takeover plan even translates to Rehydrated’s boss battles, which might match the main game’s lack of challenge for the most part but delight on a visual level. Who doesn’t want to take down mechanical versions of Patrick, Squidward and more?

This leads us onto what new SpongeBob SquarePants: Battle for Bikini Bottom – Rehydrated brings to the 2020 table. Because while much of what’s here is simply overhauled from the original game largely, developer Purple Lamp Studios has been kind of enough to restore some of the 2003 version’s cut content – most prominently seen in additional boss fights. They mainly take on the form of arenas where you must duke it out with a screen-sized robot, but they’re worth seeking out as they tend to be some of the most inventive.

Also new for the Rehydrated version is a bonus horde-based multiplayer mode, which challenges you and a friend to take on waves of robots for as long as possible while attempting to stay afloat on a series of islands. It’s fairly rudimentary and by no means revolutionary, but a nice touch is the ability to play as characters outside of those you’ll control in the single-player mode, like Mr Krabs, Squidward and even Plankton. It would have been nice to see a co-operative portion that was more story-based, but this horde-style multiplayer does add value to the core Battle for Bikini Bottom experience and offers something to play after the 10-hour or so campaign. 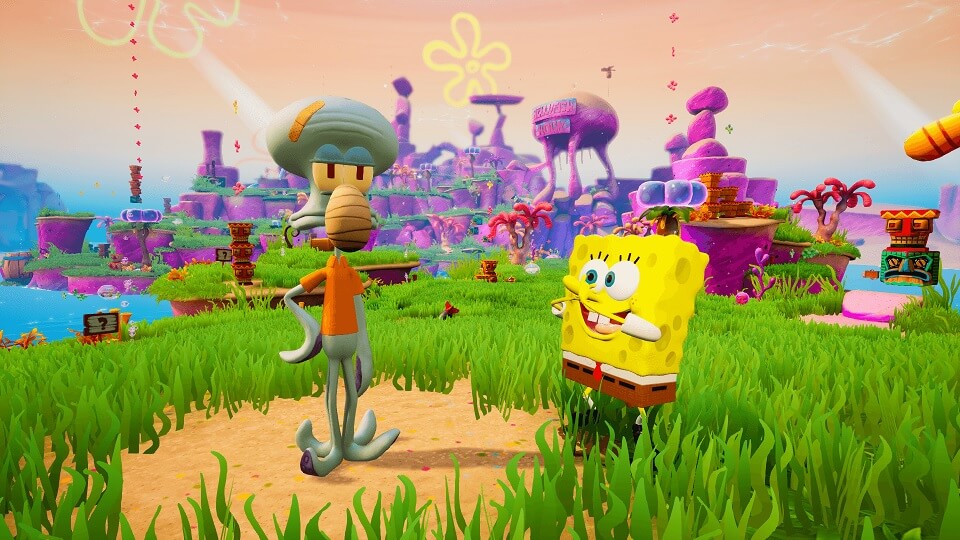 Unfortunately, SpongeBob SquarePants: Battle for Bikini Bottom – Rehydrated being such a faithful remake does lead it to bump into some frustrating issues every now and then. Some of the mini-games, for example, like one where you’re required to bungie jump down to bash tikis and grab collectables hasn’t aged too well. Unreliable mechanical instances like this thankfully don’t crop up too often but will irk those hoping to hunt down every one of Patrick’s socks and all 100 Golden Spatulas. Adding to this frustration is the poor signposting in a few sections and the constant repetition of certain sound bites spouted by the main characters. We get it SpongeBob you’re the ‘Sponge-inator’. Faults like these are when Battle for Bikini Bottom’s true era is reveal.

Even still, SpongeBob SquarePants: Battle for Bikini Bottom – Rehydrated largely succeeds in recapturing the magic of the 2003 cult classic, overhauling the original game’s soundtrack and visuals with enough flair to convincingly transport fans back to when SpongeBob SquarePants ruled the world. The new multiplayer portion might be fairly basic compared to some other offerings. But even that, alongside the kind restoration of cut content and core single-player adventure, all combine to make this the best way to experience SpongeBob’s premier tie-in game.

The best price for Battle for Bikini Bottom on PS4, Nintendo Switch and Xbox One