Those who play games on the eSports stage or generally crave a competitive edge will always want to pay attention to Razer. This is a brand that’s been leading the way in terms of premium-quality video game accessories for quite some time, so it should come as no surprise to learn that its latest audio effort packs in a boatload of advanced features while still prioritising comfort. The awkwardly titled Blackshark V2 Pro Wireless eSports headset may sit on the pricier end of the spectrum, but for the most part, your investment will be worth it.

We’ve been putting the Blackshark V2 Pro through its paces over the past few days, and came away really impressed with what it’s able to deliver. Turns out the expression “you get what you pay for” holds plenty of truth to it, as this is a high-end gaming headset solution primed to suit players dedicated to PC and all three of the big console platforms. Whether you’re primarily a multiplayer gamer or not, the Blackshark V2 Pro just about justifies its hefty purchase price.

As far as style goes, this is about as understated a design as a professional eSports headset can get. Rather than opt for garish colours inside the ear cups or displaying its logo vigorously on the head band as is often the case with some third-party brands, Razer have ensured that, when worn, the Blackshark V2 Pro should largely go unnoticed – as strange as that sounds. Every outward facing surface is coated in a soft-touch matte black texture that really contributes to an overall slick look, only ever hinting at the manufacturer’s name or logo whenever you turn your head and light hits it at a certain angle. 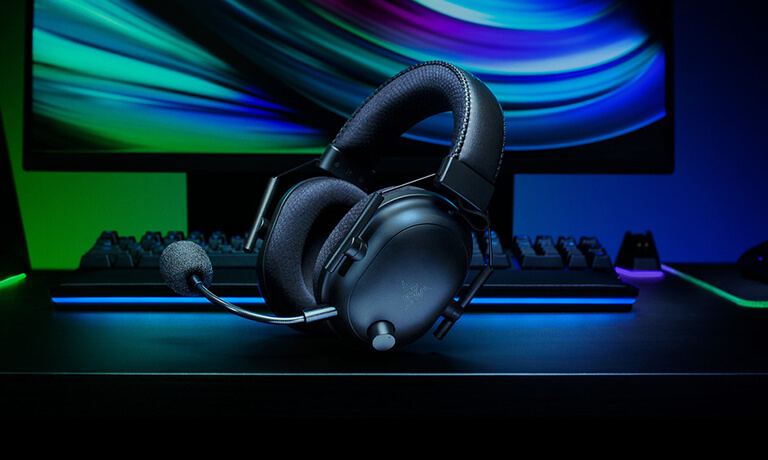 The Blackshark V2 Pro headset being so minimalist leaves us at a bit of a loss in terms of what to say about it’s general aesthetic. But just trust us when we say that it’s a smart-looking design that looks modern, and doesn’t look overly bulky. We know this because, in comparison to other headsets we’ve tested like the PDP Lvl50 or the Gioteck TX-50, Razer’s latest product forgoes connecting the ear cup and head band using more plastic material, instead opting for a pared-back braided cable. That might sound worrying, but in our experience, it’s remained sturdy whenever we wanted to adjust the fit to suit our heads better.

Style is even uncluttered as soon as you attach the HyperClear Supercardiod microphone, although the removable pop filter on the end can make you look like an American sports announcer on ESPN. The Blackshark V2 Pro headset doesn’t set the world on fire in terms of the aesthetic, if we’re honest, but then it doesn’t really need to. The dark black colouring coupled with the unobtrusive ear cup size gives it an overall appearance that should appeal to most types of player.

Functionality is extremely straightforward with Blackshark V2 Pro, as razer have seemingly covered every possible option. As stated in the intro, this is a headset that isn’t locked off by platform, instead suiting every player’s personal preference by being readily compatible with PS4, PS5, Xbox One, Xbox Series, Nintendo Switch and PC. Getting it to work on any of these is also a clean process, working wirelessly via the USB transceiver that’s included or simply plugging it into the 3.5mm jack. The Nintendo Switch obviously doesn’t feature a USB port when played in handheld mode, so in those circumstances a wired connection is your only option. 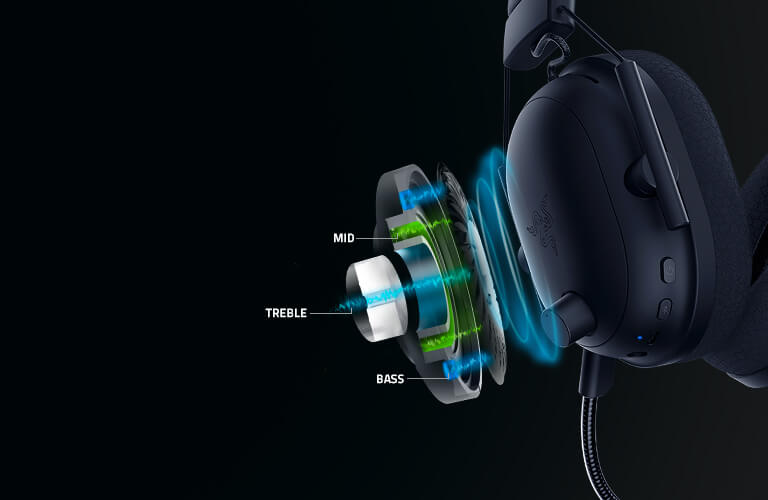 This is where the Blackshark V2 Pro headset ticks all of the boxes. When picking it up your getting a premium quality audio experience, largely thanks to the 50mm titanium drivers capable of delivering 7.1 surround sound, advanced noise cancellation that keeps you better immersed in the game, and a 2.4 GHz wireless connection that is almost latency-free. Granted, on that last point, it’s extremely rare that we can detect a noticeable lag on any decent modern headset. However, our connection to the game’s audio over a wireless connection was never once interrupted.

We tested the Blackshark V2 Pro headset across three games during our time with it, all differing wildly in terms of the audio experience they provide. The first was Subnautica. Here the sound of the ocean and undersea wildlife plays an important role, and using the Razer headset we never failed to stay immersed within this deep blue adventure. Low-bass sound effects like bubbles are creature roars sounded appropriately bassy, and we could always tell in what direction they were coming from.

In terms of high-end audio frequencies, Resident Evil: Village is an action-packed horror game stacked with explosions, vampire screeches and lots of punchy gunfire. All of these came through extremely clearly when testing out the Blackshark V2 Pro. Then finally, Outriders offered us the chance to enjoy similar audio effects while staying in a party with a few friends in our ear. And while there’s no option to delineate between in-game noises and party chat on the headset itself, after adjusting these levels in the PlayStation 5 settings we were able to hear both sides distinctly.

The 50mm titanium drivers are full taken advantage of here, more so than other wireless headsets we’ve tested packing the same size. Combine this with the ultra-soft ear cushions providing ample noise cancellation, it wasn’t a struggle to keep full focus in any of the three games we used them for. If the onscreen action ever did become too loud or overbearing, the knob located on the left-side ear cup offers a great range of volume options.

We can’t overemphasize just how comfortable we found the Blackshark V2 Pro overall. Whereas most wireless headsets in our experience take a good 10 or 15 minutes to settle neatly on the head, here the memory foam cushions get to work almost immediately. There might be some adjustment needed in the headband to get it a perfect size, sure, but once sorted the comfort set in instantly – and continued to stay over long periods of time. 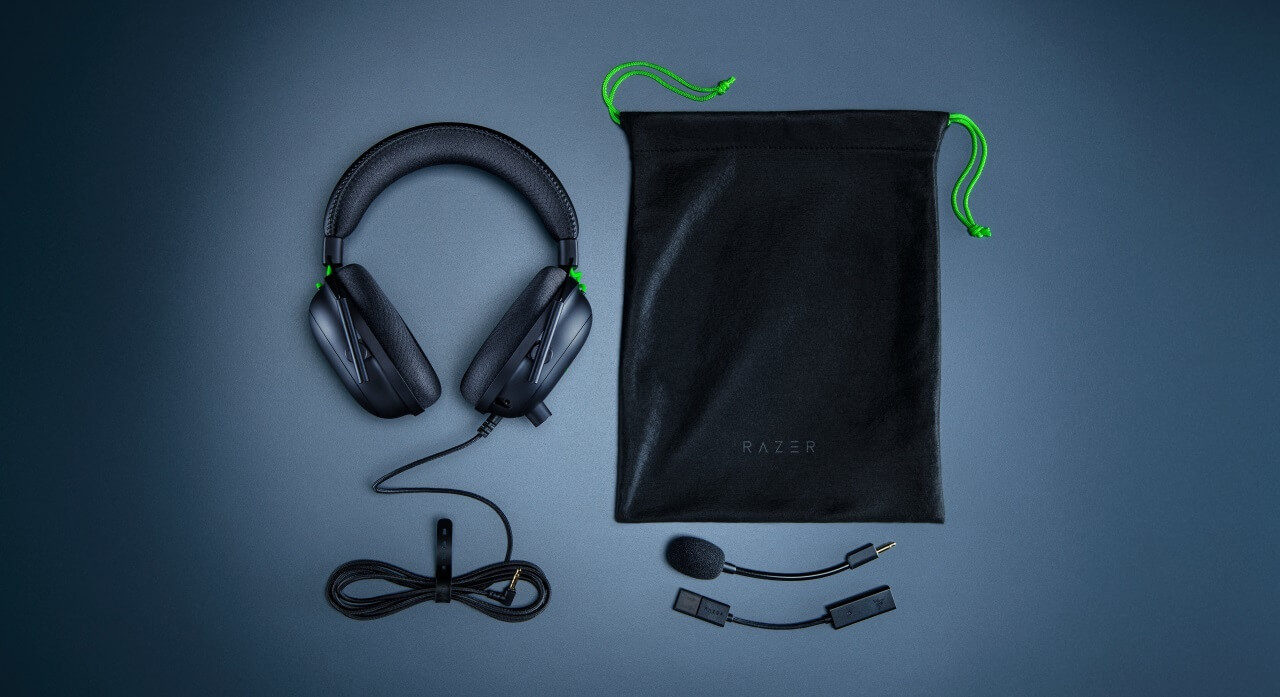 It helps that both the ear cups and headband are all cushioned within an inch of their life, but it’s been clearly worth it on Razer’s part because it has such a nice effect. Slightly more obtrusive is the detachable microphone. Simply put, the pop filter on the end was always noticeable in the periphery of our vision, which served to distract a little whenever we settled into a new gaming session. Obviously, it’s not the end of the world because it’s detachable, but a better solution may have been to include a flip-up to mute function. Some lower-end third-party headsets already offer this. As it stands, here you have a button to mute and having to constantly remove the mic could be cumbersome for a select few.

Price is where the Blackshark V2 Pro Wireless eSports headset enters love it or hate it territory. Its typical RRP here in the UK stands at £179.99, which definitely places it at the premium end of the market. However, we think it justifies this price point because of how much it excels at both comfort and performance. This is the best quality audio we’ve heard from a headset that isn’t made by a platform-holder. If you’ve already invested in PS5’s Pulse 3D headset, say, it may not be worth the switch. For everyone else, though, (including eSports players needing guaranteed immersive audio) the Blackshark V2 Pro Wireless eSports headset enters is a worthwhile pick-up.

Especially considering its wireless, the Blackshark V2 Pro Wireless eSports headset is another top-quality product from the folks over at Razer. The high price point may put off average consumers happy with simple sound, but eSports and die-hard gamers who want to hear every aspect of in-game audio won’t be disappointed.