You don’t have to look far these days to find a decent Xbox Series S|X controller. You’d think, therefore, that deciding which one to buy would be easy, but the truth is that most can lack the visual pizzazz desired by a small subset of gamers. That’s where the PowerA Spectra Infinity Enhanced Xbox controller comes in, acting as a relatively cheap but still satisfying-to-use gamepad solution that should suit all your gameplay needs.

Though it released more than a couple months ago now, we finally found time to put the Spectra Infinity through its paces. Does it feel great to use in games like Dirt 5, The Ascent and Gears 5? Of course! But where it impresses most is how it equally balances style and substance, offering a handful of pro features while looking great, too. Here’s the specifics…

Arguably the Spectra Infinity’s most defining aspect, PowerA here has created a controller that oozes both elegance and style. Layered around the D-Pad, analogue sticks, face buttons and the forward-facing faceplate are a series of LED lights, which when turned on hum an attractive-looking subtle glow that never feels garish. You have two options to this light functionality: Breathing and Solid. The latter works well to not distract you from gameplay by sticking to one colour, while more adventurous players have the opportunity to let a gamut of different shades slowly cycle through. 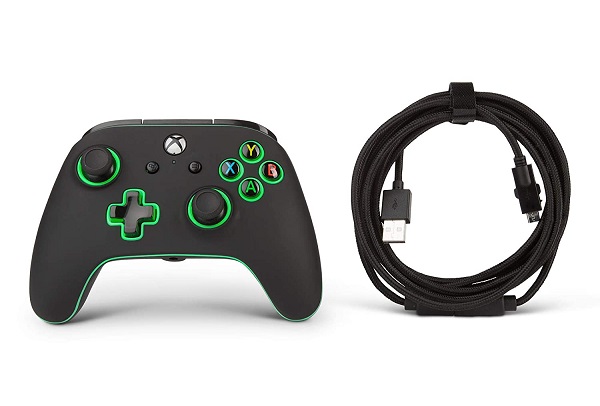 Aside from this chief stylistic feature, the Spectra Infinity controller touts a sense of luxury despite being fairly priced. A lot of this is down to the soft-touch matte black found on both the handles and faceplate, which don’t leave fingerprints and instead feel comfortable to touch. It might boast a rather muted design with the lights switched off, but overall the Spectra Infinity offers two distinct options – in terms of style – that should suit most Xbox players.

In terms of functionality, the Spectra Infinity Enhanced controller works just about as well as you’d expect. It’s primarily marketed towards players with an Xbox Series S or Xbox Series X, but it’ll just as easily connect and work with the Xbox One family of consoles. A lot of this is down to Microsoft excellently ensuring synchronicity across all its systems. However, it’s still nice that PowerA has been careful to take advantage here.

The gamepad itself might not be the most eSports-centric, yet there are a few “pro” bells and whistles here you won’t find in Microsoft’s own first-party effort. There are two programmable back buttons that can be assigned to any other input’s basic function, and then first-person shooter fans can rest easy knowing that three-way trigger locks are also present. Does it feature the vast amount of customisation seen in something like the Elite Series 2? No, but what’s here is appreciated. The dual rumble in particular delivers a great sensation in driving games. Ultimately, we’d say the Spectra Infinity is slightly ‘enhanced’ with regards to functionality.

The Spectra Infinity’s form factor is near indistinguishable from the regular Xbox Series S|X gamepad. However, as mentioned earlier the soft-touch matte texture does well to make your fingertips feel welcome, but in addition to this it’s worth noting just how great it feels to hold. Because while there are a few bonus features present, aspects like the trigger locks and back buttons don’t overwhelm the controller. There’s a lot of heft to thig gamepad but it’s the good kind. 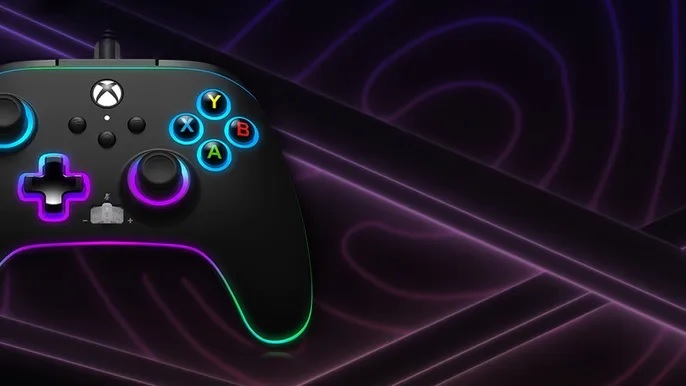 The one factor that might be a bit more cumbersome for some players is the fact that the Spectra Infinity is exclusively wired. Provided with a 10ft USB to Micro-USB cable, this size is long enough that it doesn’t become an issue most of the time, but it can cause your living room to look a little untidy, depending on how far away you play from your TV. Would it be nice if the controller came with rubberized grips, as per its FUSION Pro counterpart? True, but overall the Spectra Infinity is a breeze to use for multiple hours at a time.

The Spectra Infinity Enhanced controller is an extremely affordable gamepad option. Whereas the official Xbox Series S|X option retails for around £49.99, here you have a reliable alternative priced at almost £15 less. Sure, you don’t get the wireless functionality and will have to keep PowerA’s device connected at all times, but that’s a small price to pay for such a saving. Couple this with added bonus features like the LED lighting, trigger locks and back buttons, then you have an Xbox controller that is excellent value for money.

The PowerA Spectra Infinity Enhanced Xbox controller quite literally succeeds in lighting up your gaming space. If you're seeking a cheaper third-party gamepad that is still reliable and performs well, this latest additon from PowerA is an excellent option.

Get the best price on the Spectra Infinity Xbox controller below: 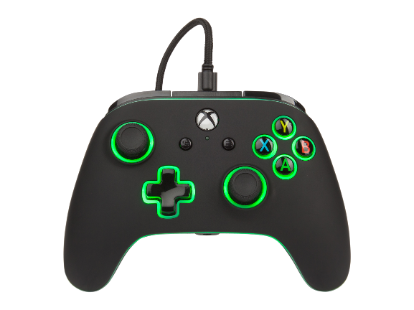