You might be able to dock it to play on your big screen TV, but it’s no secret that much of the joy that comes from playing Nintendo Switch is the ability to take it anywhere. One unfortunate side effect of this, though, is that you’ll often be forced to use the fiddly Joy-Con controllers when playing outside of your home. They obviously do the job and work well enough, yet it isn’t lost on accessories manufacturer PowerA that there must be a better solution.

Enter the Nano Enhanced Wireless controller for Nintendo Switch, a compact alternative to Nintendo’s own ‘Pro’ controller that comes with a suite of bonuses and quality of life improvements. It initially released towards the middle of last year as a portable-friendly Switch gamepad. Nobody was travelling anywhere fast then, so only now does the Nano Enhanced Wireless controller have a chance to truly shine. Is it a worthwhile pick up? We’ve put it through the paces to find out.

The Nano Enhanced Wireless controller is available in two main colours SKUs: Black and Grey/Neon. PowerA sent us the former for the purposes of this review, and we’d be lying if we said it wasn’t stylish. The matte black finish looks incredibly sleek, with the odd grey button and D-pad staying true to the overall pared-back design. This is a controller that won’t look out of placed when stored alongside others in your entertainment setup. This might disappoint some Switch fans who are used to more vibrant designs, but it works for the more mature player and there’s always the alternative Grey/Neon version available. 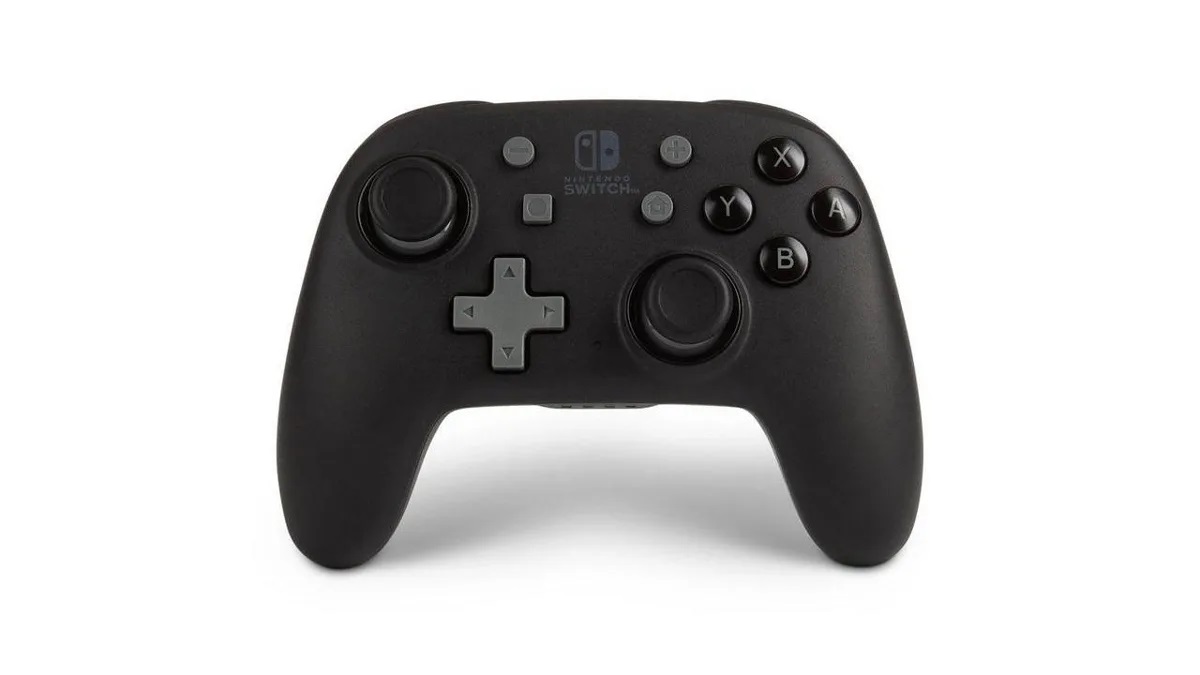 Being a product that’s been officially approved and licensed by Nintendo, the Nano Enhanced Wireless Controller does feel high quality despite its price point (more on that later). It likely won’t blow you away from a stylistic perspective as its focus is very much on function and form, but it is overall a fairly well-designed product. Plus, I can comfortably say that the little added functionality it does tout over the official Nintendo Switch pro controller never compromises on how it looks.

In terms of pure function the PowerA Nano Enhanced Wireless controller works about as well as expected. Pairing it up with your Nintendo Switch is as simple as entering the controller system menu, pressing the synch button (located at the top) and clicking the ‘change grip/order’ option. From here the Nano controller will be instantly found, to the extent that the look of the controller is actually recognised and faithfully depicted by the console. That was an unexpectedly great touch!

All of the buttons offer great feedback when clicked, and despite the controller being wireless I never once noticed any latency. It obviously features to programmable back buttons located at the back, which by now is pretty much expected from third-party controllers these days. However, here they’re easily accessible, ideal for competitive players who enjoy playing Fortnite, Paladins and now even Apex Legends on their Nintendo Switch.

Performance for the most part is solid, with the Nano Enhanced Wireless controller boasting an appreciated 20 hours of playtime on a single charge. For as good as this is, however, it’s half the amount of battery life offered by the official Nintendo Switch Pro controller. Yet when you consider that the main intention behind the Nano controller is to be taken with you on the go (hence the compact design), it should be an okay trade-off for most players.

The one area where the Nano controller’s performance does fall down a bit is with regards to the D-pad. It’s simply not as great-feeling as other third-party Switch controllers that I’ve tried. Thankfully, this shouldn’t matter too much in modern games where the analogue sticks are your primary method of control, but does mean that 2D platformers, indie metroidvanias and the like will suffer. All that being said, the Nano’s slightly sub-par D-pad is still a much better option than the left Joy-Con controller’s split-pad. It’s a small concession that is made up for with responsive triggers and the programmable back buttons.

The comfort aspect is where things get really interesting with the Nano Enhanced Wireless controller. This is mainly because I would say that its main selling point is that this is a controller that’s generally 25% smaller than a traditional gamepad. Your level of comfort, therefore, will be dependant on the size of your hands. I just so happen to have quite big hands, yet still I’ve never really struggled to play a game comfortably on Switch, PlayStation on Xbox.

I’ll admit it took a while until the Nano Enhanced Wireless controller felt natural to use. But eventually I was able to play without my thumbs knocking into each other and settled into reaching a bit further inward to tap the L and R triggers. I wouldn’t say the noticeably smaller size is ideal for long-term play sessions, but for portably on-the-go play I’d prefer to use it over the Joy-Con. Outside of the size, there aren’t too many comfort factors to speak of. Rubberized grips are nowhere to be seen, but the matte black finish does feel nice to the touch.

The PowerA Nano Enhanced Wireless controller is an exceptionally good deal. Priced at just £29.99 RRP here in the UK, it’s almost £40 cheaper than Nintendo’s first-party option, which places it firmly in the bracket of appealing to all types of gamer. True, the D-pad isn’t the best and the gamepad’s small size might not suit everyone, but it’s overall a high-quality product that is well worth the price of admission.

Not to mention how rare it is to find a premium-feeling gamepad under £30 that offers reliable wireless support. Plus, for the money you also get a drawstring pouch to go with it, helping you keep it safe wherever you take it with you. The Nano Enhanced Wireless controller might not be the absolute cheapest Nintendo Switch controller option, but it’s a sleek and dependable choice that has just enough additional features to warrant its mid-level price tag.

PowerA have generally done an excellent job in offering an alternative on-the-go gamepad solution for Nintendo Switch that should appeal to most players. It delivers a much comfier experience than the traditional Joy-Con thanks to the addition of a D-pad and satisfying button feedback, being easy to take with you thanks to its slightly smaller size. Sure, the Nano might not be able to exactly match the feel or quality of Nintendo’s first-party ‘Pro’ solution, but it’s a good and affordable compromise at just £29.99.

Get the best price for the PowerA Nano Enhanced Wireless controller