Though many consider the DualShock 4 to be an ample and ergonomic controller perfectly suited for PlayStation 4, there are a subset of competitive players always looking for a better gamepad to help improve their edge. This has led many third-party manufacturers to enter the fold, attempting to entice this hardcore crowd of gaming fans seeking a more premium gamepad solution to suit the professional player.

The new FUSION Pro Wireless PS4 controller represents PowerA’s latest go at this, serving as a fully customisable gamepad intended to appeal to people who play games like Overwatch, Call of Duty and Fortnite competitively. And while it might seem strange for PowerA to have poured its efforts into developing a high-quality controller for PS4 so soon after the PlayStation 5’s launch, the latter’s stock issues still ensures that there’s a market for this type of product. Better yet, the FUSION Pro Wireless PS4 controller is a solid product, providing you can stomach the accompanying price tag.

If PowerA were aiming for an extremely slick look and feel to this controller, they absolutely succeeded. Sliding out of the outer packaging you’re greeted by an attractive matte black hard-shell case, which, when opened reveals the hefty yet light gamepad in all its glory. This is the kind of presentation we’ve come to expect from third-party accessories priced higher than the £100 bracket, so it’s nice to see that PowerA are looking to wow and do so immediately.

In terms of the actual controller itself, the main faceplate again is coated in a layer of smooth black plastic. It easily lifts up to let you further customise your thumbsticks as desired, but the faceplate looks so natural and pared-backed you’d initially never know this was a feature. The FUSION Pro Wireless PS4 controller rightfully matches the Dualshock 4’s parallel analogue sticks, sure to fit snuggly in the hands of anyone who has been using the standard PS4 controller up until now. 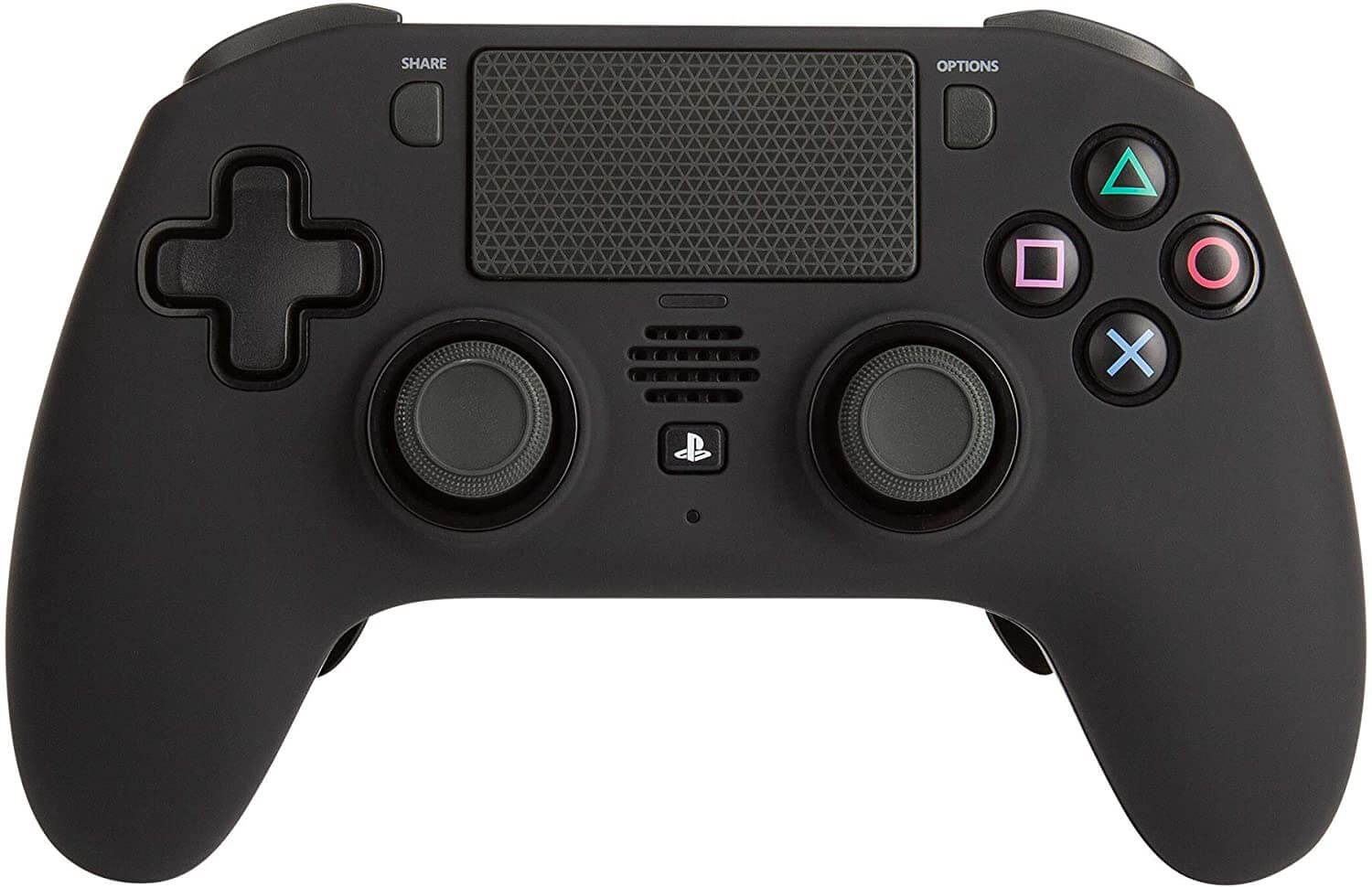 Overall, when it come to the FUSION Pro Wireless PS4 controller’s style, I’d say it opts for a look that is appealing yet understated. Unlike some other third-party gamepad options on the market there’s luckily no RGB light trimmings in sight. Instead, PowerA have gone a less flamboyant route that should please most types of competitive player. The shape itself is definitely bulkier than the Dualshock 4, but it still feels light to hold in the hands and all the buttons are easily accessible. This is a great-looking PS4 controller.

So a lot of gamers might be thinking what the FUSION Pro Wireless PS4 controller does differently from the Dualshock 4 – and the answer is a whole lot. Throughout the years console players have become accustomed to the fact that aiming in shooters won’t be as precise on a mouse-and-keyboard setup on PC, but there are a few gamepad additions that can help provide a leg-up. We even saw Sony recognise this not too long ago with the Dualshock 4 back button attachment.

The FUSION Pro Wireless PS4 controller absolutely features this back button functionality, but goes one better by including a total of four back paddles instead of the typical two. In theory this sounds like it could be a potential nightmare for players trying to make snap decisions in the heat of a round of Death Match, though in practice PowerA have made it pretty easy to navigate between the two left paddles and the two right paddles. Of course, players who find that paddles simply get in the way of their online strategies can always remove the detachable paddle pack entirely; PowerA has kindly provided a paddle-free pack attachment, too.

Other bells and whistles include the swappable thumbstick options, which allow you to change the height and surface texture depending on your preferences. I know that there’s a lot of thinking behind using a taller stick on the right-side as it can increase camera sensitivity, but I always returned back to the standard even setup. Also tying into this are the accompanying thumbstick rings, which when replaced allow you to decrease the level of friction – there are two options to choose from.

The added ‘Pro’ feature I found myself using most was the controller’s three-way hair trigger locks, both of which are easily adjusted with just a click of a button at either side on the back. Changing the distance it takes to squeeze your trigger is a shooter technique I can get behind, and doing so worked well when I tested out doing so in Call of Duty: Modern Warfare. Tue, the FUSION Pro Wireless PS4 controller may not be compatible with PS5, but altering the hair trigger locks so that their different either side is a good way to mimic the trigger resistance present in the Dualsense. 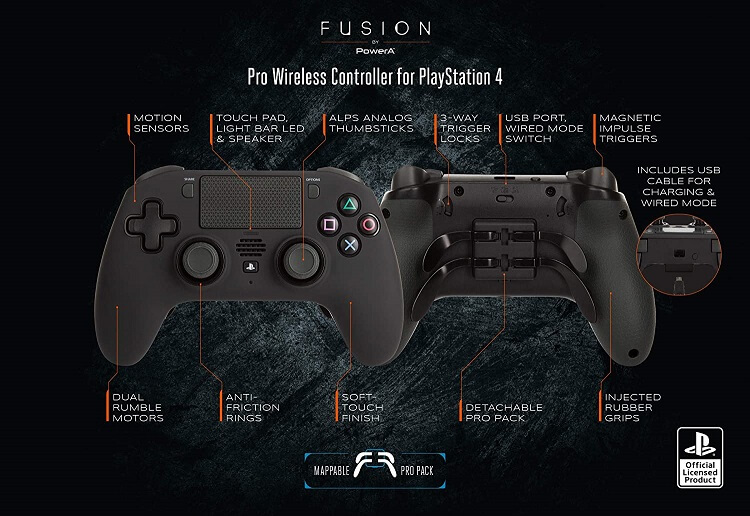 The FUSION Pro Wireless PS4 controller is intended for use on PlayStation 4 and PC, both of which it works perfectly fine with when connected via USB. Sadly, this being a PS4-era controller does mean that what we’ve got here is a braided USB to Micro-USB cable rather than the now standardised USB-C, but my button inputs were always responsive when playing in wired mode and I found the controller to reach full charge quite rapidly.

Getting the FUSION Pro Wireless PS4 controller to work wireless on your PlayStation 4 is as simple as holding down the gamepad’s PS button and Share button simultaneously for three seconds. Then all you have to do is select it from the console’s Bluetooth device menu and you’re on your way. In general, it performs just about as well as you’d expect from a high-priced controller such as this, which is to say very well. No complaints in this department.

As mentioned earlier, the FUSION Pro Wireless PS4 controller might be a tad bulkier than the Dualshock 4 but it doesn’t feel very heavy to hold in the hands. Usually, with third-party controllers like this, there can be a tendency for all the additional features to weigh them down quite a lot, causing your hands to get tired after using the controller for an extended period of time. The FUSION Pro Wireless PS4 controller, though, manages to strike the perfect balance. Ultimately this is a premium solution, so you want it to feel weightier but never too much. That’s what we have here.

Another comfort factor to mention is the injected rubberised grips that coat the controller’s underside. This ensures that players with sweaty hands always have nothing to fear, with their not really being a chance for the gamepad to slide out during the heat of play. Then, I’ve brought it up already, but the controller faceplate looks and feels great whenever your fingers brush over it, thanks to the matte black soft-touch finish. The only major downside to the controller’s comfort is that the central touchpad feels a bit rickety. Though even then, it’s mainly used in shooters to provide access to the map.

According to PowerA’s official website, the FUSION Pro has a standard price in the USA of $129.99. This will quickly place it out of the reach of the casual player or those who largely concern themselves with single-player, story-driven video games. For PVP-preferring players who play on console, though, it’s an extremely fair price considering just how customisable and great to use the FUSION Pro controller is overall. Doubly so if you consider that certain UK retailers currently have it listed for under £90 if you know where to look.

These days the standard Dualshock 4 controller sells for anywhere between £35 and £40, so it’s up to you to judge whether the £50 price hike is worth the ability to adjust trigger distance, benefit from anti-friction thumbstick control and the ability to map four back-paddle controls to any button. For this price, this is definitely one of the best value propositions when it comes to third-party premium controllers. Just bear in mind that it isn’t intended for PlayStation 5 – will you get enough use out of it before you make the jump to next-gen?

PowerA largely succeeds in letting professional gamers “play their way” with the release of its FUSION Pro Wireless PS4 controller. The central touchpad might not feel great to use and those already on PS5 may wish to stick with their Dualsense for games that support haptic feedback, yet this is a truly premium choice of gamepad that provides plenty of customisation options without sacrificing comfort or function.

Get the best current price on the Fusion Pro Wireless PS4 controller: 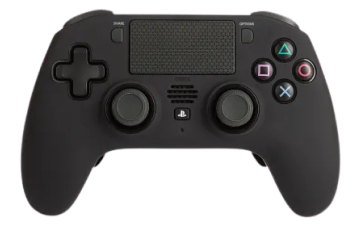