It’s an undisputed fact that if you’re someone who prefers playing their Nintendo Switch games on the big screen, you cannot go wrong with the official Nintendo Switch Pro controller. It’s well-made, comfortable to hold and sees you well through long stretches of play. However, if you’re a Switch enthusiast craving a little more style or don’t fancy spending close to £60 on a gamepad, PDP is aiming to entice you with its new Afterglow Deluxe+ Audio Wired Controller. 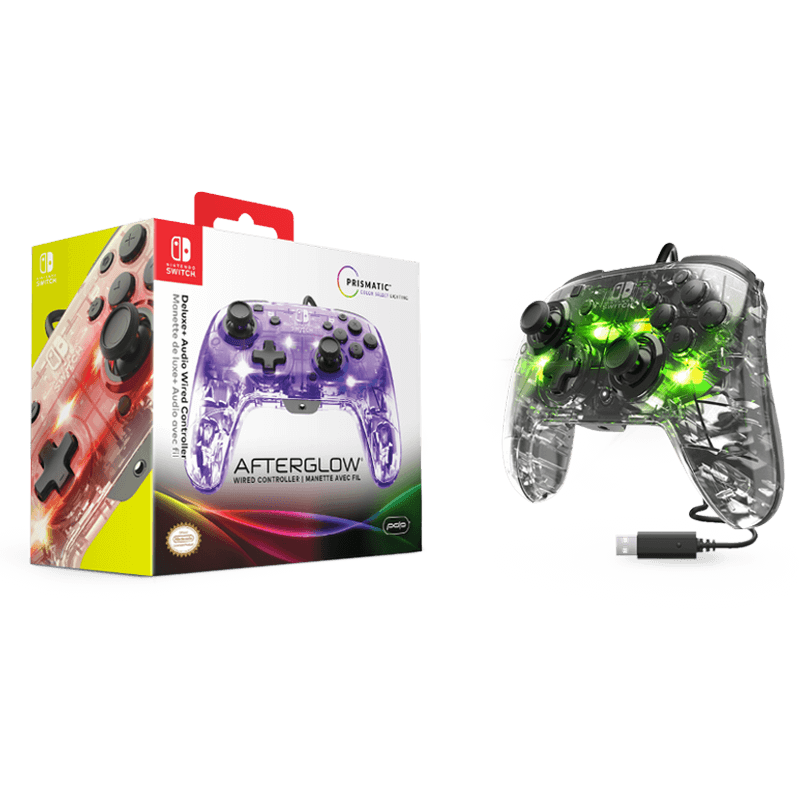 As you can likely already tell from its name, the Afterglow Deluxe+ Audio Wired Controller for Nintendo Switch is a gamepad that really emphasises its looks. Much like the classic Gameboy Colour consoles of old, you can see the innards of its hardware through transparent plastic, only it ups this aesthetic one further by sprinkling in a good amount of Prismatic LED lighting. The Afterglow Deluxe+ does exactly that, glow in a range of attractive colours once you hook it up and play.

The basic design of PDP’s controller mimics the exact shape of Nintendo’s official Pro controller, and this is great because it’s quickly become one of the most comfortable ways to play. The only real difference is an additional “program” button located south west of the right analogue stick, which works as your primary way to switch between the Afterglow’s four possible light modes. These include the ability to let it smoothly fade between colours and having it change with stick movements.

Style is far and away one of the core reasons we think Nintendo Switch die-hards might be interested in grabbing the Afterglow Deluxe+ Audio Wired Controller. In this way it succeeds for the most part, offering up various ways to have it glow while working as a nice throwback by nature of letting you see through to the inside hardware. If you’ve always been jealous of what an RBG lit keyboard does for a gaming PC, then this is a good way to add a bit of cover to your Switch set-up. 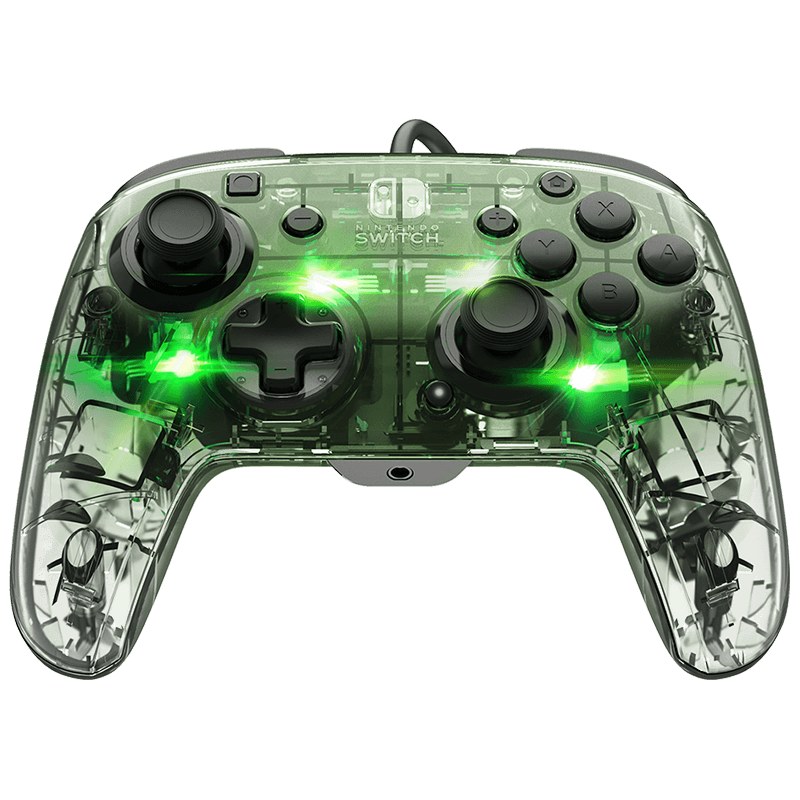 The Afterglow Deluxe+ Audio Wired Controller always feels incredibly comfortable and safe to hold. While it might lack the textured grip you’d find with Nintendo’s Pro controller option, PDP has been careful to follow the same shape and basic outline to ensure that it feels just as satisfying to hold. As the famous saying goes “If it ain’t broke, don’t fix it”, and that’s exactly the approach PDP has taken with this controller’s comfortability aspects.

One minor area where the Afterglow does iterate upon the Pro’s core design is in its analogue sticks, which here are concaved to offer added reliability. This comes in especially handy when playing competitive Switch shooters like, say, Splatoon 2 or Overwatch, making it less likely that you’ll thumbs will ever slip off by accident. The D-pad and face buttons prove to be just as reliable, rounding out what is an incredibly comfortable – and lightweight – Switch gamepad for TV play.

Performance-wise, there’s not too much to report on. PDP’s more stylish Pro controller replacement functions perfectly well, registering all our button inputs without any problem. The back triggers offer just as much good feedback as any of the face buttons, and the lighting modes that are affected by your presses always register without an issue.

One big feature of the Afterglow Deluxe+ Audio Wired Controller to not overlook is its 3.5mm audio jack, which does an exceptional job at supporting in-game audio and any USB chat. It’ll support any wired headset with or without a mic, but obviously you’ll need one with a mic for your own voice to be heard across online games. Volume is adjusted on the fly using the same program button that handles light changes, the only difference being that its controlled using the D-pad instead of triggers.

Another flexible function that the Afterglow’s offers is the ability to map any button to one of two back paddles. These work in a similarly way to most other third-party controllers that offer it, letting you set any of the triggers or face buttons to a paddle that is easily clicked with just a small left or right squeeze of the gamepad. Don’t want to jump using the B button? Just squeeze if you want to. Some controllers get this wrong by making it easy for you to click these by accident, but the Afterglow always held up nicely. 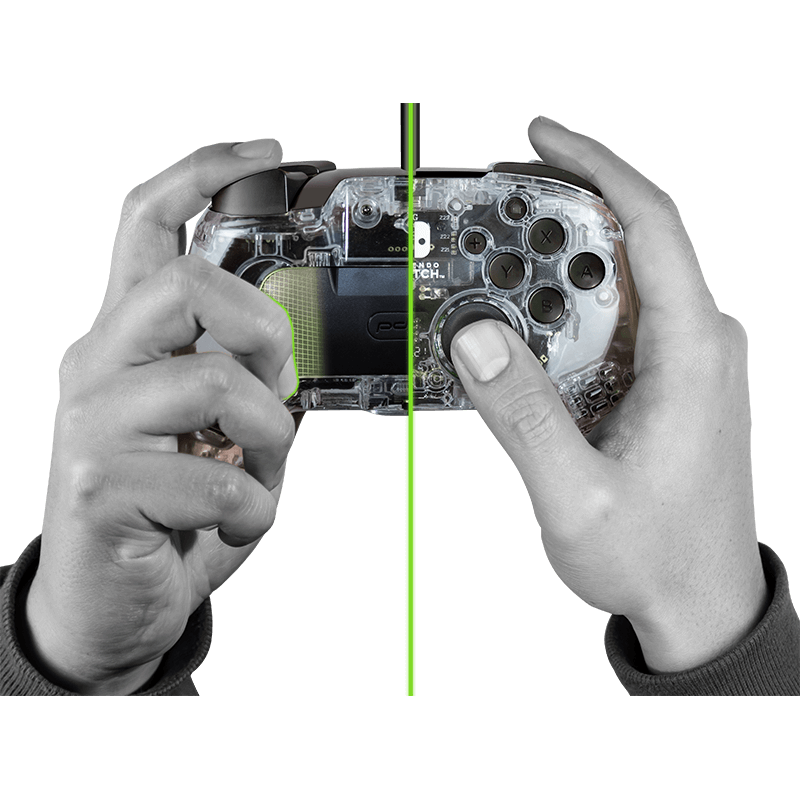 We’d already made mention of this in the intro, but it is really hard to like Afterglow Deluxe+ Audio Wired Controller when you discover its price point. Whereas Nintendo’s official pro controller would set you back anywhere in the region of £59.99, here PDP has kept the barrier to entry incredibly low by setting the cost at closer to £30. Sure, it is wired, but considering how lightweight it is, the added flexibility regarding button inputs and the cool transparent aesthetic, we think it strikes a good balance.

Overall, the Afterglow Deluxe+ Audio Wired Controller is a solid attempt at a third-party option that truly offers Switch players that like playing on the big screen something different. The controller feels good to hold, set up is incredibly simple and the LED lights are bright enough without ever feeling too distracting as you play. If you can get passed it being wired, the Afterglow has a lot to offer Switch players not looking to break the bank.