Ever since the original Game Boy hit the market in the late 80s (yes, that’s right - the original Game Boy was released in 1989!) handheld gaming has been something that many of us have found appealing. The ‘freedom’ of being able to play your favourite games anywhere, without being tied to the traditional console & TV setup.

We have seen many handheld consoles over the years: Nintendo has always been a dominant brand in that space, and their series of consoles from the original Game Boy all the way to the latest Nintendo Switch OLED Edition have been hugely successful with generations of handheld gamers.

However, with mobile phone capabilities continually improving - many of the major gaming brands have started to invest in cloud gaming and xbox, possibly more so than any others feel they are well positioned to take this to a new level (due to Microsoft’s huge network of data centres around the globe). Their offering? Xbox Cloud Gaming (xCloud).

What is Xbox Cloud Gaming?

Originally called “Project xCloud”: the service is simply Microsoft’s own cloud gaming platform. It offers gamers more than 300 Xbox Series X|S, Xbox One, Xbox 360 and original Xbox games, which can be played on PC/Mac as well as Android and iOS mobile devices, all via a data connection.

It essentially works in exactly the same way as an online streaming platform, such as Netflix: the only difference is you are streaming games rather than movies.

How does the gameplay work?

Xbox’s cloud gaming platform is aimed to run in parallel with its consoles, meaning that, in order to use the service you need to have an xbox console to connect to, as well as an active Xbox Game Pass Ultimate membership. To play on any device, you simply have to log in to your Xbox account, either via a web browser or the xbox mobile app.

How much does it cost?

The Xbox Cloud gaming service is included in the Xbox Game Pass Ultimate membership - meaning that there is no additional cost for game pass users.

What is the difference between the Xbox Cloud Gaming and Xbox remote play?

These work in a very similar way, they both stream the content to your phone - the difference is that with Xbox Cloud gaming you are accessing Microsoft’s servers (from wherever you are in the world) - whereas with Xbox remote play you are accessing your own console & that becomes the device that is streaming to your mobile device. For Xbox remote play you also have to sync your device to your console.

For both Xbox Cloud gaming and Xbox remote play - you need to have a data connection, meaning if you are wanting the best gaming experience, you will want to ensure that you have optimum internet connection. The second thing to consider is playability with the controls on your device. This can be particularly frustrating on mobile devices which use the touch screen functionality in the gameplay: this can be detrimental to the gaming experience as it can be difficult to accurately use the controls and they also take up part of the screen. The best solution for this is to get yourself a mobile gaming controller.

If you are familiar with our blog, you may well have seen our article a few weeks back - covering a hands-on review of the Nacon MG-X portable gaming controller. However, the Nacon controller is for Android users only - so we thought we’d take a deeper look at some more of the options currently available (don’t worry iOS users, we’ve got you covered).

As mentioned above, we recently got our hands on the nacon mg-x and we weren’t disappointed, you can watch our full review of it here. 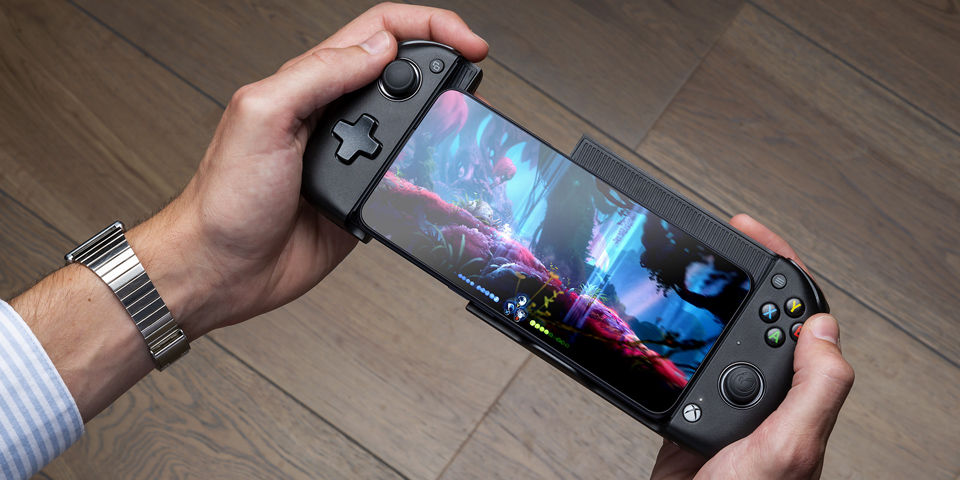 In summary though, it’s a premium quality controller - providing a good gaming experience for android users. Unlike other controllers on this list, it doesn’t run off your phones battery, meaning that it can offer up to 20 hours of gameplay, without draining your phone. Average retail price in the UK is around £80.


If you’re an iOS user the Nacon MG-X is pretty useless to you. Let’s look at something specific for iOS use. This controller attaches via the iPhone lightning port and uses the phones battery to power the attachment, however the usage on this is comparable with a set of lightning connected headphones - so won’t be draining your battery too quickly. The controller doesn’t feature a battery but does have a charging port to allow pass-through charging when in use. 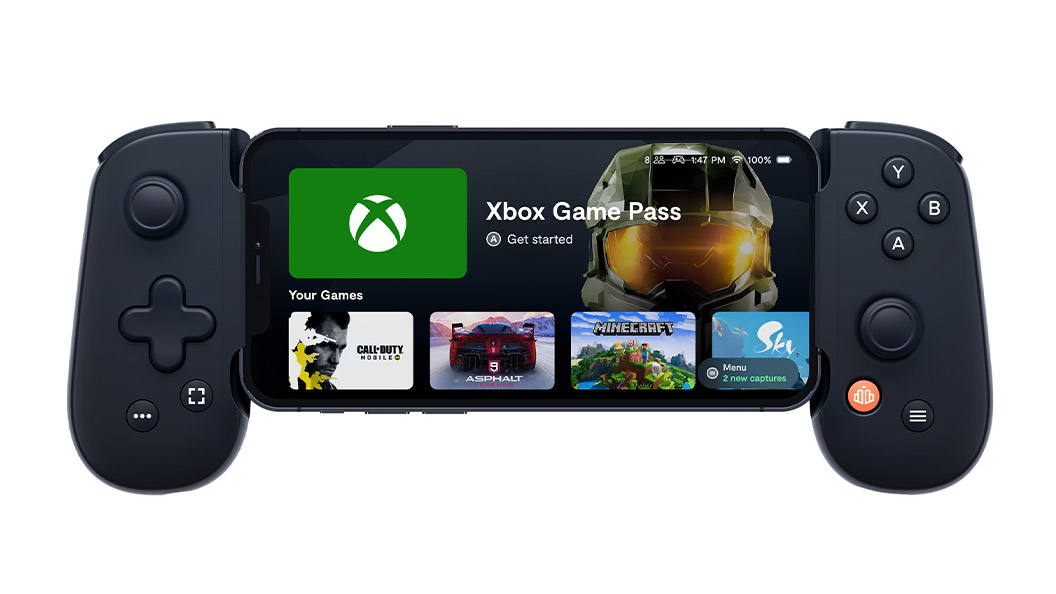 The controller also includes its own app, allowing you to play more than just xbox game pass games, the app also allows you to screen record and share. Retailing at around £99.99 it is an expensive bit of kit, but as it is the only dedicated iOS controller on the market, we feel it’s definitely worth the money.

Razer will be familiar to most gamers, they are a serious player in the gaming market - and not wanting to be out done, they too offer a portable gaming controller: the Kishi. 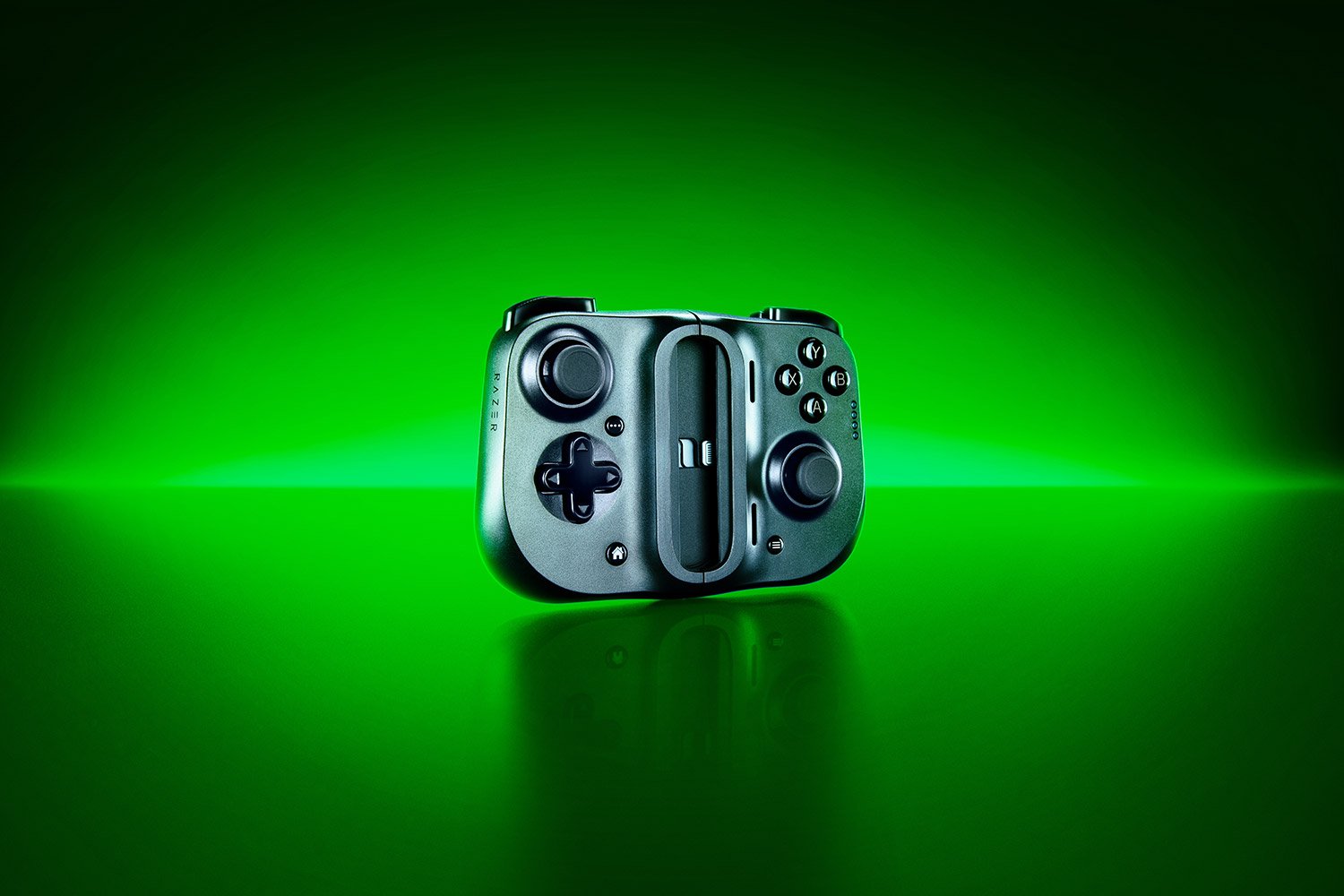 Similar to the two listed above the kishi connects via your phone charging port, meaning that latency issues are reduced (as with the others). One big difference from Razer is that the controller comes in two specific variants, android and iphone, meaning whichever OS you prefer, you can get yourself a controller to suit your needs. The kishi retails at around £79.99 in the UK, which does make it a cheaper option than the Backbone for iOS users, whilst matching the price of the Nacon for Android uses.

Portable gaming is definitely something that will be appreciated by many gamers out there and as the technology and infrastructure continues to grow, game developers will likely shift development towards that. It’s definitely worth getting excited about.