The Nintendo Switch Lite has now officially been out for a week and a half. And in that brief time, Nintendo’s first ever hardware revision to its highly popular hybrid console has swiftly proven to be a gigantic hit amongst gamers. We ourselves witnessed a host of great deals relating to it on launch day, giving people further incentive to trade in and trim down by picking up a Nintendo Switch Lite.

The new console cleverly pares back the already great design to a handheld-only device that is much trimmer, a lot sleeker, and roughly £100 less than the original launch Nintendo Switch model. Everyone is a winner. Or are they? You see, many of us are still wondering: What exactly is the best Nintendo Switch Lite colour?

Grey, Yellow and Turquoise all have their merits as far as ideal launch colours go, but luckily there is a way for us to determine more precisely which Nintendo Switch colour people are identifying with most. We’ve crunched the numbers and pulled in from our own Console Deals data statistics to lay the Switch Lite colour debate for good. We’ve even included the as yet unreleased Zacian & Zamazenta Edition in the equation to help paint a more accurate picture. 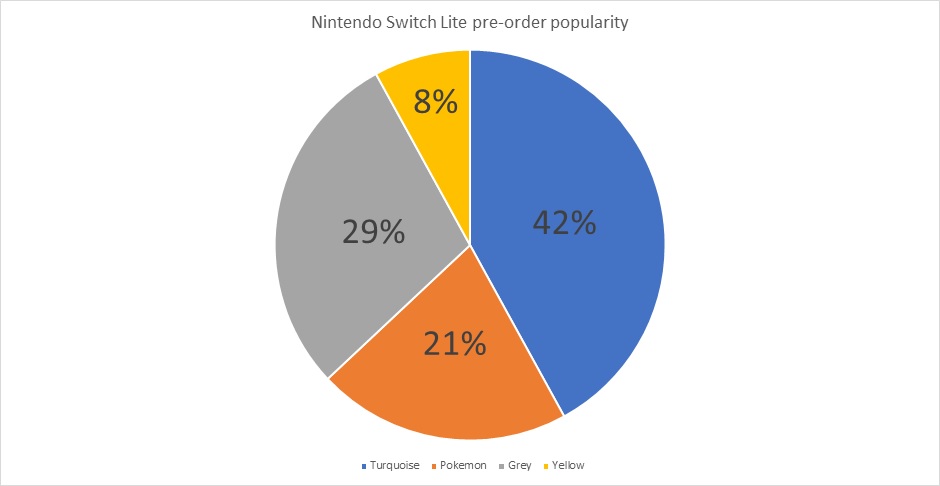 The Console Deals site has received thousands of hits to the Nintendo Switch Lite product page and thousands of clicks. The above chart is based on our analysis of more than 20,000 data points from thousands of visits to give us the definitive ranking of Switch Lite colours, and as you can see it’s an outright win for Turquoise with 42% popularity. Following up behind it in second place is the standard Grey option, but more interestingly is how the Zacian & Zamazenta Edition has already leapt passed Yellow.

What's more, we fully expect to see the Zacian & Zamazenta Edition Nintendo Switch Lite catch up to Turquoise and Grey further once it’s officially released on 8th November. Nintendo recently reported that the Lite actually underperformed slightly below their own expectations, with week one sales numbers in Japan being just shy of 180,000 – far from the 300,000 figure forecasted. We think the imminent release of this special edition Switch Lite could be playing into this.

We’ll continue to keep you updated with how these figures flux in the lead up to the Zacian & Zamazenta Edition’s release. Until then, you can find your ideal Nintendo Switch Bundle by taking a look at our main deals page.