The internet was abuzz yesterday with the news that Nintendo would be revealing a "new interactive experience" for the Nintendo Switch. What would it be? A VR headset mount for the console? Alternative Joy-Cons with different button layouts? A new amiibo-based game? Well, if you thought any of those, you're wrong, because it turns out it's a cardboard fishing rod.

Nintendo have always been known for their innovative peripherals. From the NES Zapper through to 64DD to the mother of all controllers, and Nintendo Labo looks to be continuing that trend of left-field thinking. Combining the Switch and the augmented reality capabilities of its Joy-Con controllers with cardboard models, Labo enables a wide range of gaming possibilities.

The Wiimote was made to be fixed within plastic peripherals, and Nintendo has now gone one step further by letting people build their own 'Toy-Con' accessories, which make use of the tech within the Joy-Cons to do some pretty cool stuff. 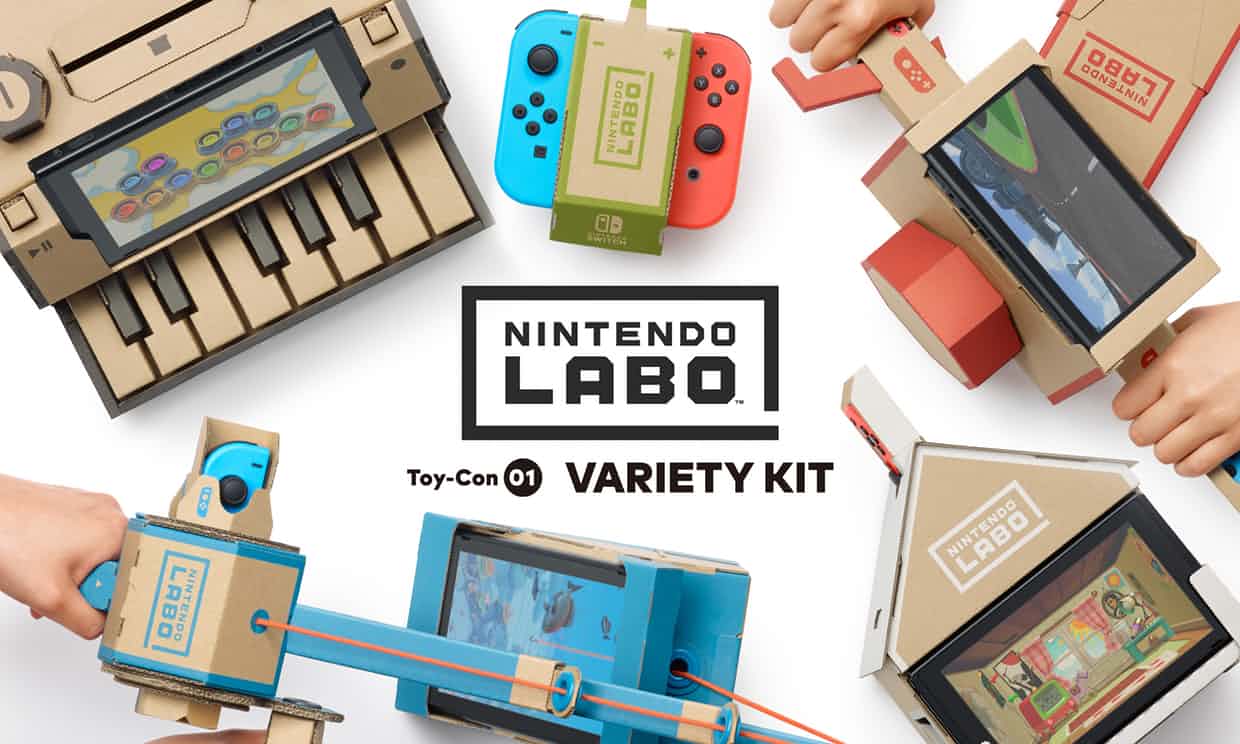 The best way to get a feel for Labo is in the video above, but if you're not able to watch, it looks like there's 6 models to build. Nintendo's site has already separated the kits out into two different packs - the 'Variety Kit' and the 'Robot Kit'.

The Variety Kit contains the following:

What are the Nintendo Labo games?

A usual prerequisite for a car to work are wheels. The Labo car, which is controller via the Switch's touch screen while the Joy-Con are attached to the car itself, has only stilts, but yet can still move. The movement is achieved by the Joy-Cons HD rumble feature, which allows for extremely precise vibrations within the controller.

The body of the Switch console is placed length ways within a cardboard dock on the floor, and responds to the reeling mechanism within the rod as you play.

The Switch sits inside a cardboard house and shows the 'inside', while a button on the outside lets you twist the features on the screen.

This cardboard kit sits inside a set of motorbike handlebars, and allows you to steer in the game using motion controls.

The piano kit is the centrepiece of the video, and is, according to The Guardian, the most complicated design in the Variety Kit. It's also probably the most technologically impressive kit, with the IR camera on the Joy-Con relaying to the Switch which key has been pressed by watching the reflective tape on the bottom of the keys.

The most complex Labo kit (hence why it is purchased separately) is the robot kit. Comprising of a backpack, a headset and controllers, the robot kit is an almost VR-like experience that puts you in charge of a robot on the screen.

What else is coming from Nintendo Labo?

Nintendo include extra cardboard within each kit and say that you will be able to "use your Toy-Con creations... and bring them to life." This suggests that not only will you be able to cut out your own designs, but programme them to act as you'd want as well.

The video also showcases some designs that aren't featured in the two kits, including a swan, a steering wheel with a pedal, a camera and more.

And for those of you worrying about the durability of the cardboard, The Guardian also report that replacement kits without the need to buy the software again.

When is Nintendo Labo out, and how much does it cost?

Nintendo Labo is out in Europe on April 27th. There's no word on pricing currently, however in the US, the Variety Kit will cost $69.99 and the Robot Kit $79.99.