If there’s one thing video games in 2019 continue to prove it’s that everything old is now new again. There are a couple of remasters and remakes constantly releasing which reinforce this, but only one Triple-A game this year promises to give a classic title the full reboot treatment. That game is Call of Duty: Modern Warfare. Yes, developer Infinity Ward is back in the saddle, looking to breathe new life into the Modern Warfare sub-series of Call of Duty, almost 10 years since we last saw it.

We can’t reinforce enough that 2019’s Call of Duty: Modern Warfare isn’t in fact a remake, but instead a whole new spin on the same universe. The term ‘modern warfare’ means something entirely different now compared to what it did back in 2007, and it’s this particular angle that this new version looks to be taking. Infinity Ward has promised a game focussed on “realistic, emotional moments”, and here we’re deep dive into what this means and how Call of Duty: Modern Warfare 2019 compares to the twelve-year-old original.

A fresh campaign that emphasises realism

This new interpretation of Call of Duty: Modern Warfare has already garnered a lot of controversy regarding its campaign mode, with many being sceptical of its portrayal of troubling war themes in the pursuit of realism. The infamous Modern Warfare 2 mission “No Russian” is what this new direction has been closely compared to, but developer Infinity Ward is insisting that the single-player campaign will be straight in its portrayal. Simply put, expect similar bombastic set pieces as seen previously, only with a bit more reality and honesty sprinkled in.

Call of Duty: Modern Warfare is the first single-player campaign we’ve had from the series in a while, with 2018’s Call of Duty Black Ops 4 scrapping the concept entirely to exclusively focus on a Battle Royale mode. This has led many franchise fans hungry for a new Call of Duty thrill ride, similar to the benchmark set by the original Modern Warfare back in 2007. That game saw you pilot an AC130 in the dead of night, sneak through a radiated Chernobyl and engage in a high-speed highway chase. Expect the same type of thrills in the 2019 Modern Warfare.

The return of fan-favourite characters

Ask anyone what they loved most about the original Modern Warfare trilogy and there’s a high chance they’d say the characters. This is a little unusual for a triple-A first-person shooter franchise, but it’s a testament to the voicework and design of personalities like Soap, Ghost and Captain Price. So, while it might disappoint some to learn that Modern Warfare (2019) is a reimagining of the original story rather than a true sequel, rest easy knowing that all your fan-favourite characters are back in some shape or form.

Already confirmed to return is the main man himself, Captain Price, who now will be played by new actor Barry Sloane. He replaces original actor Bill Murray to deliver a more youthful, but no less heroic modern military hero. What’s more, advancements in technology now allows actors in the new Modern Warfare to not only have their voice portrayed, but likeness too. Modern Warfare (2019) is the first entry of the subset series to take advantage of full motion capture, again feeding into the ethos of making the game feel as realistic as possible.

It should probably go without saying that the multiplayer portion is being shaken up significantly for this new version of Call of Duty: Modern Warfare. The biggest change comes from an increased emphasis on tactical gameplay, where breaching doors, using night vision and new map exploration are all necessary for winning matches in most PVP modes. Everything comes together to give Modern Warfare’s multiplayer a more realistic feel, upping the tension while keeping the same sense of risk/reward the franchise has become known for.

One of the new multiplayer modes to feature in Modern Warfare (2019) is called Ground War, which will enable up to 100 players to duke it out on one map. Such a scale was previously not possible with 2007’s Call of Duty 4: Modern Warfare, indicative of the whole game’s willingness to improve over its predecessor. Still, it isn’t all about going big, as another new mode to Modern Warfare is Gunfight. It’s here where two teams of two go at it against each other in a match lasting forty seconds per round.

Lastly, the ever-popular Spec Ops mode makes its first return to the series since Call of Duty: Modern Warfare 3, replacing the longstanding Zombie mode that has been the keeper of the co-op flame until now. As is hopefully evident, Modern Warfare (2019) is bringing things back to basics in its multiplayer, returning Call of Duty to its gritter, grounded approach that goes best with the Modern Warfare sub-brand.

A safe bet for Call of Duty: Modern Warfare bundles

Call of Duty is such a big annual series, it was always pretty much a dead certainty that we’d see some PS4 console bundles tied into the release of Modern Warfare (2019) this October. This was the case back when Black Ops III and Call of Duty: WWII before it launched on Sony’s platform, offering players that are looking to upgrade or are yet to pick up a PS4 the ideal way to instantly jump in. We recently got the confirmation that there'll be two Call of Duty Modern Warfare PS4 bundles coming: One centred around the 500GB Slim while the other is a 1TB PS4 Pro. 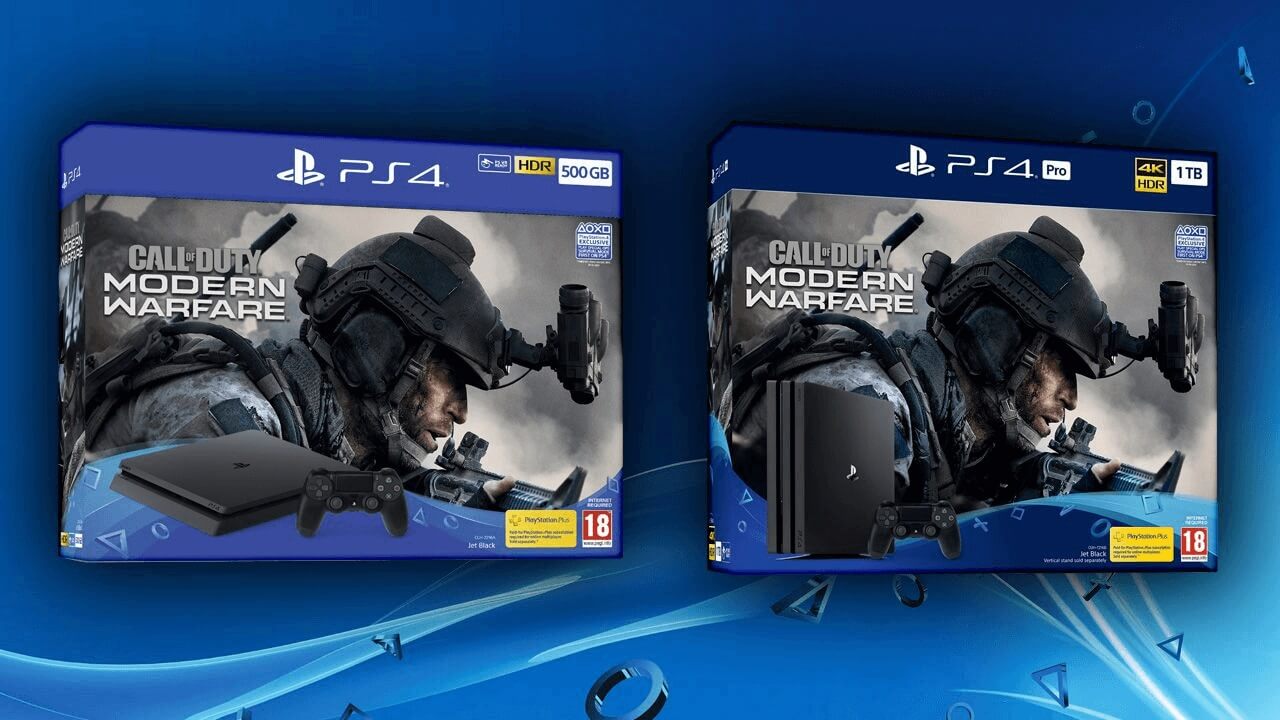 While Call of Duty: Modern Warfare Xbox One players will have to purchase their copies separately from a console bundle, those wanting a new PS4 can get the game free with a new PS4 Slim or souped-up PlayStation 4 Pro bundle. Both SKUs also come with a free trial for PlayStation Plus and a standard Dualshock 4 controller, giving you all you need to get started online to take part in the returning two-player Spec Ops mode. The original Modern Warfare never saw a PlayStation bundle back when it released in 2007, but this was a time before Call of Duty was the behemoth it now is today.