Halloween has been a popular holiday in the States for some 30 years now, but its only very recently that us British have similarly taken the spooky season completely into our hearts. Most players will likely opt for a true survival horror game in honour of setting in some scares to get into the mood, but what if you’re a younger player or a parent wanting to share in the excitement together? Fear not as Nintendo has got you covered with today’s release of Luigi’s Mansion 3.

A sequel to 2009’s Luigi’s Mansion 2: Dark Moon for the Nintendo 3DS, this third entry of the cult classic series sees Mario’s gangly brother once again enter a ghostly premises in the hopes of saving his friends. Armed with his trusty new Poltergust vacuum, the G-00, he needs to work his way up 13 haunted floors of an ominous hotels, battling and trapping all manner of ghosts and ghouls. It’s the same formula series fans will know, albeit with a few new extra twists. Being on Nintendo Switch now means that the series' ghostly antics also pop like never before! 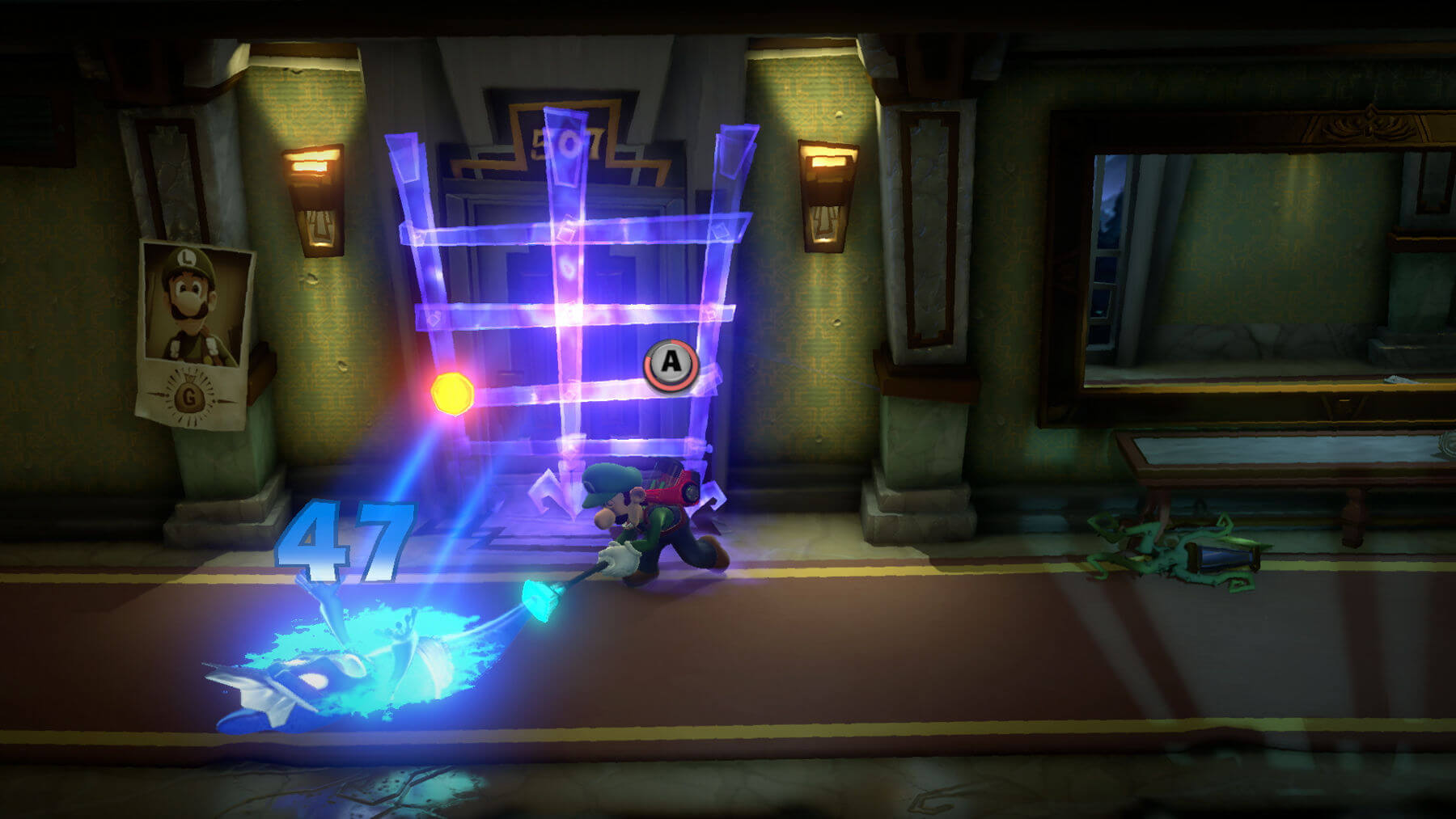 The main difference this time around, as already alluded to, is that Luigi’s Mansion 3 doesn’t actually take place in a mansion this time around, but a skyscraper hotel instead. Every floor of this hotel centres around a different spooky theme unique from the last, whether that’s in the form of a Medieval period castle or a classic 1920s movie set. All 13 floors are filled with their own secrets to chase down and puzzles to solve, most of which are typically solved with the many functions of your G-00 device.

Your primary way to trap ghost starts with a slam, which will not only weaken your ghoulish foes enough so they’re less willing to fight but also inflict some damage. You can even slam one ghost into another if you really want to show them who’s boss, making it easy to trap two ghosts for the efforts of one. Another G-00 ability is the suction shot, which will see Luigi fire a plunger useful for wrestling enemy shields away. Then there’s the ability to shoot out a burst of air whenever you’re in a bit of a pinch, giving Luigi some height while also blowing away nearby enemies for some crowd control.

Helping this even more so is the inclusion of co-operative multiplayer, which makes its series debut in Luigi’s Mansion 3. The multiplayer mayhem is all possible thanks to a new character, Gooigi, who is like Luigi except he’s much slimier. As one of Dr. E. Gadd’s craziest creations, he works with Mario’s scare-riddled brother as his gooey green doppelganger that can squeeze through grates and walk across spiked bars. Gooigi can access areas that regular Luigi cannot, meaning that you and the other player will need to be smart and work together. 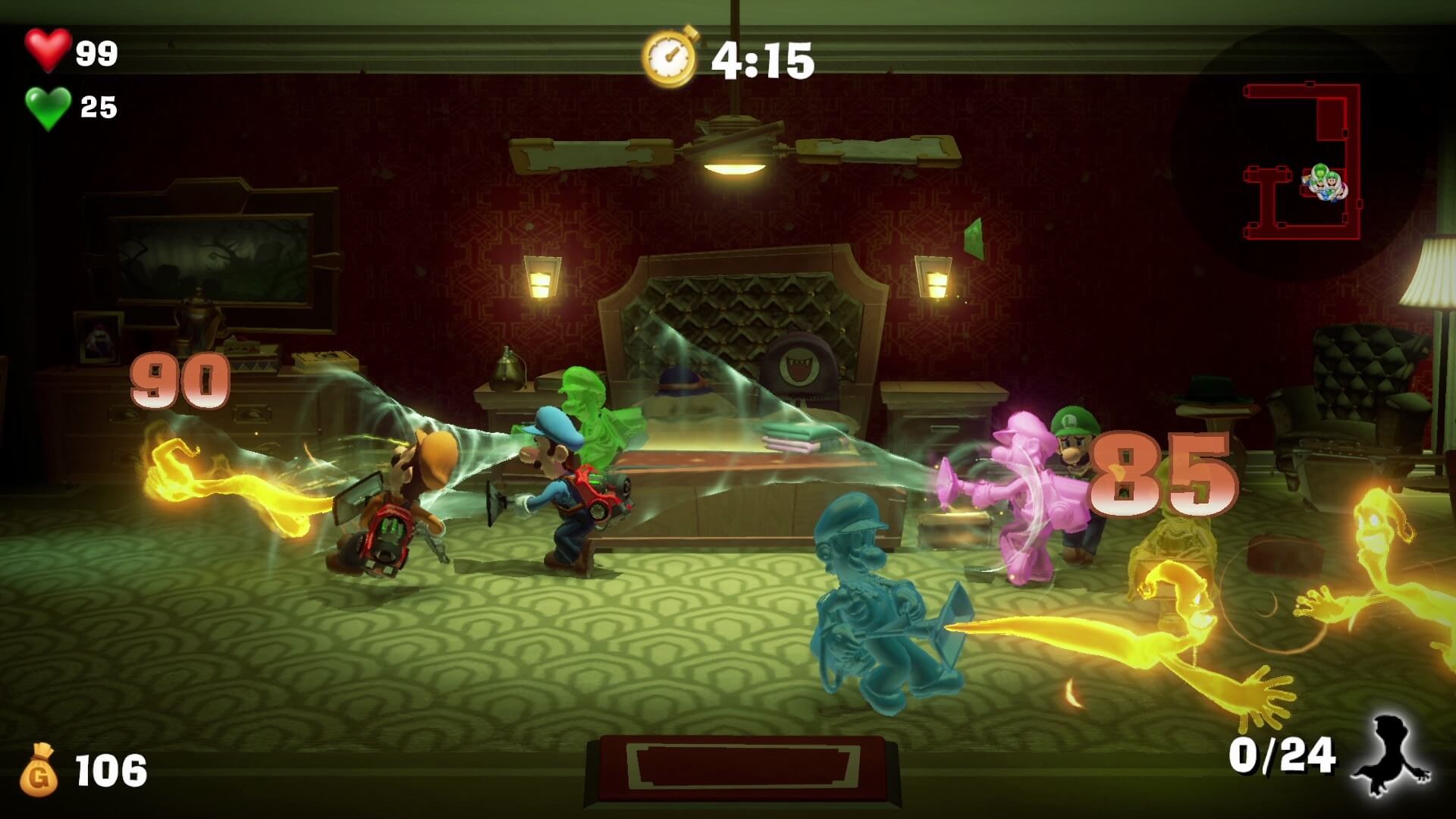 Puzzles in the hotel begin quite simple, before gradually ramping up the challenge. Fear not though, because helping you accommodate these new types of ghoulies are all-new upgrades (like a single-use revive and special G-00 cartridges) that can be used to enhance Luigi’s many ghost-busting abilities. Purchasing them requires coins, which you will find plenty of by just casually destroying the environments around you.

Luigi’s Mansion 3 is only the latest first-party game to ooze that oh-so wonderful Nintendo charm. Therefore, it’s without doubt the perfect family-friendly game to play this Halloween, as it’s filled with humour and characters than every house member can enjoy. The initial Luigi’s Mansion arrived on the GameCube way back in 2001. It’s highly possible that people who grew up playing this first entry now have kids of their own, and so are now able to enjoy Luigi’s new adventure together. Luigi’s Mansion 3 might give you a fright, but one that isn’t too harrowing.

Halloween-centric games that are more fun than frightening doesn’t come around that often, but in Luigi’s Mansion 3 Nintendo has answered the call. Not only is it the first HD entry in the series’ history, but it’s a delightfully charming and colourful adventure that is primed to perfectly set the tone over the spooky season. It’s easy to get lost in a hotel this big, so be prepared to guide Luigi through the scares of it all – hopefully without ever screaming!

The best price for Luigi's Mansion 3 on Nintendo Switch: