A long time ago in a galaxy not so far away, you couldn’t move for video games based on George Lucas’ sprawling space opera. Then the Disney acquisition in 2012 happened, quickly causing the regular stream of great single-player driven Star Wars to dry up. Fast forward seven years, though, and Star Wars Jedi: Fallen Order is extremely close to being out. It promises to fulfil the fantasy that is wielding a lightsaber and force abilities as a Jedi Knight, but where should you buy your copy?

Usually this’d be a fairly straightforward decision. After all, you want to pick up the game for the lowest possible price, right? Well yes of course, but Star Wars Jedi: Fallen Order is such a big release that certain retailers have organised different pre-order incentives only available if you buy from them. Here we’ll break down what exclusive bonuses each participating UK retailer, as well as each edition, helping you choose which is the one you’re looking for.

Before we dive in, though, it’s worth mentioning that none of the pre-order exclusives listed below are essential for playing the game. Most are mainly cosmetic and work simply as a cool bonus for players wanting a few extras. All will likely be made available for everyone some time after its official release. 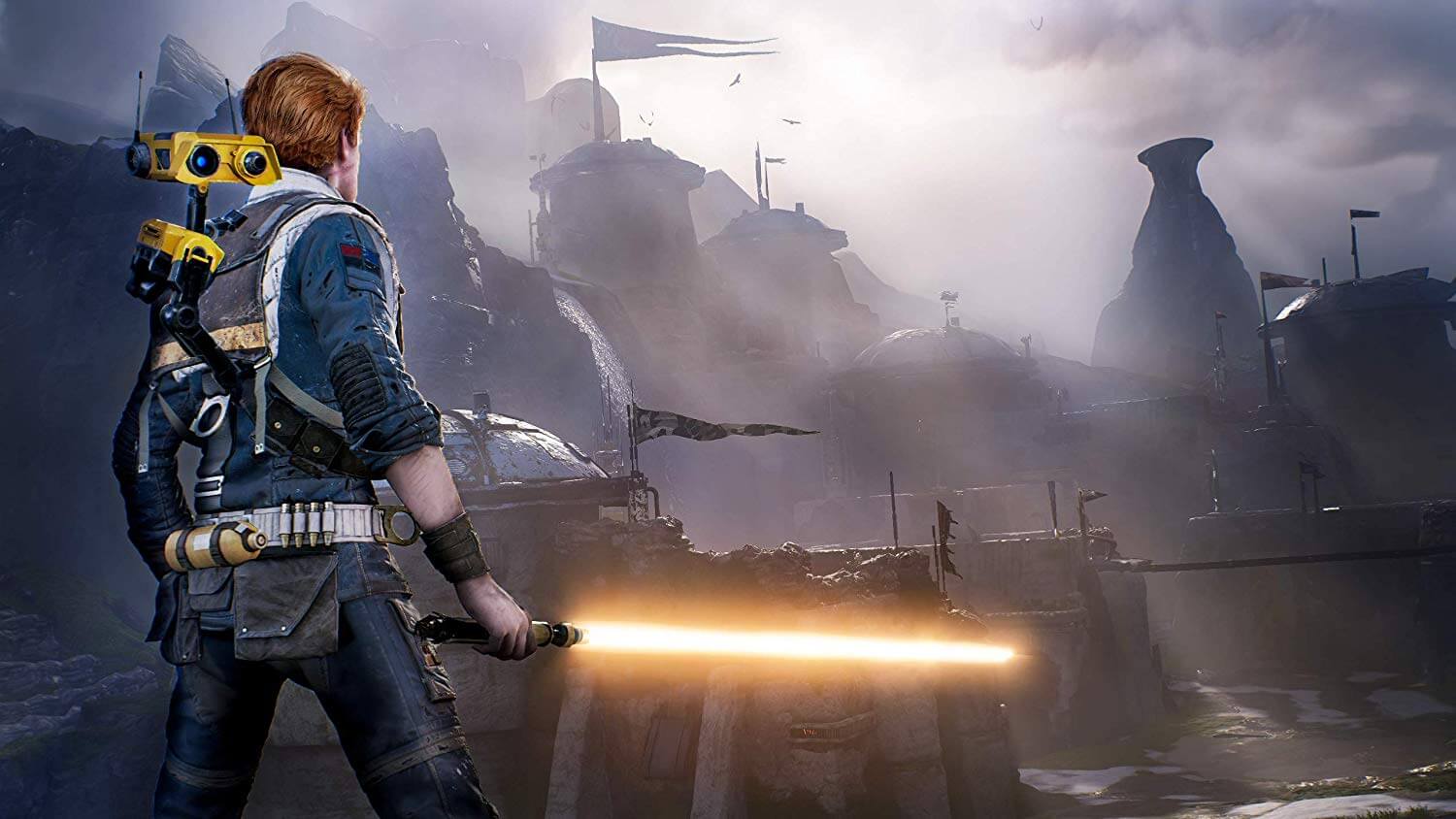 Kicking us off nicely is the standard edition of the game. Those that pre-order Star Wars Jedi: Fallen Order ahead of release will get a bunch of nice cosmetics, including two new hilt designs and an all-new lightsaber colour. Officially named Mygeeto and Umbaran, the two lightsaber hilts boast an inherently unique design and are just a few of many you’ll collect throughout the game. The exclusive blade colour mentioned is a warm-lit orange, which will replace the traditional blue when equipped.

Lastly, a standard edition pre-order will also grant you access to two exclusive skins. One is for BD-1, who acts as your trusted droid companion in the game. Traditionally he features a red and white colour scheme, but the pre-order one featured is actually gold. This love of gold continues for protagonist Cal’s main vehicle, the Stinger Mantis, with the extremely shiny Gold Squadron skin. Here’s a breakdown of the standard edition pre-order goodies: 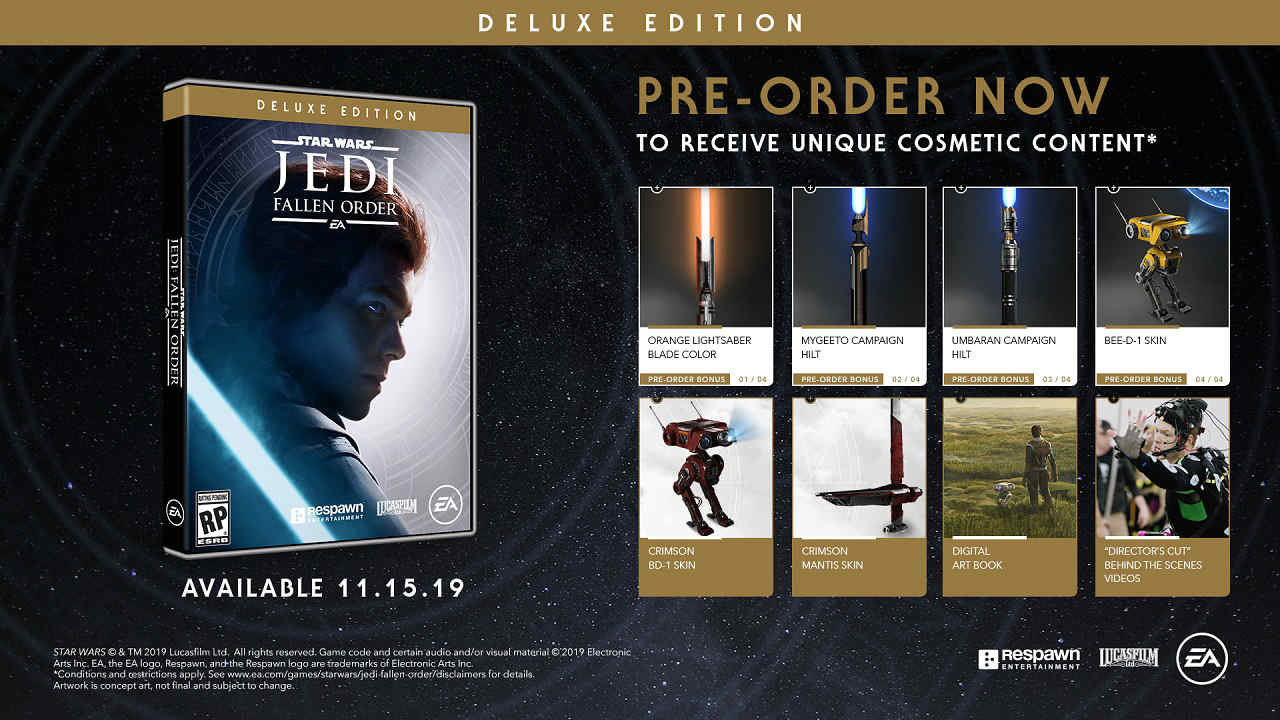 Those that pre-order the deluxe edition of Star Wars Jedi: Fallen Order will receive everything listed in the standard addition above, plus a few more digital extras. Perhaps the most notable us a fully-fledged digital art book, which can easily be browsed on your PS4, Xbox One or PC and features plenty of concept art documenting how Respawn Entertainment went about building the world of Fallen Order. From ships to planet locations, the digital art book reveals all.

Other extras featured in the deluxe edition include another exclusive skin for BD-1, which will paint your droid companion crimson instead of the standard white and red. This crimson aesthetic also carries over to the final deluxe edition bonus, which is a Crimson Mantis skin for Cal’s primary space vehicle. If you want to go crimson, it’s the deluxe edition to go ahead and pre-order. 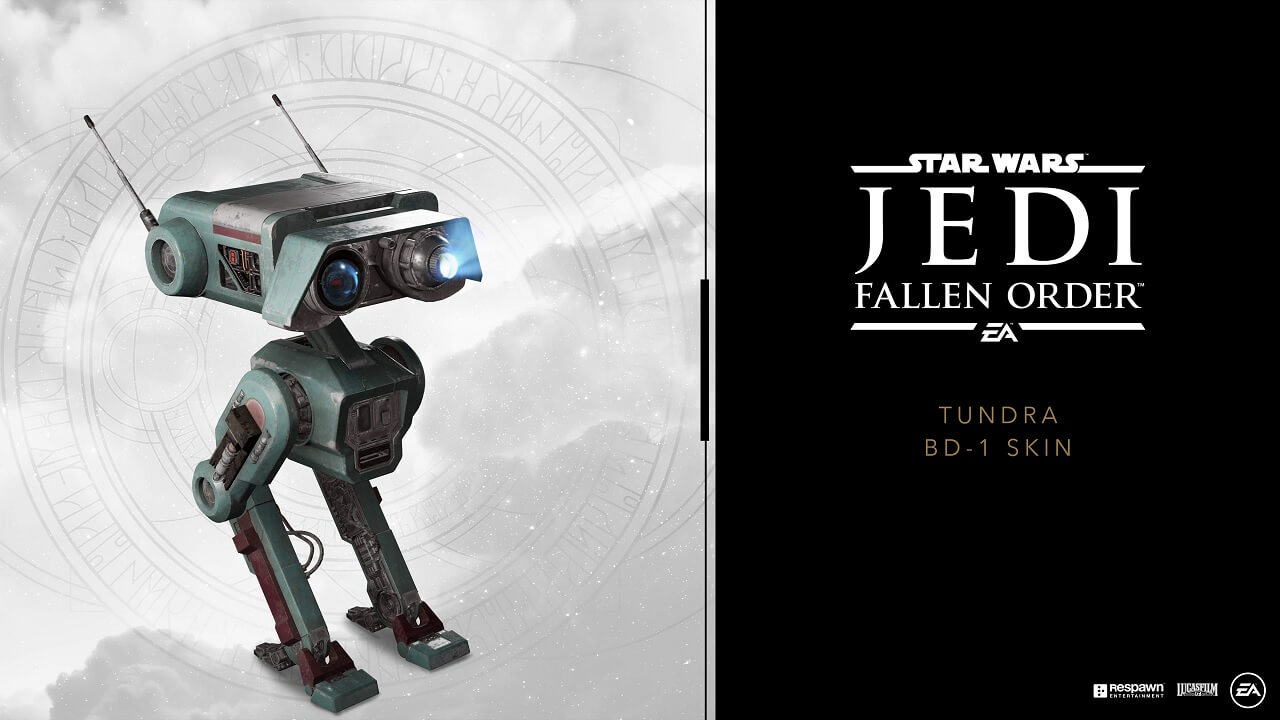 GAME are always one to nab a few extra goodies for the year’s big PS4, Xbox One and Nintendo Switch releases, but it’d be fair to say that what you get from them for Star Wars Jedi: Fallen Order is fairly minimal. Essentially, you get all the pre-order bonuses offered in the standard edition available from most retailers, such as the stinger mantis skin for your Cal’s ship, two hilts, the orange blade colour and a yellow Bee D-1 skin, but there is one a small extra.

Purchase Star Wars Jedi: Fallen Order from GAME and on top of these you’ll receive another new and exclusive BD-1 skin: Tundra. As you might imagine this resembles a cool, blue/grey tone, giving your faithful droid companion another special look as he accompanies Cal on his journey. It’s an extremely small bonus, but one that is very much exclusive to GAME. So, if you want to enjoy BD-1’s Tundra skin, you now know where to go.

Where should you pre-order Star Wars: Jedi Fallen Order?

Most people will likely want to pick up Star Wars: Jedi Fallen Order for the cheapest price possible. If that’s the case, you can head on over to our main comparison page for the game where listings are broken down by platform. However, if you want to get every pre-order bonus available on day one when Star Wars: Jedi Fallen Order releases, you’ll want to visit GAME and select the Deluxe edition. Currently this is around £62.99 – that’s roughly only £13 more than the standard edition elsewhere.