There just aren’t enough video games that make werewolves the main focus. There, I said it. We know this because, unlike in film or TV, the only real attempts at depicting them properly since 2015’s The Order 1886 on PlayStation have spawned from the same wildly successful tabletop RPG. While last year’s Heart of the Forest may be considered the brains of the duo, using a visual novel format to represent the bold decision-making featured in the original game, Earthblood is absolutely the brawn. You cannot expect less from a third-person actioner that lets you transform into wolf forms at will. But regardless if you’ve played the original Werewolf: The Apocalypse board game or not, there’s still a lot of fun to be found in Earthblood despite its limited budget and hokey presentation.

In Werewolf: The Apocalypse – Earthblood you play as Cahul, a member of the Fianna tribe of Irish werewolves attempting to dismantle a shady energy corporation intent on destroying the natural environment. In the world of Werewolf: The Apocalypse this poses a bit of a problem, as werewolves have grown to become one and be at peace with mother nature, only using their transformative combat skills and rage to aid the spirits of the forest in which they refer to as ‘Gaiu’. It’s an interesting enough premise, and one indicative of an RPG with almost two decades of history. And while boardgame fans will likely get a kick out of specific reference and recognisable term, I had no preconceived knowledge of it and Earthblood worked just as well.

The game’s core hook is that you’re able to transform into one of three states: Human, Lupus and Crinos. The first is pretty self-explanatory but it’s the latter two that helps separate Earthblood from the sea of other action games centred on a balding gruff everyman. The Lupus form is the most dog-like, letting you easily infiltrate the Endron corporation’s many industrial facilities in order to gain intel. It’s in these instances where developer Cyanide shows its knowledge of stealth gained from working on the Styx series, even if the level of covertness in Earthblood is rather basic and not even in the same league.

Having these three forms to pick from, however, is all about giving you as a player options. Would you rather work your way through a room of goons as secretly as possible, using vents to sneak past them and barking to distract your attention? Or, would you rather embrace your rage and nature as a human/wolf hybrid, splattering blood on the walls at every opportunity? That’s where the Crinos form comes in. 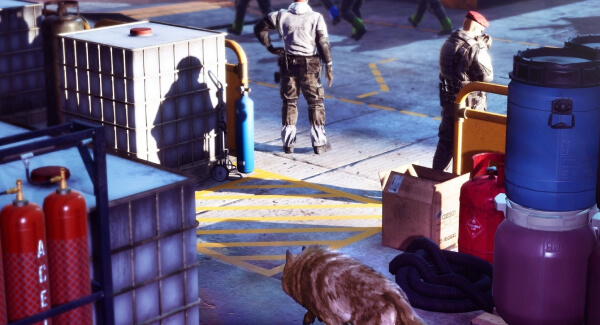 Much more along the lines of what you’d see in traditional werewolf fiction, transforming into the Crinos state is when you’ll engage in direct combat. It’s a mix of light, heavy and air-based attacks that all feel very empowering to deploy the first couple times. So often, though, would it just descend into bouts of endless button mashing, which I guess makes sense given the form’s inherent ferocity, but doesn’t make for the most in-depth battle scenarios.

Thankfully, Cyanide has tried to counteract the combat’s repetition via a skill system that lets you improve and unlock new abilities for each wolf form. Your Crinos, for example, can actually switch between agile and aggressive fight modes, with one letting you dash around faster to avoid taking enemy fire while the other sees you focus on inflicting damage. Earthblood’s combat is at its best when it backs you into combat corners like this, forcing you to switch battle tactics so as to never become overwhelmed. Ensuring this doesn’t happen gets progressively tricker as new enemy types are introduced.

What unfortunately lets it down on the stealthier side, as alluded to, is just how dumb the enemy AI can be. Always sticking to regular travel patterns, they’re so easy to exploit and take advantage of, especially once you’ve fully upgraded the crossbow available in your human form to target and take down several enemies at once. The heavier goons that are gradually introduced mostly do a better job at spotting you immediately on sight, but beforehand I’d really need to go out of my way to get seen, which sometimes I secretly wanted just so I good stretch my Crinos muscles a bit more. 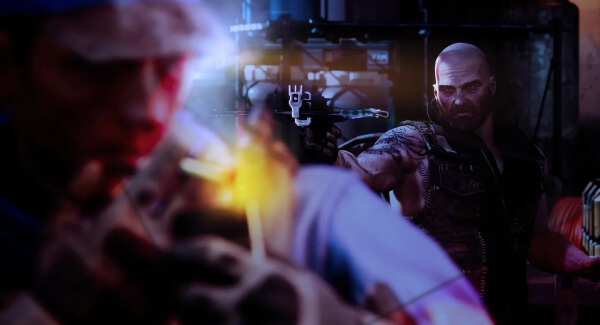 The story in Earthblood is perfectly fine, but can come across as a little tropey at times. It’s a shame that such emotional cliches as losing a family member, getting exiled and being a poor father to your daughter crop up so often because the general lore and universe-building around Cahul’s personal conflicts is interesting to dig into. One minute you’re ripping soldiers apart while unleashing some rage in a research facility, the next you’re consulting in the spirit realm with a physical manifestation of the forest. It’s very weird but it works.

Also a let down is the presentation. I played on PlayStation 5 for this review, but even on this platform it’s clear that Earthblood doesn’t quite reach the level of Triple-A polish it would perhaps like to. This is most evident during dialogue sequences, where you as Cahul engage with characters to learn more about them in the lead up to a mission: the animation in these instances is just very stiff and awkward; it always reminded me I was playing a video game.

Then there’s the general repetition of environments. Because while your home base of the forest isn’t the most visually diverse, even worse are the various science facilities you spend the main bulk of missions in. Most areas consist of corridors and rooms painted it grey, which becomes boring after the first few hours. Earthblood tries to shake this up roughly two thirds of the way through by having Cahul transfer to a prison facility for plot reasons, but you know what colour the walls are in a prison? You guessed it. Grey.

It’s clear that Earthblood is working with a limited budget compared to what some players might expect from a third-persona action game released in 2021 – and the repetitive level layouts, bland interior colours and noticeably stuff character animations only make this clear. Even still, though, the roughness of Werewolf: The Apocalypse – Earthblood lends it a certain charm, the kind of which we haven’t really seen since the heydays of the PlayStation 2 when we were awash with budget-tier titles based around a cooky concept.

Luckily for Earthblood, the freedom to choose between going stealthy or loud during most mission scenarios, combined with upgradable wolf states to play around with and an interesting core universe, sees it sidestep most of the criticisms those budget games. At the end of the day it’s a hokey third-person action game that wants to make transforming into a werewolf feel as satisfying as possible, and on this front it succeeds. Earthblood is the game equivalent of a cult classic B-movie: not big or very clever yet most certainly a fun ride. And who knows, it may just pique your interest into trying the tabletop RPG it’s based on.

3/5
Earthblood's limited budget and slight presentation woes don't distract from how fulfilling it can be to transform into a werewolf and just wreck shop. The PS5 version is a bit of a let down in terms of showcasing the power of next gen, but overall this is a B-movie style third-person action game that gives you the freedom of how to act in combat situations.

Werewolf: The Apocalypse - Earthblood is out now on PlayStation 5, PlayStation 4 and Xbox

Get the best Werewolf: The Apocalypse - Earthblood price below: