The original Monster Hunter Stories was a colourful take on Capcom’s beloved series that didn’t get the love it deserved. Swapping real-time action for traditional turn-based strategy, players who were previously put off at the thought of slashing away endlessly at monsters finally had a way of getting accustomed. If only it wasn’t left stranded on the Nintendo 3DS and released late into that console’s lifecycle. Luckily, none of these problems exist for this follow-up on Nintendo Switch, which combines all the best Monster Hunter ideas with a slower pace and much larger emphasis on – you guessed it – story. Couple this with the core hook of creature collection, and you have a charming strategic spin-off that’s also a less intimidating entry point into the Monster Hunter universe.

The first thing to mention is that Monster Hunter Stories 2: Wings of Ruin, rather kindly, requires no knowledge of the previous game’s events. Players familiar with the 3DS original will enjoy the odd Easter Egg or character reference, sure, but overall this is a fresh start for newcomers wanting to collect and do battle with a range of menacing beasts. This you do as a budding young tribesperson aiming to be the best rider out there, teaming up with your cat pal Navirou and mysterious girl Ena to learn the secret behind an evil force known as the black blight.

For as gorgeously animated and vibrant as Monster Hunter Stories 2’s cutscenes are, the story here never reaches beyond this basic premise until the final few hours, and is more so an excuse to have you travel through 5 different regions. This presents an opportunity for you to explore various dungeon-like monster dens, most of which allow you to top up your creature collection by stealing and then hatching a coveted monster egg. Small tweaks to the JRPG formula like this help separate Monster Hunter Stories 2’s gameplay loop from the likes of say, Pokémon, while still having it be familiar to fans of turn-based JRPGs. This is ultimately still a game about collecting monsters and training them up to be stronger, after all, but with a heap of Monster Hunter’s style thrown in.

The monsters themselves are unsurprisingly the stars of the show, with classic creatures like Pukei-Pukei, Khezu and of course the Rathalos all out in full force. The latter is only available for you to access at certain points due to their role in the story, but over 200 others are littered throughout the lands and yours for the taking (should you feel brave). The fact you can ride on the back of each monstie while exploring areas makes the pursuit to hatch and train them even more addicting, knowing that each will boast a special ability like roar, rock break or vine climb, that can help you reach awkward areas. This is the very first time we’ve seen such monsters presented in Stories’ trademark cutesy style on a HD console, and the wait has largely been worth it. 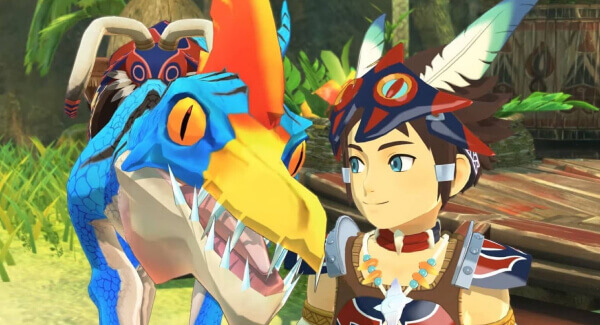 In terms of battle themselves, the mechanics are incredibly simple but surprisingly deep. The core of combat revolves around a rock, paper, scissors-like system, where three attack types – Power, Speed and Technical are strong or weak against the other. Couple this with the need to switch out your rider’s weapon type depending on the monster limb your targeting, and there’s a good degree of strategy sprinkled in – far beyond what the game’s anime aesthetic would initially lead you to believe.

Doing well in wild or rival rider battles also sees you build up what’s called kinship, which either you or your lead monstie can use to unleash special skills or combine together to deploy one screen-shaking manoeuvre. This is one aspect that Capcom has taken fully by the reigns, designing large-scale battle animations that look unique depending on your equipped monster and are always a visual treat for the eyes. It’s especially so when you have an AI partner by your side and they also achieve maximum kinship. Sure, you can ramp up the speed of battles and miss out on such amazing sights, but why would you?

Then, if that wasn’t already enough, Monster Hunter Stories 2 also forces you to stay engaged far beyond simply spamming A, thanks to QTEs that can trigger whenever monsters clash with the same type of attack. Simply put, a surprising amount of thought has gone into the way battles play out. And while very rarely will you find yourself truly challenged to the point of fainting, such dynamism is appreciated when you do want to grind out higher levels for your current group of monsties. 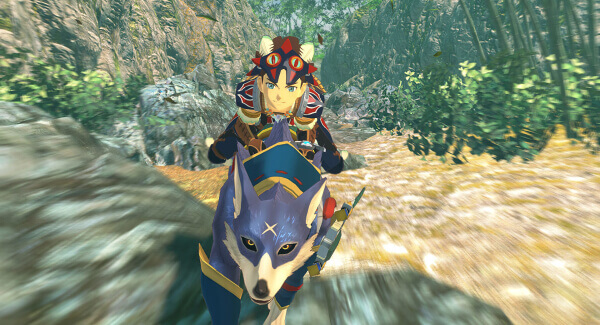 Less exciting is Monster Hunter Stories 2’s frame rate, which can sometimes takeaway from the beautiful environments you explore by dipping well below 30 fps. This issue is most evident whenever you’re in large open areas populated by a lot of independent monsters, though there is some precedent for this in simple hub towns, too. It’s a bit of a shame considering that Stories 2 opts for a less realistic art style than Monster Hunter Rise back in March. That game played extremely smoothly running in Capcom’s RE engine, yet here the ride is just a tad rockier in terms of stability. However, it in no way detracts from the thrill of turn-based battles and becomes isn’t so much an issue when exploring the more compact monster dens.

Thankfully, on a more positive note, Monster Hunter Stories 2 has plenty to keep you hooked after finishing the some 20-hour long campaign. From sub-quests that task you to venture out into previously overlooked areas to an in-depth gear system where you can create new weapons and armour using slain monster pieces, visiting each region’s hub town is always worthwhile. The stats and experience you accrue from engaging with these optional mechanics aren’t as in-depth as those you’ll find in a mainline Monster Hunter game like Rise, yet all are a competent way to extend your playtime. Plus, fully levelled riders seeking a harder challenge can always seek out Royal Monsters that populate the endgame, or can hop online to place their monster squad through the paces.

Overall, Monster Hunter Stories 2: Wings of Ruin is a colourful turn-based spin on Capcom’s beast-slaying franchise that has a lot of heart. It may not elicit the moments of dread and high excitement the main series is so good at capturing, but as a way to onboard new players who want to know more about what Monster Hunter has to offer it succeeds. It’ll also scratch the itch of JRPG veterans wanting an alternate way to “catch them all” with just a bit more story and visual flourish. Despite small technical hitches, this is comfortably the Nintendo Switch’s second big Monster Hunter hit of the year.

4/5
Monster Hunter Stories 2 is a charming turn-based adventure that will satiate the hunger of long-term JRPG fans, as well as players seeking a low barrier entry point into Capcom's beast-slaying series.

Get the best price for Monster Hunter Stories 2 on Nintendo Switch below: